St. Maclou (the flooring people) showed up at 8.15 a.m. this morning so they were off to a good start. The main guy was French and I'm not sure if he's done work for me before - I seem to vaguely remember him. Turns out he lives in St. Jeoire so when I told him that Jordan and Jen had just bought there he said he might know him, being as these trades often end up working together. Said he would look out for him! He bought "Mr. Muscle" with him, who had been contracted to help with the heavy lifting and getting what was left of my stuff into the garage, and guess what! It all fit!! I'm delighted as I really didn't want to have any of my stuff left outside over the next four days (even if it was covered up) as it is cold and damp at the moment. Mr. Muscle was from Kosovo and I think he might be just starting to learn the trade. Either way, they worked very well together, were polite and efficient, and four hours later they were done for the day!

The main guy had told me that I had to chose whether I wanted to be "cemented in" or "cemented out" because once they had put down the agréage - aggregate? (the best translation I can think for that is "cement patching" - you know, what they put down to level the surface off), I had to leave it to set for about seven hours. At first I thought I might go in to Geneva for the day but in the end decided I would just stay home, so they cemented me upstairs with a baguette, a chunk of cheese (and a bottle of wine if I'm being perfectly honest) and that's where I stayed from noon to 7 p.m.!! It wasn't even that bad actually as my TV room is upstairs and I also had my sewing machine, computer and books so it was actually rather nice to have an excuse to do absolutely nothing for a few hours!

I sent my friend a photo of my living room and he said "damn, you could have set up camp at my place"! Nice timing dingbat! It would have been nice to see him but I wasn't going anywhere after mid-day was I! It turned out ok in the end, but my neighbour had told me that when they laid their new floor about 35 years ago they had to leave the cement to set for 48 hours so they ended up putting a ladder up against their external balcony and climbed in and out their bedroom window that way!!! I kinda hoped the products they would be using had improved since then and thankfully they have. Can you imagine me climbing in and out of my house over the bedroom balcony at my age!! That'd be a picture for Facebook!

So the workmen knocked off for the day at noon and the fitter called me this afternoon to confirm that he will be back to start laying the floor at 8 a.m. on Monday morning. Uurgghh! I'm really not a morning person, so I told him if I was still in my PJs to just let himself in (he burst out laughing so I guess the French might be starting to get my sense of humour)!

It's weird though because it's amazing how big downstairs looks with no furniture in it. And that, I think, is all the more reason not to put some of the stuff back once the new floor is down isn't it! A good time to declutter methinks. And, with all my stuff pulled out and stored, I don't think my place has ever been so clean, nor will it ever be again I suppose! That being said, I'll be glad when it's done and life can get back to normal - just in time to start thinking about decorating for Christmas eh! 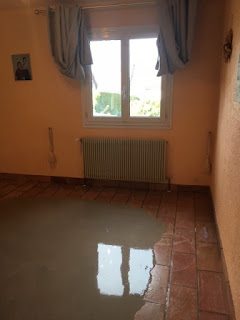 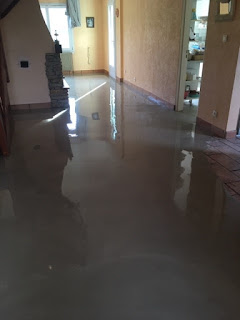 Tomorrow my friend and I are off into town to the exhibition centre as I received two free tickets for the "Cap Senior" fair. GAL Voyages sent me the tickets (this is the bus company we do many of our trips with) and they will be there and handing out their new programme for 2020. I know Norway and Denmark are on their agenda but I don't know about the rest so we'll see if anything sparks our interest. It is a bit weird, though, to be getting invitations to "senior" events!!! Crikey I don't feel that old but then I guess, technically, I am a "senior". Apparently when I'm 65 I'll start getting invitations to the free "seniors" Christmas lunch in the village too! I imagine it's a lunch because everyone has to be in bed by 6.30 p.m.! Oh well! I wonder if they provide someone to chew your food for you if it's tough!
Posted by Treaders at 19:46