The weather has been pretty crap this weekend, constant rain and wind, although I can't say it's been that cold. But it's been a day to curl up on the sofa and do bugger all - and that's fine by me, although goodness knows I have enough I could be getting on with!

St. Maclou, the flooring people, are coming to my place three weeks from now on the Friday to move all of my furniture out of my downstairs in order to begin laying my new floor the following Monday. That means I have to get cupboards and shelves emptied, plants moved and so on so I really could have used my time more wisely today I guess. But no matter, every time I come upstairs I bring a plant up, or if I go down to my basement I take something down there from the garage, as the big stuff will be going in there. I'm usually pretty methodical so hopefully there won't be one last mad rush the day before as there is quite a bit to shift. Anyhoo, I'm sure it'll get done! Zen!

So I've spent pretty much the whole day sitting on my backside reading - and it's been great! I finally caved in and signed up to Amazon Prime (€6/month) as I was on Amazon France looking to buy a copy of "The Marvelous Mrs. Maisel", but it doesn't seem as though it's available to buy yet. I hear it's great! But, of course they suggested it on Amazon Prime so I decided to take up their offer of a free 30-day trial. To be honest, I buy enough off Amazon that it might be worth it anyway just to get free shipping, but we'll see. I'm also organized enough that I write these things down and don't forget to cancel them if I decide not to take it any further. In the meantime, I'll see how it goes!

In my mail box this week I got a toy catalogue (already?) for Christmas stuff. I have put a "no advertising" sticker on my mailbox but somehow this one got through. But I decided to look through it at the board games as I'm getting a little tired of some of the ones we've been using and think we need to mix it up a bit (before I die of boredom?), so I went ahead and ordered Cluedo and a game called "Ta mère en slip" or "you're mom in her knickers" off Amazon! 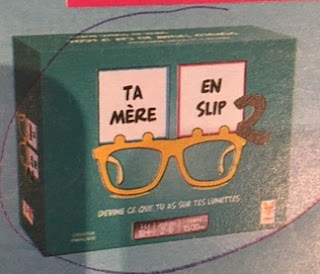 It's basically the same as the game where they stick a post-it on your forehead and you have to guess who you are, although in this game you get two cards to slot into the glasses, one with a person and the other showing that person doing an activity. One that I saw was "Donald Trump on Tinder" (which may not be any more far-fetched than "your mom in her knickers" to my way of thinking)! Hopefully it'll be here before our next board game evening chez Jordan and Jen - should be!

I guess bad weather maybe also puts us (me?) at risk of "internet spending" too doesn't it. It's so easy to just click on something on Amazon or wherever and "poof" it's yours, although to be fair, I'm really not that kind of unmitigated spendthrift (unless it's for second-hand books for myself - my Achilles heel)! I have recently placed a couple of orders but they are for Christmas presents and such and a birthday gift for Lily, my DIL, who will be 32 in December. I think (I hope) I know Lily's taste - it certainly looks to be the case for books as she and I seem to have the same collection - so I'm pretty sure she will like the framed Banksy wall hanging I've ordered for her. I know I do so fingers crossed! 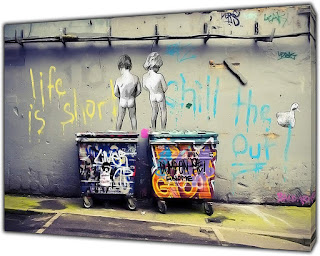 I was at a bit of a loose end yesterday though so I decided to check out a beautician's/spa place I had seen on my way to Tuesday afternoon yoga. I haven't been for a facial for years so I've decided I'm going to make it a more regular, monthly treat now because there ain't no pockets in shrouds! So I did a bit of googling, looking to see what Yves Rocher had to offer as I like their stuff, but the YR where I go is difficult to park at and this place is just 10 minutes down the road from me. So I've gone ahead and booked a facial for next week and will see how they pan out, with an eye to a massage next time if they are any good! My idea of bliss - well that and getting lost in a sweetie shop that also sells books!

I can now afford all these wonderful new experiences because I've just received my end-of-year "closing out of accounts" on various taxes and utilities and seemingly I'm doing really well. I mentioned before how my monthly electric bill has already gone down by €18/month just by switching supplier (and should drop by another €30/month if Max is right). Anyway, I just received my annual bill for trash collection (€118/year), which is a definite improvement over the €180/year I used to pay. The drop came about when I went into town to pick up my access badge for the local recycling centre (only local taxpayers are allowed to use it) and the lady asked me if we were still four people living in my house. When I told her that I had been on my own since 2015 she punched in a different code and I got the lower rate as a single householder! I hadn't thought of it before but I was very grateful that she asked! Actually, though, that got me to thinking that we haven't had "trash collection" round here for around 10 years - nothing is picked up from outside your home any more. You have to take even your household rubbish to bins dotted around the local villages (plus all your stuff to the recycling of course). At first I hated it but now I actually prefer it as I can get rid of my rubbish any time I want and don't have to wait for a weekly/fortnightly pick-up by the bin men. But, I tell a lie, this system has been in place longer than the 10 years I thought because it was already in place when my ex was still living here and he's been gone 10 years, so it must be about 15 years. By 'eck doesn't time fly!

Anyway, on top of the decrease in my garbage bill, I also got my annual water bill (€146/year) which somehow is down €71 over last year!! I'm not sure how that happened (although my armpits just might be a bit funky I suppose) but either way I'll take it! On top of that I have two other taxes which I guess would be the equivalent of the council tax in the UK. Taxe d'habitation and taxe foncière. They, of course, will never go down but they've only gone up by about €2/month each so I'm happy with that. Hence, my wonderful savings and decision to get a monthly facial/massage!!!

I also had my monthly "ladies lunch" in Geneva with my girlfriends last week, and Liz was telling me that she had finally been given an appointment with the French authorities for mid-January for her initial interview for French citizenship. So we were right, it takes about a year! I guess that means I'm looking at next July then. Oh well. We have a "citizens' document" you can download giving basic info about France, its history and its traditions but, to be honest, we don't think that's the kind of thing they are going to be looking for. When was Bastille Day? Everyone learns that of course (14 July 1789 in case you're interested). What other people have said they were asked was why you want to become French and they want to see if you truly are integrated into French life - are you a member of any groups or associations, etc.? So ya see, my being "Madame la Présidente" of the local sewing club (we had our AGM last week) might stand me in good stead anyway, even if I can't bloody well sew!!! That plus all the different activities I have joined in at the local community centres! I knew I was right! I guess you just need to show that you don't only hang around with your own nationality, you speak the language and are well integrated (board game evenings anyone?)! I'll find out more after Liz has been for her interview I guess! I'm glad she's going first though!

And finally, my birthday came and went in September, and I was just thinking the other day that I didn't receive a card from Bryan! And Bryan never forgets my birthday! I met Bryan on my very first Solos holiday to Turkey in 2010 and he was a really sweet older chappie. We used to chat a lot, although our relationship was never like that! Before we flew home he handed me a copy of the book "The Power of Now", which he told me he carried everywhere with him. (Actually I already had it somewhere but couldn't be doing with it. Seems like it must be a "man" thing because Steve loved it too)! Anyway, I digress! I told Bryan if he was going to give it to me he had to write something in the front, which he did, and we have stayed in touch ever since. He has been out here twice for a long weekend and loved it, asking specifically to go back to Annecy the second time also (no hassle for me, I love Annecy)! But he never forgot my birthday (or Christmas) and always sent me a message on Armistice Day (coming up). I sent him a couple of messages but got no reply, which is not like him at all, so sadly, I'm thinking there might not be good news! He would be in his mid-70s I guess and had had heart surgery at the beginning of the year (which went well), but … I won't bother him again right now but if I don't get a message on 11 November I guess I'll know there might be more bad news, although how I would ever find out I'm not sure. Here's hoping though as he is a sweet guy and an absolute gentleman! Fingers crossed for Bryan!
Posted by Treaders at 18:02