By the rivers of Babylon ...

As I have mentioned previously, I love working in Geneva, not only because of the stunning scenery but also because it is a multicultural city, with all the added benefits that that brings.  A real Babylon.

Switzerland has four official languages (bet ya didn't know that).  It is principally Swiss-German speaking (around 70% I think, maybe a little more), followed by French and then Italian.  The fourth language is a language called Romantsch, which is spoken in a very small part of the Grisons area of Switzerland.  In fact, here in Geneva, signs are pretty much written in either three or four languages (German, French and Italian, and very often English is also added).  Signs like "do not use the lift in the event of an emergency", for example, would most likely be written out in those four languages. Thankfully (for me), Geneva is French-speaking, as my German is "iffy" to say the least. But, with Swiss-German being so prominent, there are a lot of Germanic names, with lots of "zeit", "stein", "hoch", etc. in them.

Recently my company held a large meeting with different "interests" being represented from all over the world.  One particular European company had recently changed its representative, and we were trying to find the name of the new person representing them so that the Chairman could have the name available, if necessary.  I started looking through lists and had to stifle the giggles. There was one person whose Germanic-sounding name - had I had to read it out loud - I would have pronounced as "horse-shite".  My colleague took one look at the name and immediately came up with "oh shite"! I don't know what we would have done if this had turned out to be the new rep - luckily for us, it wasn't him.  Phew.

In a similar vein, many years ago I was on a training course in Geneva when I got talking to a woman who worked as an interpreter.  She told me that during meetings dealing with the Palestinian situation, the Palestinian peoples were referred to as the Palestinian population of the West Bank - forgive me if I got that wrong but it was quite some time ago.  Anyway, she explained that during simultaneous interpretation you simply don't have the time to refer to the "Palestinian population of the West Bank", so the interpreters had to shorten it to "West Bankers".  She was in the interpreters' both one day when one of her colleagues came out with the supreme Malapropism of "Best Wankers" - she said they didn't know where to put themselves but had to forge on and hope no-one noticed!

And finally, as my mom is Welsh I spent most of my summers up in Betws-y-Coed with family, and it was fascinating (to me at least) to see things such as signs written out bilingually in English and Welsh.  Of course not everyone speaks Welsh so when information was available in English and they needed an official translation into Welsh the text would have to be sent off to the translation department.  The sign below made the news some years ago and certainly gave me a chuckle. 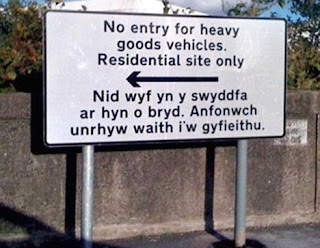 The English text is self-evident.  The Welsh, however, apparently reads "I am not in the office at the moment ....".  Ha - lovely.  So it's not just me then!

Posted by Treaders at 14:53 No comments:

A different post from the one I had planned!

Well as of a couple of hours ago Geneva is on high security alert with police actively looking for several young men who may (or may not) be deemed to have terrorist intentions.  It has something to do with a car with Belgian plates coming through the border Tuesday night (I think) and being seen leaving again 24 hours later.  The UN and other organizations under intense security, police outside the Russian and French missions, in particular.  The US mission is pretty well protected anyway.  Not a nice feeling at all, particularly when you think tens of thousands of people cross the Franco/Swiss borders here every day - me included.  Let's hope .....
Posted by Treaders at 15:10 2 comments:

Why you should always wear your Sunday best!

As I mentioned in a previous post, from a fairly young age my dad suffered from heart problems, having several heart attacks, numerous scares and two by-pass surgeries.  Indeed, as a young girl I remember lying in bed at night listening for the creak of the floorboards and just praying it wasn't mom running downstairs to call the ambulance again.  A horrible time for all of us of course but, in retrospect, it was funny on occasion too.
Now while I know I probably shouldn't be talking about my dad's underwear here it is central to the story.  Dad - and most men of his generation I guess - wore boxer shorts, for comfort and probably because there wasn't much by way of choice anyway.  One particular day when he was at work, the elastic around the waistband of his boxers and the actual material separated company but the elastic didn't actually break.  So dad, not really knowing what else to do, just pulled the elastic up and put it over his head in order to keep his "drawers" from falling down.
Well as (bad) luck would have it, that day he was taken ill at work.  They called the ambulance to take him to hospital and called my mom at her place of work to meet the ambulance at the hospital. Several hours later it was determined to be a false alarm and that dad had not suffered another heart attack.  That of course was when mom spotted his boxers in the little cupboard next to his bed.  Well she went somewhat "ballistic" - "oh for God's sake, of all the decent pairs of underpants you have in the drawer you had to wear those!  I swear you do this just to embarrass me sometimes!"  You get the gist of it. To be honest, I suspect it was mostly relief that he was all right and she was just letting off nervous energy, but poor old dad got it in the neck that day I can tell you.

Of course, he made matters worse when he was explaining to her that after they admitted him and the young nurse was trying to undress him as he was lying on the bed, every time she tried to pull his underpants off he sat up!  We all cracked up laughing, but I'm pretty sure he had to dodge a few expletives from mom all the same.  Ahhh tales from another era I think.

I just recently discovered that in Wales, as from today, people who die will be deemed to have consented to becoming organ donors, unless they have opted out of the scheme. I'm not quite sure of all the modalities of it but (as I understand it), anyone over the age of 18 and who has lived in Wales for at least 12 months will be deemed to have given their prior consent to organ donation unless they have specifically opted out.  From what I understand, in the event of someone's death, if there is no "opt out" or if no close relative can be found to "opt out" on the deceased person's behalf, then organs can be taken and used for transplant purposes.  While the scheme  currently only applies in Wales, any organs harvested can be made available to suitable recipients anywhere in the UK.

And you know what, I think this is a wonderful initiative.  Of course people have every right to opt out for religious or whatever other reasons they may have, and I respect that, but for me personally making the assumption that organs can be taken in the absence of information to the contrary is a wonderful step forward to saving lives.  I know if my sons or someone else I loved were in danger of dying for lack of a donor kidney I would be so grateful to any grieving family who took the courageous and selfless decision to donate their loved one's organs, particularly at such a difficult time.

Many years ago I signed an organ donor's card and carried it in my purse.  That must have been over 30 years ago I guess so I am pretty sure that card is now shredded beyond repair somewhere. Which makes me think I must get hold of another one and do the necessary, or at the very least make my wishes known to my family.  Nobody likes thinking of this stuff of course and I'm sure many of us think that as soon as we "sign up", we will then be killed and used as a donor.  Just like making a will - "well if I make a will I'm sure I'm going to snuff it the week after".  But I for one want to be cremated when I die and want my ashes scattered in the mountains, as I don't want a place where my family need to go to feel sad.  For me the dearly departed are all around us so I don't need to be buried anywhere in order for my family to show respect.

Sadly in the last few days rugby great Jonah Lomu died suddenly of complications linked to kidney disease. He was only 40 and left behind two very young sons who now have to grow up without their dad.  Jonah did, I believe, get a kidney transplant but it failed and he died as a result of his illness.  I don't know if another transplant would have been possible for him or even if it would have done any good, but I personally believe that that option should be out there.  To be burying viable organs when our loved ones are dying for want of a transplant is somehow just wrong to me.  Of course I totally respect people's wishes not to be involved with organ donation, but in cases where people don't really have strong views one way or another, I for one praise the Welsh initiative and hope it will prove such a success that it can be rolled out UK-wide, thereby saving lives that otherwise would be lost. 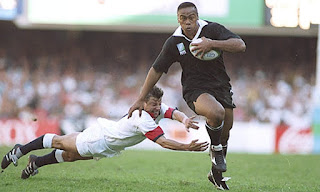