I have been giving this a lot of thought lately.  "Frugal in France" mentioned it in one of her posts recently (sorry I don't know your name) and as far as I can see she is right - women need to have financial independence.  Now I don't mean to start a riot but financial independence makes so much sense - indeed I would see it as a necessity.

Don't get me wrong, when my children were born I desperately wanted to stay at home to be with them and was actually jealous of my neighbours who got to do just that.  But circumstances being what they were I was obliged to work full-time and really felt that I missed out, especially when the kids were little.

Fast forward 20-odd years and I am still working full-time.  BUUUUUT having got divorced after 26 years of marriage I am so eternally grateful to have financial independence.  My husband left me for another woman (that's the good bit) and both kids were still living at home (we'll ignore the fact that he wanted to come back 3 weeks later - yeah right, like that's gonna happen).  In the end I filed for divorce and it was having my job that allowed me to buy him out of the house (don't believe all the stuff you read about women taking men to the cleaners in divorce proceedings) and the kids and I were able to stay in the home we loved surrounded by friends and good neighbours.

Now that I am no longer funding his spendthrift lifestyle and buying fancy clothes and cigarettes for the girlfriend I am actually saving money.  I reckon I cut my monthly bills by € 1,000 a month (yes you did read that right) after he left, and in that I don't include his phone bill, his car insurance etc.  Now I'm not some high-powered lawyer on a fantastic salary, I am a secretary.  The € 1,000 might seem incredibly high but living on the border with Geneva the cost of living is extremely high.

My sister (in Denmark) and I were the first in our family to get divorced.  Not proud of it and there were the occasional "we stuck it out and made a go of it" comments (although not from family who knew the reality of our marriages).  But it was having an income of my own that allowed me to leave an abusive and violent relationship and keep the kids in the only home they had ever known.  I know everyone wants to believe that marriage to Mr. Right is just that and we will all sail off happily into the sunset but marriages do end, death happens and I have seen recent examples of ladies in their 50s who are in dire straits (sp?) due to divorce etc. and it breaks my heart to think of them in that situation with no prospect of retirement.

I guess we always think the grass is greener on the other side.  However, and speaking only for myself, I have to say how glad I am that I still had my job all these years later.  And I now have a peace and contentment that I could never have known existed.

Ted (my dad) was a funny man.  Not always intentionally, but funny nevertheless.  We called him dad of course but he never wanted to be called "grandad" so after the first (of 10) grandchildren, he ended up being called Ted.

He had all these silly songs and sayings which we all remember to this day and they still make us laugh.  I was in Dorset to see my mom recently and my niece mentioned the "wonky sheep".  Mom is from North Wales where obviously there are loads of sheep, so Ted told my niece that sheep have legs shorter on one side to enable them to stand on the Welsh hillsides.  Said niece is now 35 and she was saying that she believed that baloney until she was at least 20!!!  I'm sure she's not the only one out there.  Score:  Ted: 1, niece: 0. 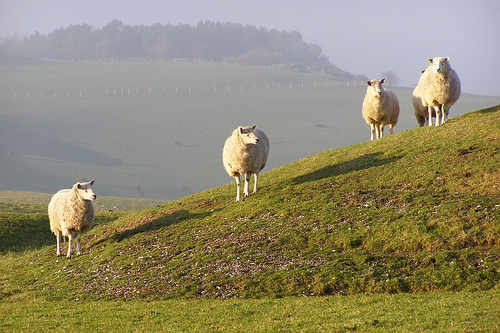 Posted by Treaders at 14:00 No comments: