That's "knackered" in Cockney rhyming slang, just FYI! Well my new floor is all done and I have to say I'm very pleased with Saint Maclou yet again. They show up when they say they will, I stayed out of their hair as much as possible and they did a very good job. There has been a slight problem with my "generic" skirting boards in the living room though because my original tile skirting boards were larger than standard so they had to put the generic on top, and they're not really deep enough! I actually don't mind too much but in some places there is a gap at the top of the skirting board where the new ones don't meet the wall completely, so I will have to put some kind of foam down there to fill the gap. For the time being though, I just want to get everything cleaned up and back into some kind of order! But otherwise, I'm very happy with them again. What with getting the new heating put in, then emptying and cleaning out the kitchen and now this, I don't think I'll be getting any more home improvements done before the spring (bathrooms, I'm looking at you). And this week I've given my exercise classes a miss as I wanted to be here on site and I'm just too tired anyway. Next week I'll be back at it though! All I want to do right now though is sleep! 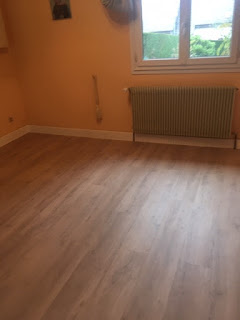 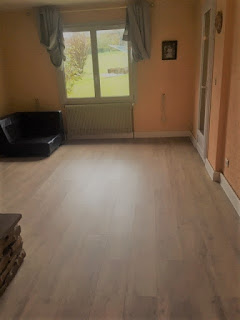 As I mentioned previously, my friend and I went down to the local "old fogies" fair in town on Sunday as we wanted to pick up the latest prospectus from GAL Voyages. Next year they are putting on quite a few trips, Norway/Denmark being of big interest, Holland in the spring (in time for the tulips), Slovenia in autumn (that's a maybe), Brittany …. plus loads of day trips. Right at the moment I haven't got the energy to start figuring out what I want to do but a couple of days of no hassle and I'll be back bouncing around like a kid on too many "E" numbers I expect!

There was another fair going on at the same time with fancy wine, cheeses and sausages (from Italy), organic stuff and the the ubiquitous salesmen trying to "invest" my pension money (sorry mate, I've just spent it all - you can stop by and see my new floor though if you like)! My friend and I just headed out of Dodge once we got to that end of the fair. But on our way back home I saw the "homeless" guy who was hassling me the other night and his "poor leg" that required that I drive him in to town and give him money looked pretty good to me - in fact I don't think I could have kept up with him if I tried. My friend said she'd seen him around quite a lot and he can be a pain, although I would say that was an understatement!

Moving on, I was saddened today to hear of the premature death of popular British chef, Gary Rhodes, at the young age of only 59. As far as I know he wasn't ill so at the moment it's a bit of a mystery what happened, but still, 59 is way too young as far as I'm concerned. I have a couple of his cook books but to me they were probably a bit too "intricate", particularly when I was working. Having a 12-hour working day/commute I just didn't have the time or the inclination to put more hours into cooking, but the few recipes I did try turned out very well. But still, very sad all the same!

And then just yesterday we heard of the death of a colleague, also 59, who died on Saturday of cancer of the liver!!! Bloody hell! He was a nice guy and a "health nut" - didn't drink or smoke, clean living, a runner, and here he is gone in just four months start to finish! I tell you, T's death hit a little too close to home. He will be missed as he genuinely was a nice guy!

And finally, on a more pleasant note, to all my US friends out there, I hope you have a happy Thanksgiving and get to enjoy being with your loved ones. I know I'm probably a grinch but as I get older I enjoy "formal" celebrations less and less and informal, spontaneous get-togethers all the more. I guess there's less pressure for everything to be perfect isn't there! But still, enjoy that turkey (yumm), pumpkin pie (berk, sorry, just can't do it), and enjoy the company of those you love!
Posted by Treaders at 15:11