Well the never-ending news headline at the moment is the ongoing story of Prince Andrew, his friendship with Jeffrey Epstein and whether or not he had sex with underage girls! Of course the story isn't exactly going to fade gently into history any time soon (nor should it be allowed to), but his car crash "reveal all" interview the other night did him no favours at all! By all accounts, not only did it do him "no favours", but showed him to be what he apparently is - an entitled, boorish, arrogant, unempathetic dick!!! His ex-wife, "the lovely Fergie", as always stands resolutely behind her ongoing meal ticket ex-husband and was, apparently, the one who told him to "go for it and get the truth out there"! Yeah, well anyone who listens to Fergie for advice on how to be media savvy probably deserves each and every flying cow pat coming their way! And this is the same Fergie who, when caught a few years back trying to flog access to Andrew for £500,000 to a fake Sheikh (undercover journalist), eventually went on "Oprah" for a "tell-all" interview which ended up about as "grueling" as being savaged by a toothless kitten! Even more of a joke was that when they finally got down to the so-called nitty gritty, Fergie then started to refer to herself in the third person - "she didn't realize what she was doing, she made a big mistake". I guess if you refer to yourself in the third person that means it wasn't really you then right????

One of the things that really jumped out at me in this whole Prince Andrew debacle though was that "mummy" apparently provides him with "pocket money" to the tune of £250,000 per year, on top of his £20,000/year military pension (and also, I imagine, on top of any money/advantages/living accommodation he receives in addition to the freebie junkets "Air Miles Andy" used to enjoy). So no shortage of money there - well not to my eyes at least, but then I guess we have different ideas of what it means to be "rich" don't we! Anyway, as I was saying, what jumped out at me was that Andrew apparently went to Epstein a few years back to ask him for money for Fergie in order to get her debts restructured! The Epstein bail out turned out to be in the amount of £15,000! That's all! £15,000!!! Now don't you think if you had your fingers in as many pies as Andrew seemingly has that you wouldn't have to go to an Epstein to beg for £15,000 for your parasitic ex-wife?? Beats me! He could have come to me - I would have been able to rustle up a little something for "poor Fergie" - you know, the one who would show up to the opening of an envelope if there was a free buffet!!! Gawd, how the other half live!

And then there was the recent brooha over a cosmetic surgery clinic trying to suggest that if you got plastic surgery chez eux you too could end up looking as fresh as Kate Middleton! The media (the Palace?) immediately jumped all over them for trying to infer that Kate had used their services but the clinic did turn out to be where Fergie had had a facelift and other "rejuvenating" treatments. Crikey, if I was managing that clinic Sarah Ferguson would be the last person I'd want advertising my clinic!

And talking of aging badly, I saw pictures of the celebrations for Monaco's national day and blimey, haven't they aged badly too! Now this isn't just me being bitchy because I'm certainly no oil painting, but these women have had access to the top stylists/make-up artists/hairdressers and so on all their lives and haven't exactly worked their fingers down to the bone in the local factory before catching the number 25 bus home have they! As they say, "fine feathers make fine birds"! But seriously, if they aren't an advert for staying out of the sun I don't know what is (although a lifetime spent smoking probably doesn't help either)!


Don't get me wrong, I'm not knocking getting older, but what shocked me was the state of their skin - the wrinkles! Maybe it's just my fat face but those wrinkles really jumped out at me. I think Princess Caroline has always been a beautiful woman (as is her daughter, Charlotte) and certainly the others have looked good (with the right help) but wow, stay out of the sun ladies. It's a killer!

And finally, there's Princess Charlene, who has to be the unhappiest looking princess I've ever seen! You know, the same Charlene who was apparently prevented from boarding a plane out of the country at Nice airport just before her wedding to Albert - that Charlene! Now I have a theory that the reason why she (and Victoria Beckham) never smile is because they have diddy little teeth that no amount of cosmetic surgery can alter. But poor Charlene's eyes just never seem to smile, and as they say, a smile that doesn't reach the eyes will never be a real smile will it! 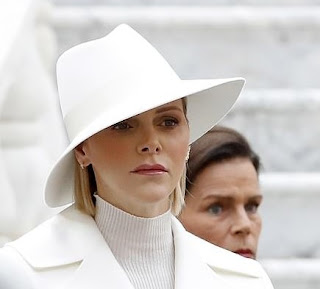