Another week has flown by!

I don't suppose it's just me, but crikey don't the weeks seem to fly by! It's Sunday night as I'm writing this and yet before I know it it seems like it'll be Sunday night again, with the rest of the week just whizzing by at a rate of knotts!

So what's been happening? I was reading an article this week on Sky News where they had followed-up on the very sad case of a young stowaway who had fallen from a plane over London earlier this year! On 30 June a flight from Nairobi was heading to Heathrow airport in London when the body of a young man fell from the plane's fuselage, narrowly missing a man lying in his back garden reading. He said there was a terrific thud and this poor young man hit the ground just a few feet away from him! They are saying that he would have been dead long before he hit the ground - I certainly hope for the poor guy's sake that that was the case! 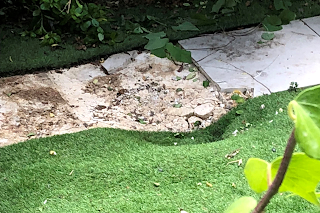 Sky wanted to find out who this young man was and what led him to take such a dangerous, and ultimately deadly, risk! Through a bit of investigative journalism they managed to identify him as a 29 year old Kenyan named Paul Manyasi who worked as a cleaner at Nairobi airport! His partner was able to identify the backpack he had with him on the day he went missing but wasn't able to say whether it was pre-planned or simply a tragic spur of the moment decision! He/they lived in a shack in a slum near the airport, earning just over £2 per day. Apparently the cleaners' contracts were routinely broken just before they accumulated six months' service thus preventing them from being given more stable contracts! Now where have we heard that before??? But looking at the abject poverty they lived in I absolutely understand the desperation that would have pushed this young man to take such a tragic decision!


Coming just shortly before the discovery of 39 Vietnamese illegals found dead in the back of a truck in England it really makes me question life's inequalities, or maybe my own complacency - who knows! What I do know is that I absolutely understand these people wanting to escape their dire circumstances, and let's face it, they must be pretty dire to take such risks don't you think! Speaking as someone who has been an immigrant for the last 40 years, albeit a legal one, I really feel for these people, and am eternally grateful to have been born with the right to have the passport that I have! Now I didn't leave England at the age of 21 looking for better material circumstances. I left because I couldn't stand the bloody weather. Just sitting at home on a grey Sunday afternoon listening to Songs of Praise droning away in the background I just knew I was getting out of there - and I did! But I was lucky enough to have the right skills, and, as I said, the right passport to be able to do so. The fact that materially my life also improved tremendously was just an added bonus, but who can even begin to imagine walking in these people's shoes? Seriously! I don't know what the solution is, and I know that countries can't just keep on accepting immigrants willy-nilly, but understand? Yep, of course I do!

In less depressing news the weather finally picked up again this week, although the snow is creeping ever closer of course. As I was running out to the bakery on Tuesday before heading off to yoga I actually pulled over to try to get a quick picture of the mountains and how pretty they were. I don't always think to pull off and take a picture but this time I managed it! 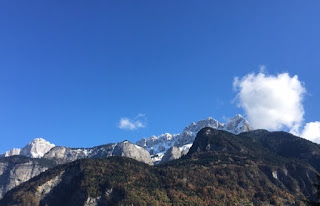 Jen told me at the beginning of the week about a fabric store called Savoie Tissus which is closing down, so I decided to take a quick trip down to Sallanches to have a look around - and came out with some lovely patchwork fabric at a pretty good discount! Fabric for regular sewing wasn't so much in evidence but for patchwork - score! And today, they held the semi-annual "Fabric Fair" in La Roche, where the sellers come down from Holland and Belgium to sell their wares. I'm not sure they were necessarily much cheaper than what we can find locally but the selection was just wonderful - although I was very restrained and only bought a couple of small items! Give me too much choice and I'm scuppered! Then my bloody microwave also managed to blow up on me (I know, more first world problems right!) but since I use it a lot I decided to run back down to Annecy and buy a cheap replacement. I don't really use my microwave for much other than reheating so I didn't need a fancy, expensive one, but again, how lucky am I that I can do these things without giving them much more than a passing thought!

And talking of spoiling myself, on Friday I went to a new (to me) place in the next village for my first facial in about five years and it was lovely! So much so that I've decided I'm going to splash out every few weeks and treat myself to some kind of treatment there - whether it be a massage (that's coming up next) or a manicure or whatever. What with Brexit still hanging over our heads I've decided I won't be going on a warm destination winter break until it's sorted so I may as well use some of the money and treat myself!

Then on Thursday I ran out to a town on Lake Geneva called Thonon-les-Bains, which is just 10 minutes from Evian, where they bottle the water. Our sewing teacher had ordered a couple of second-hand sewing machines from her contact there so I volunteered to run over and pick up two new (to us) revamped machines. (I guess it had to be me anyway since I'm the one with the signature rights to the Club's account). Patricia was telling me I would like the shop owner as he was a bit of a "Nutty Professor" type, and boy was she right. The place was jam packed with sewing machines in various states of repair and he was jumping around looking for this, looking for that, and wondering "where on earth he'd put …"! But he was a nice chap and I think we have come away with two fairly decent new machines for the club, although finding his little shop in the middle of old town Thonon was no mean feat!

And finally, on Friday I received an email from our Pension Fund Secretariat to inform me that my pension was going to be adjusted upwards by 0.1% (!!!!) as from 1 January to reflect the cost of living in Switzerland. (Since I take my pension in Swiss francs they use Switzerland as my reference and not France). Wow, I can't believe that (a) I've been retired almost a year and (b) my pension is going to go up by a massive 4.6 Swiss francs per month (that's not even $5). No wonder I'm throwing my money around with such gay abandon at the moment! But all joking aside, how lucky am I to be able to do just that!