Soft as a baby's bottom!

I just got back from my second visit to the spa in the next village and again I have to say it was a real treat. I didn't grow up having "beauty treatments" and getting my nails done because it just wasn't like that for us. We were poor and when I got my first Saturday job I had better things to spend my money on anyway, so all this "messing about" goes a bit against the grain for me personally. But in the end I just thought "stuff it", if I don't do it now then when - and in any case, there ain't no pockets in shrouds! All that to say that I am still a little uncomfortable being "pampered", although I'm sure I'll get over myself! But ladies, have you seen those disposable knickers they give you to put on, "to protect your modesty" I suspect. Oh man, those things look more like dental floss for the bum (and I'd probably get more coverage out of that). What's more, I never know whether you put the two inch triangle on the back or the one inch triangle!! Again, you can take the girl out the country but …. 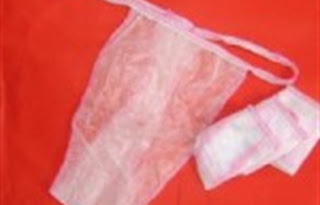 Then you have to try "hopping up" onto the bed with some kind of dignity while "the girl" holds up a large towel in front of her, ostensibly for the sake of discretion, but I reckon it's so she can have a good ol' titter behind it! Still, I made it, at which point she proceeded to rub me all over with a body scrub (felt like being sand-blasted), but I have to say she was very professional and it did feel good. After that you have to get into the shower to wash the Sahara desert out of all the weird places before she then rubs chip fat "their mystical beauty oils" all over you. Yeah, I know, I'm a pleb but I have to say my skin feels wonderful so I'm gonna keep going! This ritual humiliation, though, is made all the worse by the fact that most French women are slim and me? Not so much! So I've now decided I'm gonna give up booze at least until Christmas in a bid to try to lose some of my blubber (although since we're heading off to Italy for the day tomorrow I do wonder about my timing sometimes)! Not sure it'll work but if not, I'm still shameless enough to keep going back for more abuse! In reality, I'm sure they've seen it all before and they certainly are very professional so maybe the "humiliation" is all in my mind. Yeah, that's probably it! I do remember many years ago, though, going for my one-and-only fake tan attempt (again in the dental floss disguised as knickers). When we got to the bit where I had to hold my boobs up so she could "get underneath" I swore I'd never go back - and I never did!

But talking of "silly", I saw this joke today and it tickled me so I sent it to my friend.

Paddy and Mick are walking down the road and Paddy has a bag of doughnuts in his hand. Mick says he's starvin' so Paddy says to Mick: "If you can guess how many doughnuts are in my bag, you can have both of  'em."

With all due apolo … nah, sod that! Anyone who's ever seen Dara O'Brien will know that the Irish have the greatest sense of humour! So anyway, my friend wrote back and said that he has just been invited to an open house/drinks do and was asked to bring along "booze and nipples" as his contribution! That shouldn't be too difficult I guess!

On another note, I know I've always been naive, but I think I'm slowly "coming of age". But still, I was somewhat shocked to learn that the RNC had paid out $100,000 to buy copies of Trump Jr.'s book! Way to make it to the best-seller list I guess, but seriously? Which reminds me of the court battle a couple of years ago between the repugnant, to me, Charles Saatchi and his then wife (I think they were still married at the time), the lovely Nigella. The court case had to do with alleged theft by two of their employees, but the trial was quite an eye opener. One of the "highlights" of the case was when a "private" text message between the two of them - in which he referred to her as "High-gella" - oops - and the fact that she had once taken cocaine when her first husband was dying - "accidentally" became public knowledge. Assuming that was indeed a private text message and it was never in her best interests to have it become public knowledge, it makes one wonder who on earth could possibly have leaked it! What came out of that trial for me, though, was that (a) Nigella wasn't exactly the desperately busy single mother dashing home from a hard day's work to effortlessly put together a dinner party for 30, but also that (b) she came over as a very generous and likeable person - quite the opposite of Saatchi! What also came out during that trial, though, was that after his book was published, his two assistants were sent around London in a taxi to buy up all copies of his "best-selling" book! Well colour me gullible but I never realized that happened! And talking of "gullible", someone once told me that the Oxford English Dictionary had decided to delete the word "gullible" from its latest edition because of lack of use! Can you imagine that!

And finally, somewhere in all my travails I seem to have lost one of my lovely wooly slippers. There just might be a suspicious looking "bump" under the new tiling by the front door, but I do hope somebody didn't do a "Jimmy Hoffa" on it!
Posted by Treaders at 16:53