Well I don't know where last week went, it feels like I went to bed and before I knew it another week had flown by! It seems it's true what they say about retirement - you don't see the time whizzing by, but as long as it's pleasurably whizzing by I guess I can't complain can I!

So what's new? Well last Saturday's rugby was just fabulous. England versus New Zealand! Of course I was desperately hoping England would win but with NZ being the favourites I sure bit my way through a few nails, I can tell ya! But England played wonderfully and NZ - well it just wasn't their day. I was ecstatic about England's win (obviously) and only hope they can repeat that performance tomorrow in the final against South Africa!!!! 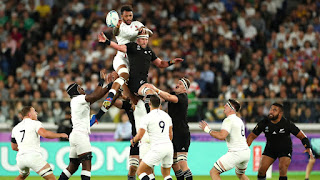 Then on Saturday evening we had our latest board game evening at my place. Jen suggested we do a "halloween"-themed evening so that's what we did - and it turned out great! I noticed that Jordan looked very tired but he said he had been helping another friend build his house in the morning, band practice in the afternoon and then my place in the evening!! I guess ya gotta be young right? But at least he is learning more and more skills for the day when, hopefully, they will either build or renovate their own place!

There were only 10 of this time as a few couldn't make it but it was still a great evening all the same!

Halloween itself was fairly quiet, but then it isn't as big here as it is in the US or the UK anyway, even if it is catching on! I made a last minute appointment in town to get my hair cut before I did my usual hack job on it and the kids were parading round the shops and, mostly, the shopkeepers played along and handed out the candies, although from what I heard from my hairdresser not all the local businesses are interested in this "new", commercialized celebration. I understand to a point as traditionally it is carnaval that's celebrated in Europe in February but that seems to have gone by the way in many places, and some don't feel the need for an "imported" celebration. Still, money talks doesn't it and the shops are certainly not going to pass up the chance of making a few €€€€€€! I got a few visitors when I got home as I decorate my home anyway, but being out of town we really don't get that many trick-or-treaters. I tend to live on the first floor of my house as that's where my TV room and computer are, so I figured I would do some sewing (in the dining room) waiting for the doorbell to ring rather than running up and down stairs all evening. I also took the opportunity to make "bottom of the fridge" soup for today so my time was put to good use!

In the meantime, my gardener showed up to cut my lawn one last time (I wasn't really expecting him again this season, but he comes as and when) so I asked him to cut my hedges and chop down my dying cherry tree while he was at it. And by golly he made quick work of both! My neighbours, who also use him, got in a bit of a huff the other week and started cutting their side of the hedge (they have absolutely massacred it) but I thought (a) I'd get around to it at some point - admittedly not very likely, or (b) I'd get him to do it next year, but in the end it got done by him at a very reasonable price and looks a darn sight better than their side! The husband on that side is a strange guy, ok with me, but very domineering and very jealous by all accounts (so read "slightly nuts"). As an example, she was in the habit of cleaning their bedrooms and changing their sheets on a Tuesday morning and he got it in his head it was because she "used to see her lover on a Monday"! At one point he also thought she was having an affair with my husband (she wasn't, but she would have been welcome to him all the same), and with my other neighbour (again, not true). She says she can't go anywhere without him, particularly now that he's retired - not even for a coffee with her friends! Man that would drive me nuts! And I could see that he decided to cut their hedges in a fit of pique (rather than wait for the gardener to show up) and that meant that she had to be out there with him and to hell with what else she had planned for that day! In the end, as I say, he made a real pig's ear out of it and it looks terrible! Did I ever say how happy I am to be single? Yes? Oh well then I guess I don't need to repeat myself - but I will anyway, just because it's music to my ears - man, I'm so, so, so very glad to be single!

And finally, I had my twice-yearly medical check-up in central Geneva today and the bloody roads are even worse than I remember them! Geneva is all dug up as the French and Swiss are working togther to put in extended tram lines to link up with the new cross-border trains which will, hopefully, ease the traffic situation in the city. But in the meantime, it is hell! I tell ya, if I didn't know Geneva like the back of my hand I probably wouldn't even be home by now, what with road closures, new one-way streets and never-ending roadworks! Again, I'm so glad that I no longer have to do that trip every day! But get this ladies, how would you feel having your legs up in the stirrups, with the gynae waving his medieval instrument of torture around and then asking you how you feel about Brexit!!! Seriously???? I was tempted to say "right now it feels like I'm getting f**d over twice" but thought the better of it, so just said I was against it! But heck, sometimes it makes you wonder about the definition of "small talk" doesn't it!