I had meant to write about this previously but then I end up going off on a tangent and I should know by now where that leads me! Nowhere fast! But I wanted to comment on the fact that both abortion and gay marriage were legalised in Northern Ireland on 22 October! I am pro both, although feel very strongly, obviously, that abortion should never be considered an alternative to contraception. I had heard about this legislation rumbling its way though the corridors of power in NI but never fully understood what had happened until now. It was easier for me to take the text from France24 news rather than type it all out, so here's what happened.

So on 22 October both became legal, along the same lines as the rest of the UK, and I'm delighted! Abortion, in particular, is a very divisive issue and I understand people's rejection of it, but rich women have always been able to have access to abortion anyway, while poorer women have always had to deal with the consequences of unwanted pregnancies! I remember watching a very moving episode of "Call the Midwife" once on this very issue. The series is set in the poorer areas of London in the 1960s. One family had five kids (I think) and were living in one room, unable to even adequately feed the children they already had. The wife got pregnant again and in desperation went to a back street abortionist as both she and her husband knew they couldn't cope with any more children. The problem was the abortion failed and so a few weeks later, in desperation, she tried again - with almost fatal consequences. In fact, in the programme, they lead you to believe that she did, indeed, die, only for you to find out later that she survived and the family moved out of London and its grinding poverty. It was a lovely programme because the nun-midwives at Novartis House were obviously completely against abortion, but understood exactly what grinding poverty and too many mouths to feed was doing to these people. I know people will say that in this day and age there shouldn't be unwanted pregnancies but contraception can and does fail, rape and incest happen, unviable babies are conceived and the life of the pregnant mother is sometimes in jeopardy so, while wishing there were never a need for it, I am absolutely pro early abortion. The fact that gay marriage also became legal was totally overshadowed by the abortion issue though, which was quite sobering to be honest, but I am so happy that this piece of legislation has finally gone through! 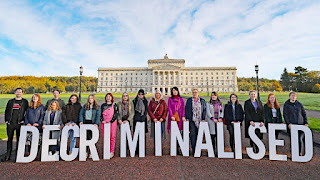 In other news, I decided that I wasn't going to go shopping this week because I have so much food in the house that it's just a nonsense to keep shopping every week just because. So I didn't hit the supermarkets and it's amazing how much food I have in store when I really get down to looking at it all! I did run into the next village of St. Pierre on Saturday because I wanted to pick up some stamps so I stopped at their Saturday morning market and bought some fruit and eggs, but other than that I don't actually need anything! So a win-win situation there then!

Tomorrow being Armistice Day it's a holiday in France, although I suspect not everything will be closed. Jordan and Jen are both off so they are coming over for a couple of hours. I asked Jordan to bring his tools because the radiator in my bedroom isn't working and I suspect it just needs purging, but I know he will take care of it pretty easily. In any case, I have let Max know, but if Jordan can get it sorted so much the better!

I'm still moving stuff out of my living room either upstairs or into the basement. This weekend I moved a couple of my outdoor plants/bushes into the garage to protect them from the frost before I get the chance to "bubble wrap" them for the winter! It's just as well actually because we have snow at 1,000 metres already and since I live at 800 metres it won't be long before we start getting hammered I suspect. It's already on the mountains at the back of my house, and very pretty it is too - I just wish it would stay there! I follow the "Département de la Haute Savoie" information site on FB (this region is called Haute Savoie) and they posted today that getting snow at the lower altitudes this early has given a very welcome boost to Christmas ski bookings already! I'm glad because when the resorts don't get the snow they lose thousands!

Other than that, I really haven't done much this weekend. I finally got a baby quilt I started ages ago almost finished and I'm very pleased with the (almost) end product. But, seeing how many hours I have put into it already, I can understand why it might be impossible to put an honest price on some patchwork creations if you took into account the hours of work that go into them, as opposed to those creations that are made as a labour of love - which this one is. I'll show it to you when it's totally finished though!

And finally, I see a few bloggers have been "hit" by some vile troll who seems to be doing the rounds lately. Well if it is some guy banging on about how well he "got his knob polished" in 1985, it seems he has found his way to my blog too. Not to worry though, I just hit delete, and he can keep polishing his knob to his heart's content - probably in his mommy's basement I suspect!