The other day I finally realized that I couldn't think of a single good excuse to put off painting the kitchen any more so decided there was nothing for it but to just get on and do it. Now I don't mind the idea of painting as such but I absolutely hate having to move everything so that I can get into all the nooks and crannies. I tell ya, the temptation to just paint round that bottle of ketchup where it stood was extremely strong, but then that would mean I would have to keep buying the same brand for ever and a day. So in the end there was nothing for it but to just move stuff and get started. I've never been one to work all day like a navvy and get it all done in one go. I've always done a bit here and there and quit when I get fed up of it. My ex used to go nuts as he wanted everything over and done in one fell swoop but then when it was finished he would toddle off to sit in front of the TV while I still had to clean up and make dinner and so on, so now I always stop before I get to the point of being knackered. Anyway I started out painting the ceiling, then one of the walls the next day and so on. To be honest I did such a cack-handed job the first day it felt more like flinging paint at myself and hoping some of it would stick to the walls, but each day I've done a little more and tried not to make so much mess as it just means more cleaning up. I'm not totally sure of the colour though. I had wanted just plain white but this seems to have somewhat of a bluish-greyish tinge to it which looks a bit cold so I'm wondering what exactly the colour "blanc bec" really is in paint terms. Whatever, it's up there now and it's not going anywhere so I'll have to jazz it up a bit if I think it looks too cold. I realized pretty quickly that I don't like using a roller so went to the DIY store and bought a new paintbrush, but would you believe there were hardly any in stock!!! I guess everyone is using lock down to get some DIY done because the shelves were pretty bare. Then despite what it would seem to indicate on the paint pot, I realized last night that I might not have enough to get it all done, so today I played the daring young thing and drove into town for the second time in a week to get another pot of paint. And miracle of miracles they had the exact paint I needed - I got the last pot. Crikey, can you imagine if they didn't have any and I ended up left with one odd coloured wall!

Anyway since I was in town I decided to stop in at the health food shop again as my friend told me she had bought cottage cheese there the other day. Now cottage cheese is not exactly the in thing in France and most people have never heard of it, so it's not easy to find. But I got a couple of tubs of that and a bottle of kombucha and lo and behold, as I went to pay I saw that they were selling hand sanitizer at the cash register, so I got a bottle of that too. You know, I'm beginning to think that if I decided to have another shot at internet dating, just mentioning the fact that I can wield a paintbrush and have a bottle of hand sanitizer I think my stock would trade high, don't you!

As I drove out I looked at the price of petrol and man has it dropped - so far this lock down I reckon I'm getting six weeks to the gallon and counting. So tomorrow I'll go and check my heating fuel and get that ordered while they're virtually giving it away. Every little helps doesn't it. Then I got an email from the tax people to say that "your tax statement is online" and when I checked it it looks like my tax guy has already set up the automatic deduction with my calculations being bang on. I'm so pleased because as I've said before when you've given up a good job based on a set of calculations it would come as a helluva shock to find out you'd totally screwed up and were basically now broke. Phew!

I was watching TV the other night while still trying to get on with my jigsaw puzzle (never again) and I see that they've got a new series of Kirstie Allsopp's crafting programmes on, specifically designed around lock down I guess. I like Kirstie as she's very tongue-in-cheek, but you know how every Christmas you're going to have a totally "hand-crafted Christmas" and it never works out that way - well that's how I feel about this stuff. She's entertaining anyway, even if I never do get round to doing a complete découpage project using an old map of France for the design, although that has actually given me a couple of ideas, truth be told!

And finally, today is the 100th birthday of the amazing Captain Tom and the country celebrated with him. At last count his fund has raised over £31 million for the NHS and he has received 150,000 birthday cards from around the world. An eagle-eyed boffin at the Ministry of Defence noticed that he was missing a WWII medal that he was entitled to so they made a special presentation of that medal to him this morning, along with a beautiful cake, a message from the Queen and news that he has been made an honorary Colonel! But the icing on the cake was when the RAF did a fly past of a WWII hurricane and spitfire over his home! Absolutely stunning. I think in difficult times it's lovely for people to get behind a figurehead and he seems to have fulfilled that role. But more importantly, he seems such a humble and decent man and when, at the end of the interview he simply said "it'll be all right again soon you know, it always is", it was just so so special and heartwarming. Warms the cockles of your heart doesn't it! 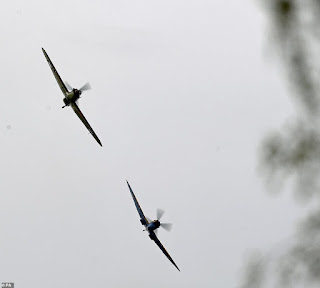 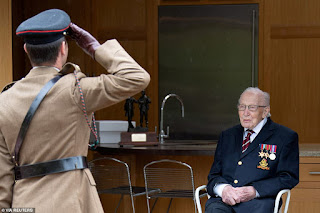 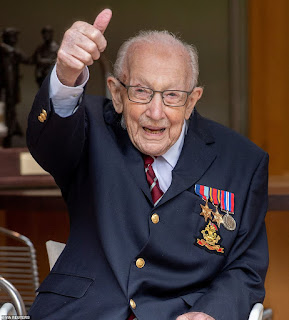