Catching up with friends!

Pre-pandemic, a group of us former colleagues used to get together on a Wednesday evening opposite work for a drink. Maybe six or seven of us if we were all there. Anyway last Wednesday P set up a zoom meeting for a virtual drink and chinwag and it was nice to chat with everyone again after so long and catch up. One friend's daughter had her second baby a week ago in California and her mom would have been out there with her to help out if circumstances had permitted. Another's daughter is working as a doctor in London during the pandemic, while another's daughter is teaching young children in Kenya - remotely at the moment I would imagine. My son helped organize a meeting with 700 participants all done through zoom - quite the achievement when you consider these people would normally be flying in to Geneva from all over the world. I found out that at last count there were 50 cases of infection at work, I believe, although thankfully none serious as yet. It's a strange old world we live in isn't it, when some are doing so much and then others (the likes of me) have to sit and wait it out, just pottering and trying to keep busy/sane!

And then you've got the cases of people dying who "shouldn't" be dying - young, apparently healthy people, and older people who supposedly have no resistance making it out the other side, like the 99 year old WWII veteran in the UK this week. He will be 100 in July and I hope they have a huge party for him to celebrate. The gent below is 92 (I think) but isn't it gratifying to see the doctors and nurses celebrating their every victory. 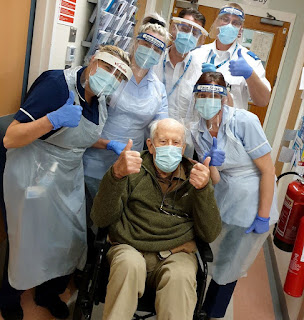 I went to my regular store for shopping this week as I can't get everything I need in the "Fresh" store. People were very restrained, some wearing masks and others not, but at least the store provided disinfectant for you to wipe your cart down at the entrance, although I'd already done mine in the parking lot. There was the guy I now recognize as "prowler", who wanders up and down the aisles at speed, going completely against the normal flow of traffic and constantly yelling into his phone - unless he is actually remote controlled and that's the only way his wife can get her shopping done. I had to laugh though as I did see a couple of people wearing coffee filter masks, but hey, why not! Then there was the cop that my kids always used to call Robocop out and about in town trying for all the world to look like Schwarzenegger. I always thought he was a bit weird, all muscles, crew cut and swagger - and then my kids told me he is actually a municipal cop who only directs traffic and is, I suppose, now on the prowl to hand out fines for people without the appropriate paperwork. I don't know how they know him (do I wanna know?) but they don't like him, which is weird because they apparently also know his wife and said she's as nice as he is unpleasant!

They actually had disposable plastic gloves at the store but when I saw that they were asking €10.50 for a box of 100 I put them back, because I was pretty sure I had a box at home, if I could just find them. Well anyway I did find them, and while my packet is probably a couple of years old they actually cost 1.30 Swiss francs for 100!!!! Can you believe that! The dollar, the Swiss franc and the euro are all pretty much on par at the moment and the store wanted over €10 for the same thing I bought not so very long ago for SF 1.30!!!!

In other news, I'm still keeping track of my walking although with the lockdown it's no longer "boots on" (intentional walking) but just keeping track of my daily steps with my pedometre. In a fit of pique I decided to cut the grass again today, but without bagging it this time as it just gets too heavy. In any case I have nowhere to dump the grass with the tip being closed right now, but not bagging made it so much easier. Anyway I actually clocked up six miles today just "puttering", so I'm quite pleased with that, and it takes my yearly total up to 340 miles so far. When I decided to take my rubbish up to the collective bins a bit later, a distance of about 100 metres, it ended up taking me about 30 minutes as I got stopped by three different sets of neighbours for a chat! I was asking one neighbour how her husband was finding it working from home (I used to see him regularly on my commute) and I was a bit surprised when she said how much he hated it! She said he was so used to being on the move and always got a lot of exercise in in his down time that he was now climbing the walls! Add to that, she, like me, believes that when this lockdown is eased a little we will still have to wear masks if we leave our homes and she was complaining that she couldn't find them anywhere. When I told her I'd been making a few and would gladly make washable masks for her and her family you'd have thought I'd just given her a winning lottery ticket! I reckon I'll have them done by tomorrow, although my first attempt today was my usual botch job somehow (cut it out wrong again) so I'm now looking for a kid with a pin-sized head and huge ears to palm it off on!

A couple of the local garden centres are being allowed to open up as of next week "as long as they have been open throughout the lockdown by virtue of the fact that they also sell primary necessities"! So the big store that I particularly like will be open as from Tuesday because they also have an organic shop on site. Not that I'll be able to go there though as it is not local to me and I would get clobbered if I got caught out that way. I think there is one in town that is now open because they also sell a few bottles of olive oil and honey and so on, but it seems kinda unfair to me that the one in the next village is not allowed to open because they only sell plants. I really feel for some of these people who have put so much into their businesses and now cannot sell to the public! If they're still around when this thing ends I'll make sure to support them as much as possible!

Other than that there's not much new here obviously. Doing some sewing this afternoon set off my "trigger finger" and I ended up lopping about two inches of hair off the top of my head, but since I do that on a regular basis I'm glad to have an excuse this time. And finally last night I wasn't particularly tired so when I saw that Absolutely Fabulous - The Movie was on I thought I would stay up and watch it. Well, that's 90 minutes of my life I'll never get back! Talk about a load of rubbish. But you know, I kinda like some of the stuff Jennifer Saunders and Joanna Lumley have done in the series before. It's totally over the top but some of it tickled me. And I have to admit that however unbelievable the so-called plot was, I think I've got a bit of a girl crush on Joanna Lumley (I've always liked her anyway), particularly when she was "disguised" as a man in order to get the world's richest woman to marry her. She makes a fine looking man as far as I'm concerned, although would that be justification for staying up so late and watching the movie again? Nah, never in a million years!