Where's St. George when you need him?

The last couple of days have been slightly more productive for me, as I was just getting tired of all the things I could/should do and not doing them. But I was thinking about it today and maybe there's nothing wrong if this becomes my new normal. For the most part I don't have to dance to anyone else's tune any more and while I enjoy my courses BC (before coronavirus) I'm doing just fine without them, too. In the six weeks we've been in lockdown I haven't gone out walking even once, only because I can't be arsed to figure out an exact one kilometre circuit near my house (there probably isn't one) and I was afraid of getting a fine 1,100 metres from my front door from some jobsworth having a bad day. So the highlight of my week every week has been grocery shopping - well that and taking the bin out twice! I went shopping on Thursday and was stopped for the first time by the police asking for my attestation and they were very polite, so maybe my "jobsworth" comment is unfair! There were no lines at the supermarket and while the shelves were only about three-quarters full I got everything I wanted. The good news, apparently, is that La Roche's outdoor market is going to slowly start up again, with maybe five or six stands being allowed to set-up out of the usual 40 or so, although how they figure out which stallholders are allowed to sell and when I have no idea!

In other news, I saw on British TV the other day an interview with an American team in New York which had produced one of two studies on the death rates for CO19. It's early days yet of course but they had looked at statistics for over 5,000 deaths in hospital and studied the aggravating factors. I'm not phrasing this very well but basically both studies were coming to the conclusion that age and obesity seemed to be the two most aggravating factors linked to death. Now I would have thought compromised lung function, heart problems etc. were bigger issues than obesity but while they were indeed factors, obesity seemed to be a bigger factor! Then they interviewed a British researcher doing the same kind of study in London and he confirmed that their findings, so far, were agreeing with the statistics coming out of the UK! Wow!

A few years ago I started having an annual check-up with a dermatologist due to a "weird thingy" on my leg when I came back from St. Lucia. It turned out to be nothing but he did remove a couple of other "weird thingies" as they were suspicious and advised me to get checked out every year because of my pale skin. Well Dr. Twinkly Eyes went into semi-retirement, giving up his surgery and moving to a large clinic in Geneva on a part-time basis. I was looking to book an appointment with him recently, but obviously that wasn't possible - until yesterday when I got an email from the clinic to say that as from Monday the clinic would be open for business, "including for cosmetic procedures"! I was stunned. I knew they did cosmetic surgery but I was stunned that they would be opening up for such selective procedures at this time! When I mentioned this to my friend he said he agreed but people/businesses were in dire straits and people didn't know how best to handle it. I'll be darned if I know the answer, but given the two studies mentioned above I wonder how much a bit of liposuction would cost?

Anyway, back to lesser things, today has been really productive because I decided I wanted to knock a few things off my to do list. I spent over an hour getting online bills paid and sorting out paperwork etc. Then I received a posting from Un Jardin au Paradis (A Garden in Paradise), which is an organic farm near here where I wanted to do a one-day course on sustainable agriculture (which I will definitely book as soon as I can). Anyway, they sent me an article on "cardboard potato growing" and I was intrigued. Now I know you can plonk cardboard down over grass/weeds and a few weeks later, hey presto, half the grass/weeds are gone. The way they grow potatoes, you plonk down the cardboard (on top of my grass in my case), layer it up with grass clippings, cut an "X" into the cardboard, poke your sprouting potatoes through it, re-cover with more clippings and wait for a miracle. So I did it - well my form of it. I have to admit I'm pretty slapdash so I will be quite surprised if it works for me (remember my home-made kombucha experiment), but we can only try these things right! 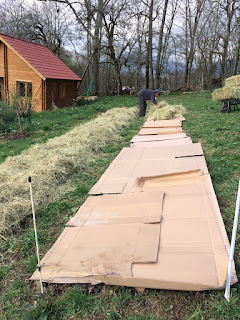 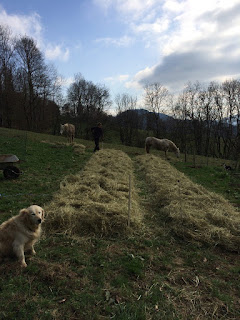 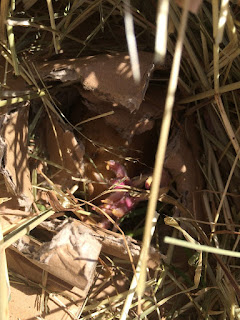 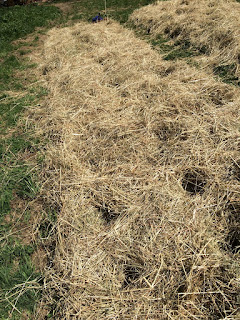 After that I did some more gardening, took a shower and decided I needed give myself a second "lockdown haircut". At this point I'm working on top of my previous lockdown haircut, so while I tried to make it as even as I could on both sides, I have no idea what it looks like at the back. Then again, I don't really care what impression I make on people as I'm leaving anyway!

Then I decided I wanted to try a new recipe so as I had a few apples hanging around I made The Hairy Bikers Spiced Apple Cake. Now I'm very picky about cakes and while it was ok I wouldn't rave about it. Just as I was pulling it out of the oven my other neighbours walked over with a jar of homemade orange jam, and then my favourite neighbours wandered over so we all had a distanced coffee and a good chat. Both the ladies were saying that they were having a tough time, with Mrs. S saying that she thought she was heading into a depression, and my favourite neighbour saying that she had spoken to her mom and then spent the afternoon crying! Crikey, they are both lovely ladies and I felt so bad for them but what can you do in a situation like that except be there to listen? Anyway, after they left I had time to make a couple more masks while the cake was cooling and then took cake over to Mrs. S and to the other neighbours. Her husband was in the garden and when I saw that she wasn't in the kitchen I just left it on her table. Well about 30 minutes later I was in the garden reading when all of a sudden I heard her in the garden saying "oh my God, I think I'm going to be sick"!!! Say what???? About 10 minutes later she came over to thank me for the cake so I told her to just throw it if she hated it. She said "no, I came over to get the recipe", and when I explained to her that I thought I had almost poisoned her she burst out laughing and said she was reading an absolutely gripping, but horrifying book on WWI and that was what made her feel sick. So I guess I cheered her up at least!

Right now I'm actually watching Philadelphia Story for the first time, can you believe, and am loving it, but I couldn't close without saying that today is St. George's Day. In 1350 he was chosen by King Edward III to be the Patron Saint of England because "he was admired for his bravery in the face of terrible suffering". So while I guess he may not have actually slayed a dragon planet earth could sure use some help right now if he's listening! 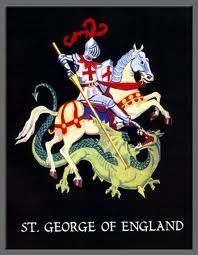