There's not much going on here at the OK Corral - like most places I guess, but I'm still doing ok, thank goodness. I couldn't sleep the other night for some reason so got back up again around 12.30 to finish reading a book that had been recommended by a friend. It was called I Know Who You Are and was pretty good, with lots of twists and turns, an easy read, but quite a sting in the tail involving the bad guy getting killed with a pickaxe (don't want to give too much away there right)! After I'd finished it I did manage to drop off but as I'm wont to do on occasion, I had another weird dream. Apparently Prince William had just found out that Kate had been cheating on him and announced that he intended to divorce her. For some even weirder reason I was working there (????) and after a distraught Kate stormed off I went into the study and found an ax (she obviously intended to murder him with it) so the only way I could prevent that was to hide the ax behind the fax machine. I know, I know, I get it's weird to be dreaming about Wills and Kate. The bit about the ax you can probably see where I got that from, but a fax machine????? They went out with wind-up telephones. I used to tell my colleague about my weird dreams and he would "psychoanalyse" me until we roared laughing, but this one really got me stumped - a fax machine? How long ago did they fall off the face of the earth!

At the beginning of the week I had a phone call from the young men who I signed with to get my roof renovated - Technitoit - and they asked if they could come over to finalize some papers and talk about the insulation project that I had also asked them to look into. When they arrived we sat out in the back garden and they commented how lovely my garden is. Not my unmown grass bit, but the beautiful view I guess, so I said I thought there would be a lot of lovely gardens this year, what with people having more time because of the lockdown. They were telling me though that having been off one month it was starting to hurt financially. In fact the one guy was very open and said that he had only picked up €1,000 last month in unemployment and with €800 of basic monthly bills it really hurt so they were more than glad to get back to work. Another thing they mentioned was that quite a few of their clients had had to cancel because many were frontaliers working in Switzerland and when the Swiss started cutting back on staff it was obviously the frontaliers who were the first to be let go! I hadn't thought of it that way and it really brought home to me what a precarious situation so many were now in. Anyway, they were up on my roof taking pictures and, not surprisingly, my insulation is shot to pieces. Well it's 40 years old so probably about as effective as a paper hankie at this point, so I signed up to get it all done - the cleaning and sealing probably starting next week and then 27 cm of new insulation all over, probably in October. It's a lot of money but becoming a necessity. So I was thinking, what with the floor, heating and water heater all done, the roof in the pipelines, as soon as I get the bathrooms done I think I'm good to go. Hopefully the rest will just be cosmetic, as and when. My neighbour did mention that they were having AC put in a couple of rooms as the summers are becoming unbearable here, so I may think about that too. I'll wait to speak to the guy that does theirs before I tackle that one, although I suspect in any case it's already too late for this year!

In other news I continue to potter around getting things done here as the weather is still lovely. The really weird thing, though, is that I am consistently getting over 10,000 steps a day despite the fact that I never go out walking! I'm making a conscious effort to sort the basement and in and out the garden all the time but I was really surprised at how much I'm now moving as compared to previously. Long may it last, but I suspect it will slow down when the really hot weather gets here as I hate it!

I ended up with both neighbours having a coffee in my back yard again today, which is nice as it gives us a chance to have a chat and them a chance to speak to someone other than their husbands. I was saying to D how much I loved the poppies in her garden and she offered me a root, which I gladly accepted. So then she goes on to say that she offered a root to her other neighbours, the M family, and he refused "because they make opium out of poppies"!! Say what! Now the M family are Jehovah's Witnesses, and while I am not the slightest bit interested in their religion they are very, very nice people. In fact it's their arthritic old dog that dodders down to my back garden for a crap most days but I don't say anything - just shit shovel - because, as I say, they are elderly (80 and 86) and they have been good to me. But even I was surprised at his response to the offer of a poppy root. I think my mouth must have dropped open because D then went on to say that years ago their 14 year old son had been killed when he climbed on a bunch of pallets, which then collapsed and crushed him (this I already knew). But when they got to the hospital the mother ran in and said "no transfusions" and the doctors, apparently, couldn't hide their disgust. Their son was dead on arrival sadly but to rush in to an emergency room and insist on that is more than I could do, religion or no religion. Each to his own I know, but nope, I'd be lining up with my sleeve rolled up!

I also finally managed to get my "pixie door" put up today. I screwed that thing into my plum tree and while it might just kill it, I think it looks rather pretty! 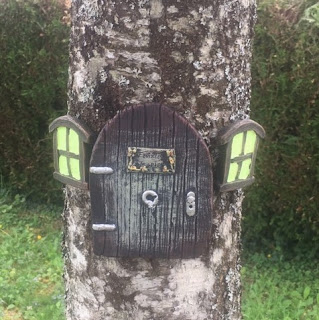 In other news I see that the UK has started clinical trials of a potential vaccine on healthy adults this week. Fingers crossed. And Captain Tom, whose 100th birthday is on 30 April, has apparently received over 40,000 birthday cards already, so much so that the Royal Mail is having to set up a special room just to cope with it.

John over at Going Gently posted a picture of beautiful Conwy castle all lit up the other day and I wanted to repost it here as I have such fond memories of the place. My brother lived about half a mile behind the castle (on Castle View Estate) and my aunt lived about 300 metres down the road, on Castle Street (they're not very imaginative with street names as you can tell). I have such lovely memories of the place where I spent so many summers that I just wanted to have a keepsake here on this blog.

I think everything that can be said has been said about the Donald's suggestion to think about taking bleach internally hasn't it, but the one positive side effect seems to have been that his self-aggrandizing daily briefings have now been cut short and he's taking no questions from reporters, so that's a plus. I'm just wondering how long it will be before they announce that some idiot gave it a try though as, sadly, while that seems so unthinkable I honestly believe someone will do it!

And finally, Kylie over at Eclectica had been asked by another blogger about "weird" things in your house that you don't even notice. Well I no longer have it in my house but when I was married I used to like to read in bed. My bedside lamp was fine but the one on my husband's side was way too bright, so one night I asked him if he could do something about it - thinking maybe he'd change the light bulb. But nooooo his solution (always the path of least resistance) was to take a pair of underpants out of his drawer and pull them down over the lamp shade. That bloody thing looked like a white faced alien for so long, the "eyes" being where the leg holes were. To be honest I was so beaten down that his bedside lamp/underpants were the last thing on my mind and I never noticed them. But about a year after he had moved out (taking the bed with him - I guess the girlfriend liked it), I was going to get the floor redone before buying a new bedroom suite. Well my neighbour came round to help me take the carpet up and said "Anna, don't you think it's time for the underpants to go?" and then we just roared laughing. It's kinda embarrassing to have your neighbour draw it to your attention though isn't it!