Day 21 and things are still plodding along, as they are wont to do in lockdown I suppose. We received a notification from the retirees' association of another retiree death, but as this lady was 100 years old and one day, I doubt very much that covid19 had much to do with her passing. She was a right old tartar from what I can remember, so maybe that's how she came to last quite so long! And then I see dear Boris is now in intensive care. While I don't particularly care for the man as I feel he's basically just so much hot air, I hope he gets better quickly - and of course if he does he'll be bloody unstoppable. I must admit when they had the "applause for the NHS" last Thursday night he didn't look well at all so I guess things went downhill very quickly for him. But I do genuinely hope he gets through this!

I see in related news that certain European countries are starting to think about relaxing the lockdown - specifically Denmark, Austria and the Czech Republic at the moment. I doubt France will be among them any time soon though as by all accounts we haven't hit the peak yet. A common feature of any relaxation of the rules seems to be compulsory wearing of a mask at all times when out in public. I was talking to my neighbour about this and she said she is panicking a little as they don't have any masks (neither do I but I'm not so worried about it). She, however, smoked for I would guess getting on for nearly 50 years (she's 67) until she gave up 15 months ago after hospitalization for severe pneumonia in January last year. Her husband still smokes and one of her grandchildren has Downs Syndrome and is medically fragile, so she was saying how they will need to be very careful when they are allowed out and about and she would need to get hold of masks pretty fast. So I went on Youtube and found what turned out to be a very simple tutorial on how to make your own masks. They recommend three thicknesses of material so I messed around with some of the fabrics that I have, including putting patchwork wadding in. The first mask I used thicker fabric throughout but it was very difficult to sew. The one with the wadding in was also a bit tough to sew, so I think I will stick with the three layers of close-weave cotton - also the easiest to sew. As I say, I have tons of fabric anyway and they were pretty easy to complete in about 15 minutes. My only problem was finding elastic for the sides but then I stumbled upon an old stash and off I went. The first three prototypes I gave to my neighbour (along with a bunch of fabric and wadding) and I've since made three more in case we do, indeed, have to wear them all the time when we are released from purgatory. I took a picture of all the different versions I'd made but when I realized they looked like a bunch of 1960s sanitary towels I thought "nah, maybe not"!


Other than that I've been pottering around getting things done and quite enjoying myself. I've taped up the walls ready for washing and painting the kitchen this week, been potting up some seeds in preparation for planting outside in May and trying to get 30 minutes yoga in every day, although I don't always succeed. My bloody 1,000 jigsaw puzzle is driving me slightly nuts though as it is slow going! Honestly, at this rate I reckon I'll be 76 and three-quarters by the time I get it completed. I also signed up as a local government volunteer and while at the moment there doesn't seem to be anything local enough for me, I'm sure something will come up.

Other than that, the weather is beautiful - shorts and T-shirt weather during the day - so I make sure to spend at least an hour outside reading each day. What has struck me though is that with the relative silence that now envelops our little village I'm so much more aware of the chirping of the birds and the buzzing of the bees in this our new normal. As I was sitting on the back terrace the other night I looked up at the late afternoon sun on the mountains and managed to snap a fairly decent couple of shots of birds on the bird feeders with my phone. I was thinking the other day that yes I still have a lot of travelling left in my blood when this is all over, but until then I'm just so content to be where I am and happy with my lot! 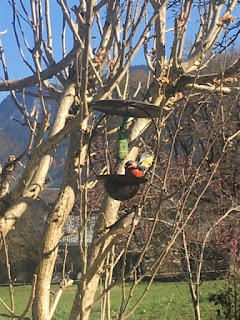 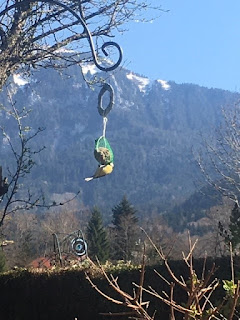