Lockdown day 20 looks pretty much like every other day in lockdown so far, except for the exciting bit where I get to chose the day I go grocery shopping. I like to change it up a bit so sometimes I go on a Thursday and other times on a Friday - you know, just to keep things real!! Anyway this week I went on Friday and timed it to leave home about noon because I knew there would be hardly anyone at the shops. One thing that still holds true is if you want to invade France you do it at lunchtime! And again things really aren't bad at all, I got everything I wanted and people are still very much respecting the social distancing, probably because the police are out and about and the fines will hurt! That being said, quite a few people have masks on (the store provides plastic gloves) but I don't have one - unless I can find the one I bought ages ago when I intended to paint the kitchen (before my new floor was laid - remember those lofty aims)? Failing that when I "inherited" all my ex-husband's stuff when I ended up emptying his rental after his move back to the States, I did find an unopened pack of Fruit of the Loom undies so I'm wondering if I can just put a pair of those over my head and brazen it out! I did think about taking a photo and sending it to my kids but then thought the better of it because with social media nowadays who knows where that photo could end up!

In Sweden they have still not gone into lockdown and are relying on people's common sense (which may or may not be all that common) to do the right thing and not behave like idiots. So bars, restaurants, schools and so on are still open, with their chief epidemiologist stating that they believe relying on "herd immunity" is the only way to beat this thing. He then went on to criticize the UK's handling of the crisis because they "switched tracks" mid-way though, starting off going with the "herd immunity" plan and then switching to lockdown. In his opinion the UK were going to get the worst of all worlds by doing that. I think he might be right actually but either way I guess someone will be proved right and someone will come up short, but only time will tell which is which!

A friend set up a zoom chat between a few of us retired colleagues on Friday and it was pretty nice, although my computer did keep freezing quite a bit. Either way it was nice to chat with them all. Then Jordan sent me a video of their cat on their lovely balcony (a godsend for them at the moment) being taunted by the birds. He told me that as from tomorrow he is on chômage technique, which is basically being laid off because of the pandemic even though they've got tons of work. They've done all the outside work they can do so they have to lay him off until lockdown is lifted. He told me he should still get 80% of his salary though, so that's a relief. I didn't say anything but in the UK people have to have been on board with the company on 28 February in order to qualify for this kind of payment and that's exactly when Jordan switched jobs. Apparently that doesn't apply in France so I'm relieved for them, although I can always help out if they are hurting. I told him now would be a good time to learn to cook but he said he and a neighbour are thinking of building a permanent BBQ in the park at the back of their house. When I queried how they were going to do this he said they can easily keep their distance and the park is actually private property belonging to their apartments so they can do this with no worries. Then I told him that it was a shame he couldn't come over here as I had a dripping shower and quite a bit of work I could give him. He told me that as a plumber, if the leak was serious and damaging structure, he was allowed to come out, but I told him I'd wait and see how it develops as I don't want to risk him getting into trouble since it's really not that serious (as yet).

Other than that I'm easily keeping myself occupied (or not, depending on the mood). I started doing the wasgij puzzle and it's going to take me forever but I'm quite enjoying it. My Italian teacher sent me more homework and I could always get back to reading about the French revolution in case there is ever a chance of something moving forward on my request for French citizenship. I'm ridiculously excited to see the seedlings I planted are going rampant and am going to go repot some of them already as the weather is so glorious right now. And I'm absolutely loving the Carl Hiassen book I mentioned previously. Frankly any man who can get the phrase "Apparently I murdered a man with a frozen lizard" into a narrative gets my vote hands down. So with that I'll love you and leave you. Off to shower (so as not to frighten the natives) and then attack that bloody whirlygig with a pair of underpants on my head! 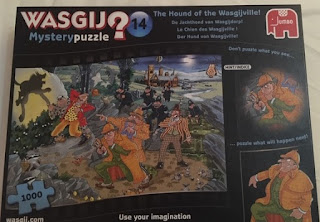 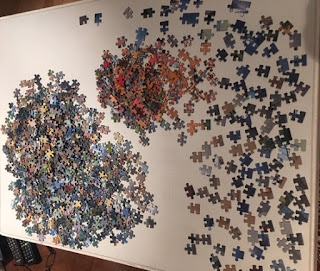 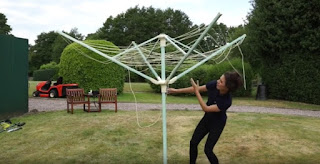