Well I guess like most people, there isn't an awful lot going on chez moi! There's only so much you can do within the confines of four walls anyway isn't there. But on day 18 of total lockdown I'm still ok. Feeling a bit sorry for myself yesterday but nah, that'll soon pass. And we are so, so lucky that the weather is beautiful. I can open all the windows and dry my washing outside, although having just pulled the whirlygig clothes dryer out and tried to get that thing sorted may just be what does me in. Those things are evil! Or maybe I really am just losing it because I can't get it sorted right now so maybe the best solution is to walk away right. I have been putting my washing out on my balcony and you get almost the same wonderful fresh air smell as being on a washing line. Then I decided to hang my bed linen over the balcony pending getting the whirlygig sorted, so it really does look a bit like a street in Naples at the moment but who cares. I was thinking the other day although I have a dryer I doubt that I use it once a year - round here people just don't use dryers. The washing gets hung on drying racks or out on the whirlygig thingy but not bunged in the dryer, and you know what, it's lovely that way. Everything just smells so fresh. Add to that the sunflower seeds I planted the other week are starting to come through and a few lettuce seeds and all almost feels good with the world!

As for local news, the Swiss have clamped down their borders even more, so I couldn't go into Switzerland now even if I wanted to. My oldest has to go back in to the office as from next week but as they live in Switzerland he will have no problem. Jordan and Jen are both still working and that's a good thing I think, Jen because she's a nurse and Jordan, as a plumber can work throughout and I believe they'll be relatively safe if they follow the right protocol. Jordan told me that they are mostly just his company working on huge projects and mostly outside so fingers crossed. There's going to be a sad day of financial reckoning at some point anyway isn't there, in addition to the horrendous physical toll but hopefully that can all be dealt with appropriately at a later date!

In French news I was reading the other day that so far the French have issued over 360,000 fines to people being out and about without the appropriate paperwork so at a rough estimate of €135 per fine that, hopefully, will pump almost €48 million back into the economy. As for life "in real time", I just went out shopping today and everything was fine. A little bit busier at the Fresh store maybe but still fine thankfully. I was looking at the UK news the other day and already there is a significant increase in incidents of domestic violence. Here in France too I imagine because the other day I received a message to say that if I needed to I could dial 114 "under any circumstances" and there would be a response from the gendarmerie. Sad isn't it, but I think we all knew that was coming!

And I see that the NHS Nightingale hospital has just been opened in London. Built in just two weeks with four thousand critical care beds it's a great tribute to just what can be done isn't it. 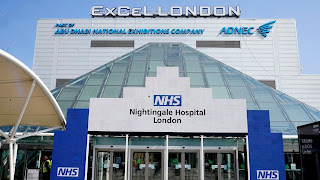 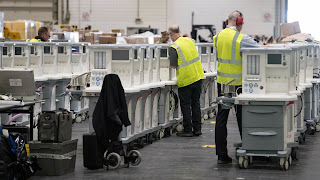 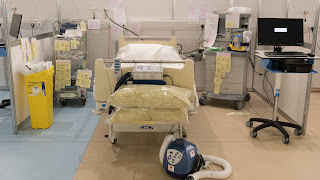 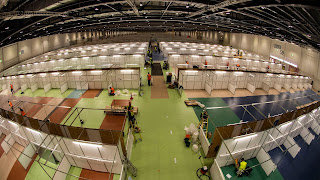 My nephew got in touch with me yesterday to see how I was. I image it's "look after the old biddy" syndrome but given that he is only six years younger than me I may be being unkind. He was saying that he was working from home and it was non-stop, and while he had tons of time available to him and loads of projects that needed doing he couldn't do any of them because the stores were shut. So I told him to put aside his socialist ideals and order stuff from Amazon (or wherever) and he admitted he hadn't actually thought of that! Hey, if I can support local businesses so much the better but if, in the meantime, I need to use Amazon I don't have a problem with that - it surely keeps someone in a job, however crappy that job might be.

And talking of Amazon I decided to give my (former) mother-in-law a call the other night to see how she was doing. She's 84 and not in the best of health so you can imagine how the conversation went but while we've had our moments I've always been very fond of my MIL (and pap too, although he died nine years ago). She was telling me how wonderful it was to see Jordan again after nine years, and to meet his wife "in the flesh", and while they couldn't always communicate directly it was lovely. Jordan told me she kept saying "I love ya honey" over and over again, and that makes it all worthwhile doesn't it. Then she mentioned that did I remember McLaren farm, just up over the ridge from her (no, not really) but apparently it had been bought out by Amazon and they were going to build a huge warehouse up there (right near Pittsburgh airport) and were taking out the forests in the meantime. And then a neighbour had wandered over to her place and said that he had seen a bear down at the bottom of her property, and a couple of days later two other bears running across the road, no doubt displaced by the tree-felling to build the new warehouse. So "can you imagine, he's seen three bears in two days". When I asked her if any of them had a bowl of porridge in their paws she just cracked up laughing. We always did get along and I ended up with a 90 minute phone call which was well worth it for her to get (I think) a lot of things off her chest and a good laugh to boot! She had told me that she was pretty bored as she couldn't go out so I went on Amazon and ordered her a copy of a book I had heard was pretty good (although I haven't read it myself yet, even though I have it) and a jigsaw puzzle also. Just anything to kill time I guess.

In other news I got my grass cut the other day. Took me an hour to get the bloody lawnmower started and just 45 minutes for me to fly across that thing and do the deed. But at least now I know why I don't want to do it myself anymore. I don't have a lot of land but the land that I have isn't flat and if I can pay someone to do that crap then so be it. And then when I saw on the British news that the wild goats up on the Orme in north Wales had started coming down into Llandudno and eating away at people's private gardens it just tickled me. We didn't get to go up the Great Orme when I was home for my brother's funeral but I will definitely get to it at some time. 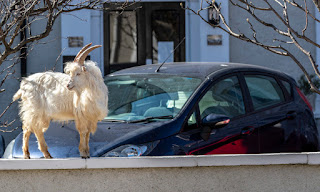 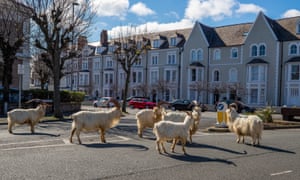 Then yesterday I received a notification from FB regarding a request for people to volunteer to sew scrubs for the local hospital so I forwarded that to my sewing club and hopefully we'll be churning those out soon enough.

But finally, did anyone see the latest press conference from the White House. The Kushner BS??? Seriously??? I actually can't bear to listen to any of the tangerine buffoon's speeches any more but then to have him delegate contractual purchasing of masks and other protective equipment to Jared??? But the worst part was Jared then gave a speech (as much as I could bear to listen to it) and vomited out words to the effect that "people need to think, when they are electing their mayors, governors, president, etc. who will be the best person to deal with this in the event of a crisis"! Damn, since when did Kushner do stand up comedy?