Well President Macron addressed the nation tonight to let people know the "state of play", or what is and isn't happening regarding the coronavirus situation in France. For starters, what isn't happening is any relaxation of the lockdown. In fact, he more or less said "forget about it until 11 May and we'll talk again then", although I may be paraphrasing somewhat! So while there has been a slight easing in that some garden centres and one DIY place (that I know of) are opening for kerbside pick-up, nothing will change for me at least until 11 May. On that date, all being well, younger children will be going back to school/nursery, although older students facing exams won't be going back until later. He then said that it is now "our turn to help" nations just starting out on this journey, specifically mentioning that France would be doing its best to help African nations and forgiveness of their debt as a way to help. I'm not sure what he means by that exactly but I suspect my taxes are going to be going up either way. Not that I'm complaining, but I reckon higher taxes will be on the horizon for all of us when this is over! He also said that "European borders" would remain closed until further notice. Now whether he meant intra-EU, or including extra-EU I have no idea, but at this point it's a moot point as I'm stuck within 1 km of my home anyway. And now that makes Italy seem so close - and yet so far! It's an odd thing though to see the way that the French President speaks during these TV addresses, ending with vive la France and all that, while the Brits' nightly addresses usually end with a kinda cheerio now or toodle pip! Vive la différence, I guess! 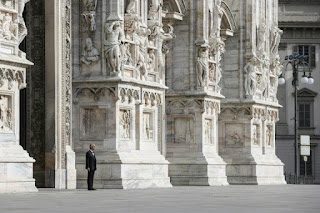 Other than that I think I'm getting the hang of this doing nothing business. Seriously, I have lots to do but I'm realizing that it's all right to work a bit, sit in the garden and read for an hour, work a bit more, read some more. Stuff is getting done but I'm finally learning to switch from permanent fifth gear to something approaching second/third gear, and I think this lockdown may well have something to do with it! As an aside, while this pandemic is awful I hope some good will come out of it - like people learning to slow down and realizing what is really important. Well that and, as I was saying to my friend today, maybe this enforced kindness to our environment could give us a kick-start into really doing something about climate change and pollution once this is all over, rather than just paying lip service to saving our planet!

I've also been taking the time to catch up with friends, so yesterday I chatted for ninety minutes with an American former neighbour of mine, now living in Ireland, and had a great time catching up with all her news - all the more so as I get the feeling that she managed to get a lot off her chest during that chat. I hope so at least. Her son had planned his wedding in Spain in June and I had been invited. When I told her I didn't know what to do as I wasn't sure what the travel situation would be at that time, she said not to worry as it turns out that since so many people will be having problems (the bride is from the Czech Republic), her son and his gf have postponed their wedding until July 2021! Shame isn't it, but there doesn't seem to be an alternative right now. Then today, in addition to chatting with Jordan and Jen and my friend, I also called my long-time friend - you know, the one I had shared an apartment with when I first arrived in Geneva. Well she was out on her daily walk so we didn't get to chat for too long, but she was saying that, like me, she's strangely ok with this lockdown for the most part, with just the occasional wobble. I asked her if she thought we were weird because neither of us were having too much difficulty coping with the present situation, but she just laughed and said nah, we're just self-contained. And maybe she's right, I really am handling this solitude pretty well, although I suppose the next four weeks could really test that "self-reliance" I guess!

Other than that, I realized that Saturday was the 18th birthday of Alexandre, the son of our neighbours who always join in with our board game evenings. Poor bugger, not able to have a party with his mates. Well I didn't have a card of course, so I made my own and took it over there and he was tickled pink! 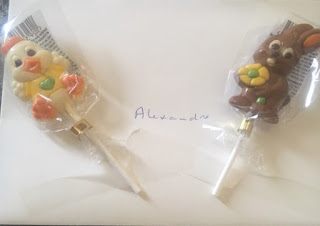 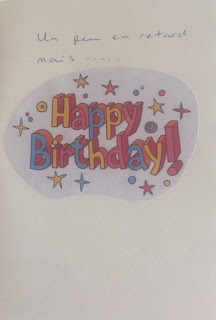 Then tonight I had a phone call from my gardener asking if he could come over tomorrow. I was surprised as I had assumed he wasn't allowed to be out working, but I explained that although I had cut my grass myself on Saturday he was welcome to start up again in a couple of weeks' time (phew, that's one man I'm glad to keep in employment)!

And can you believe it's almost a year since the bombings in Sri Lanka? What with all the coronavirus news the bombings weren't mentioned on Easter Sunday, although I'm assuming there will be some mention of it on 21st April, the actual one-year anniversary. It seems unreal and so long ago to me now!

Anyway, to wrap this up, with another month of lockdown I wonder what the chances are of my starting (and sticking to) an exercise routine and losing some weight during the four week period between now and 11 May? Not high I guess, based on previous experience, but it could be an interesting starting point I suppose. Then again, if I can't get to the hairdresser for another month and have to keep resorting to the "home cut", I might need to lose weight in order to take people's attention away from my dreadful haircut!