Well not quite yet but all being well France will begin easing some of the lock down restrictions as from next Monday, so fingers crossed. They have said, however, that how the restrictions are eased will depend on which département (state/county) we're in and where it stands as far as Covid19 is concerned. From what I can tell so far, Haute Savoie (which is where I live) should be one area where the restrictions can be eased more fully, although I'm still not sure we can cross the borders, either into Italy or Switzerland just yet. I said to my friend, the first thing I'm going to do is climb up Cou, which is the mountain behind my house that you can see in my header picture. After that, a trip to the local tip and to drop stuff off at the charity store and I'll be a happy bunny (oh, and a trip to the hairdresser's to get this mushroom cloud on top of my head whipped into shape). Other than that I don't see me mixing too much with anyone, although it will be good to see my kids. Just a few walks to get back into the swing of things and I'll be happy!

Just to rub it in though my friend sent me these pictures of Keukenhof (Holland), where we were supposed to be last week. Oh well, there's always next year I suppose. I'm still very much of a mind to travel when all this is over but I don't see it happening for a long time sadly! 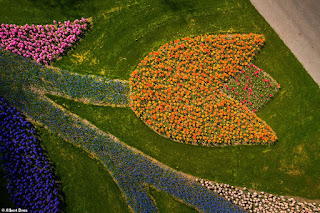 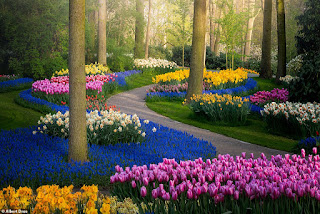 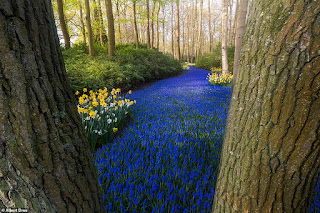 Jordan sent me a message last night asking if I knew what blood type he is. I don't as it turns out, but I guess Jen was looking at his vaccination card and trying to make sure he is up-to-date. Apparently he needs a polio update and I told him to check his tetanus too. The good news is that he's going back to work tomorrow after a month of being furloughed. It'll be good for him to get out the house, I suspect it'll be good for Jen not to be the only one working, and it'll certainly be good for their finances!

I'm more or less finished painting the kitchen and I have to say I'm quite pleased with it now. I think the deciding factor was when I painted over a corner wall that had a kind of coppery covering on it and now everything looks pretty clean - well everything, that is, except the kitchen door - which now looks grubby, wouldn't you know! I've left the paint out as I'm sure I'll spot parts that I missed tomorrow in the daylight so maybe I'll just use the same paint and do the inside of the door too. I'm not sure about the other side of that door as it goes into the living room so I'll have to have a think about that. Now that everything is cleaned up and put away it looks pretty good, even if I say so myself. With the weather predicted to pick back up again next week it'll hopefully motivate me to get back out in the garden and pot up/plant out my seedlings, before they start to resemble triffids in their little greenhouses!

When I came in tonight I caught the tail end of Ben Fogle's New Life In The Wild and thoroughly enjoyed it. Now Ben is very easy on the eye anyway but I like him too. Tonight's episode was shot in Croatia with a former elite athletic coach who had a "spiritual awakening" and just got sick of the cut-throat atmosphere in elite athletics so gave everything away and set up home deep in the forest in Croatia. He built his own home and was living in splendid isolation until he met his girlfriend, who was a teacher in the local town. Ben does these programmes on people who just chuck it all in and opt out of society for the most part, and I really enjoy them. It's not a life I would want, but I have sometimes wondered if I actually could chuck it all in and live a simpler life on very little somewhere else. I don't know, but I would never rule anything out. Heck I never thought I would move to Switzerland at 21. Then I never thought I would resign and go off to Bali and Australia on my own for six months, so I guess the answer is "never say never" huh!

And finally, I've been seeing this advert on TV lately and I wanted to post it simply because it makes me laugh. I have a very Gary Larson-esque sense of humour so I hope you enjoy it as much as I do!