I'm so glad I made the effort!

I gave myself a real talking to yesterday. My ideal future always involved being done with work and having plenty of time to "go hiking in the mountains". So now I'm retired and do indeed have plenty of time to go hiking in the mountains - except I'm still not fit. When I was at school I loved sports, all of it, played basketball for my county for two years and was up for anything. I guess many of us were the same, right? But then four years at college and having no time (long commute - the story of my life it seems, working weekend jobs and so on) and the sport that I loved so much went out the window. Then came my job in Switzerland and while I skied that was about it. And you know how the rest of it goes don't you. Work, commute, marriage, family and I just became totally unfit and hated it, but obviously not enough to do anything about it. But now what's my excuse? I don't have one right, and I know it. Anyway, my neighbours were telling me on Monday that they had just come back from a short hike at the Plâteau de Cenise so I thought "that's it, that's where I'm going on Wednesday". Jordan and his mates used to hike up there when they were younger and just camp out up on the plâteau. Jordan even used to strap a wooden garden chair to his back and lug that up there with him. I told him we had plenty of fold-up camping chairs but nope, he wanted that chair, so lug it up there he did. He must have looked like King Canute sitting up there in the middle of the mountains on his chair but what can I say, a kid's gotta do what a kid's gotta do. Cenise is also the spot where my friend, Valérie, scattered her son, Hugo's, ashes after he was killed in a horrific car crash nine years ago and when the kids used to go up there to camp they always took flowers to leave for Hugo!

Anyway, back to the plot. There is a road to get up there that I absolutely hate. It's more or less a bloody goat track and basically a one lane road with a few passing points. You get hairpin bends and cars coming to within a few millimetres of each other. Another coat of paint and you'd take the side of your car off. So I wasn't going to go up that road but headed out looking for the other, easier, road, but guess who screwed up. Yep, I ended up back on the road from hell, called the Gorges du Bronze, but with my heart in my mouth and on a wing and a prayer I actually made it up to the parking lot. Let's face it, there was no reversing back down or doing a u-turn anyway was there!


When I got further up into the meadow land I saw the most amazing alpine flowers ever. Not at the very top, but about two-thirds of the way up, they were just stunning. I couldn't stop to take a picture (for obvious reasons) so had to use a stock picture but those wild flowers were just so beautiful. Actually I've scattered a couple of packets of wildflower seeds in my garden and will be well pleased if they turn out anything like this. 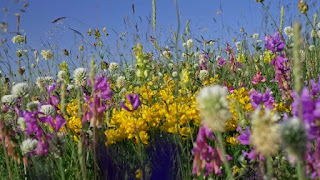 Eventually I made it up as far as I could go by car, slathered on a smidgeon of sun cream and set off. And here's where I get annoyed at myself. You see, it wasn't even particularly hard walking but I was puffing away like a blue whale for the first 15 minutes until I got into my stride, and that's just ridiculous at my age. Okay, losing 40 lbs would probably make it a lot easier but still!!! There were much older couples on that walk - probably nearer 80 than 70 - and they just plodded on at a steady pace with no apparent difficulty. I know they've probably been doing it all their lives but still, you can see why I get annoyed with myself can't you. Anyway, I made it up to what was my initial destination of the cross, but then realized it was only another 20 minutes to the plâteau itself so just kept on going, for a total walk of about an hour, I guess. 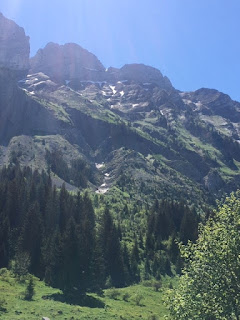 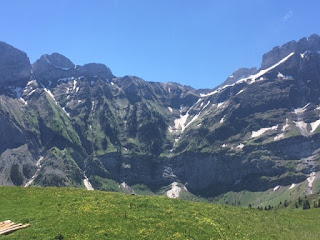 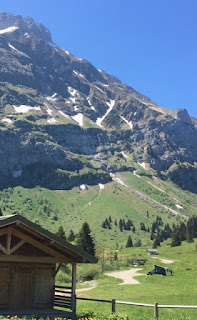 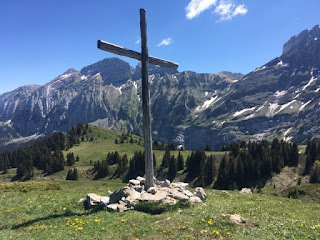 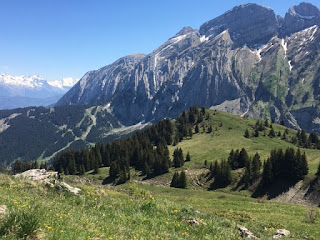 The highest point is at over 1,700 metres and to be honest I should have known better with the "sunscreen business" because I didn't use it often enough!!!! It is deceptively cooler at altitude but the sun's rays are that much harsher so I managed to burn the back of my neck a bit and also have a rather fetching "V shape" on the front of my chest the colour of a turkey cock's arse (as my dad used to say). Still, I guess it wasn't as bad as it could have been. Many years ago, before I was married, my then boyfriend and I went skiing for the day at over 2,000 metres. I had put a "dab" of sunscreen on in the morning and then forgot all about it. The end result was that I got sunstroke and my face swelled up to the size of a basketball. Then my boyfriend fell over in the parking lot on the way back and broke his wrist. To say we should have stayed home that day is probably an understatement! 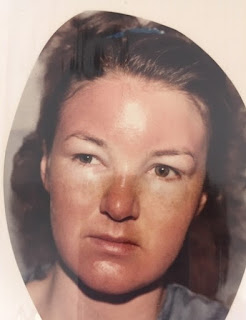 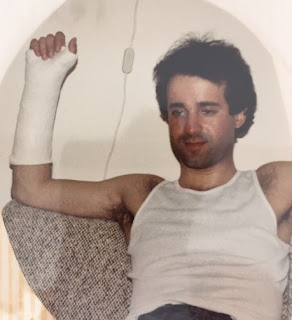 When I got to the top, the elderly couple behind me branched out to continue on so I asked them where they were headed. They said the Rochers de Leschaux, which was about another couple of hours' walk and quite tricky in parts, but the lady called it "sublime", said it was a nature reserve and you could see mountain goats, marmots and all kinds of wild animals. So that'll be another one to add to the list, once my fitness levels are up to it (if ever). 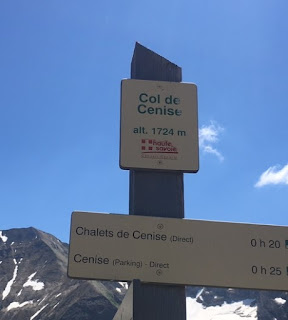 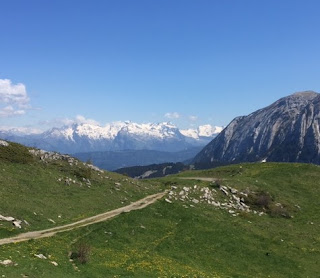 All in all I probably only bumped into 10 people in total all afternoon, although I did spot one lady about 300 metres further down from me wearing a face mask???? She's in the middle of the alps with no-one around and still feels the need to wear a face mask? Oh well, each to his own I guess!
Posted by Treaders at 12:28