Crikey, one minute I'm lazing around doing nothing much at all and the next everyone and his uncle decides they'd better come over to my place! To be fair I was expecting the roof guys this morning as they had called me last week, so I crashed out of bed at what is now an ungodly hour for me and jumped into the shower and waited, and waited and …. And then I got a call to say that they would be another couple of hours because they had to take the generator back to the depot at Albertville as it was playing up! Oh well, what can I say. So four of them turned up around 11.30 a.m. and got started covering everything up and then up on the roof to start some sort of treatment, to be followed by pressure spraying, and then more treatment. I'm not exactly sure which order they work in but because they were late arriving they said they would only do one side of my roof today and if it was all right by me they would come back tomorrow to do the other side. It's not a problem for me as I'm hardly going anywhere with lock down am I! My friend sent me a "good morning" message and I told him I was up to my eyeballs in men so he said "enjoy", to which I replied that I would but that we were careful and using protection!!! 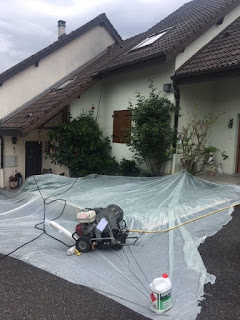 To be fair, I thought they did a really good job covering stuff up - and not just the driveway, but the plants and grass also. When I explained to them that my one neighbour's car was broken down and they couldn't move it they just said no problem and covered that up too! 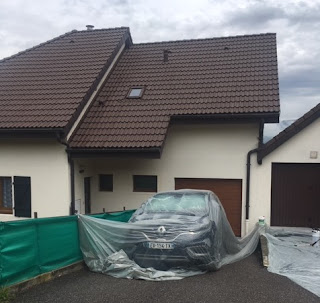 Since I knew I was going to be stuck here for the morning I set about and planted up a few broccoli, courgettes and kale at the top of the garden, then decided to bake a cake "just in case" and then realized that my kitchen door was looking pretty drab now so set to and got that painted. Nothing too strenuous in and of itself but enough to keep me busy - and not think about how much I needed to pee! You see, the previous owners of this house removed one of the downstairs walls and repositioned the front door, which gives a much better flow to the house but it meant taking out the downstairs toilet! Big mistake! While the plumbing is still there obviously, if I were to put that toilet back I could actually open the front door while sitting on the loo - not a good look even if it might scare the Jehovah's witnesses away! There are two bathrooms/toilets upstairs but they are both under the roof with skylights so I didn't fancy nipping up there for a pee with a chap wandering over my roof with a pressure spray (again, not a good look). Thankfully after they'd got all the plastic sheeting laid down they took off for half and hour to get something to eat so all was not lost and the relief was palpable!

Then out of the blue my gardener showed up, so another white van on the driveway. He comes and goes as and when and I pay him at the end of the year so it wasn't any trouble and the garden looks a lot better now of course. In this kind of weather, though, you could probably cut the grass twice a week, though I'll resist temptation to interfere. I got him to dump all the grass cuttings onto a large sheet of cardboard I'd laid out under my hazelnut tree so I now have the makings of my very own compost heap!

And then the fuel guy called and asked if he could make a delivery as he was in the area! I'd just ordered 1,100 litres of fuel since they're practically giving it away right now but crikey, the neighbours must have been wondering what was going on chez moi. Which brings to mind a story from back in the 1970s. My sister was dating her now-husband who was a police motorcyclist. One day he and a few mates were in the area and decided to stop in at mom and dad's for a cup of tea. One of the sons from the very large family next door was in the army and he must have had the same idea as my brother-in-law so he and his mates showed up in a huge army truck and parked behind the police motorcycles. Again, the neighbours must have wondered what the hell was going on when they saw that lot parked out front!

But now everyone has gone home, I've cleaned up the kitchen and moved some of my more fragile plants into shelter as there is a thunderstorm on the horizon. I love a thunderstorm but my plants not so much! So all in all I'm knackered. I've again done over 10,000 steps today without leaving my property so I reckon, given my obvious new-found fitness, it might be fun to sign up for the below as a starting point for my new fitness regime!