A belated happy Mother's Day to all you ladies out there who celebrated Mother's Day this weekend. It's difficult for me to know when to celebrate because in the UK Mother's Day is in March, in Switzerland it was this past Sunday and in France it's the last Sunday in May, so my lovely second son was actually born on Mother's Day on 31 May 1992!

In gardening news, while I have a hard time believing it, given what a cobbler's job I did, the potatoes I planted recently have started to grow. As I said before, I think I took about 20 minutes to throw down some cardboard, poke a one inch hole into the earth underneath it (because the ground was so solid I couldn't go any further) and then bung in a couple of old sprouted spuds and top with grass clippings - but wadda ya know - those babies have started growing. It's almost as exciting as giving birth, but without the pain and no Johnny Bench sitting there looking at your fanny! 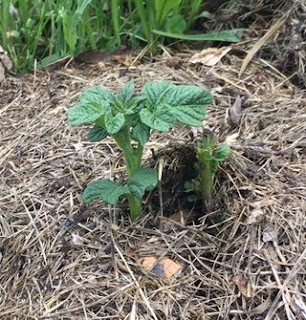 And is it just me or does anyone else love the smell of tomato plants? I've always loved the smell of wet grass but when it comes to snipping off the middle shoot of a tomato plant I just love that smell. (As you can tell, I'm getting old and obviously easily pleased!) I saw another YouTube video the other day and redesigned by plant-watering system using old plastic bottles. That now involves holding four inch nails in the flame of my gas cooker (holding the nails with a set of pliers of course) and then poking them through the bottle tops in order to drip-feed my plants - and it seems to be working. Man, I feel like some kind of nuclear scientist!

And going off on a totally different tangent, today I saw on FB a story by someone in my local region who had requested an appointment with Grenoble to hand in his naturalisation dossier in 2018 - and had got his appointment 15 months later! Now I requested an appointment to hand in my paperwork 10 months ago and there is still no response, so going by this person's timeline - 15 months to hand in your paperwork for citizenship (to see if it is ok) and then his citizenship appointment is scheduled for 2023!!!! So five years from initial request to even getting to put your case to request French citizenship!!!! Oh well, I will keep trudging along. I don't need to be French to stay here as my right to residence is guaranteed, but I want to do this. I'm just sad that it will take so many years to actually do it! Bloody Brexit!

In other news, I received a message from my Monday morning yoga teacher to say that they have been authorized to start teaching again and did I want to return to class? And yep, I do. I need the exercise anyway but I also want to start supporting local businesses, so sign me up. We will hopefully be outside and can maintain social distancing, but otherwise she has now built a separate yoga room in her garden so I'm happy to go ahead. Which makes me wonder what our Tuesday afternoon yoga class will look like. I'm the youngest (by far) and suspect many of those ladies will back out even if they announce the commune will authorize them to start up again. I will go though if they open up and then we can see what happens!

And funnily enough, I remember seeing a meme about people "desperate" to exercise in the UK after lock down. My friend was asking what I wanted to do after lock down was lifted and I said I wanted to go out walking but "they'd forecast colder weather next week". So he just laughed and pointed out how I had happily gone out walking in minus zero weather so what was my problem now? And you know, I don't have a problem, and I can go out when I want right? It did make me wonder though what will happen when all those people who were "denied their right to go out exercising" now have that right restored to them. Will they now go back to being the tech-ridden couch potatoes so many of them were as they were before? Who knows!


Today being the first day of "freedom", I decided to celebrate and head off to the garden centre as I've wanted a hummingbird feeder for a while. It's weird because while the parking lot was fairly full the shop was ok, not too full at all. For the first time I wore my mask (and was thoroughly miserable as I don't feel like I can breath) but hey, that's what we do right. But as I was about to set off to the garden centre my neighbour walked over and handed me a "red, white and blue" face mask which, apparently, all the local communes are now issuing to each household. So I got a washable face mask with elasticated string with the French flag on it. Fine by me, at least they are being proactive.


So I decided to head off to my local garden centre for tomato plants and picked up a few bits and bobs from the organic food store on the way out, including a bottle of organic white wine. Lovely! I haven't been buying booze during lock down - just because - but now I have a very organic hangover, sad to say. Serves me right I suppose, but I guess it's all in the name of freedom! Glad to oblige!