Under normal circumstances I guess we'd be almost half way through our 15 day lockdown here in France, but in all honesty these aren't normal circumstances are they and I fully expect that lockdown will be extended. What can I say! I realize exactly how lucky I am compared to so many people who are worried about their or their loved ones health and/or financial stability, so for me to complain would be unforgiveable. I have no intention of complaining anyway as I really am just fine. Maybe the truth is that I'm just antisocial as these past seven days being alone haven't bothered me at all. I do now have a lovely clean terrace and even though the temperature dropped today I spent a couple of hours outside weeding as it was good to get some fresh air. I also rather optimistically set up a few pots with tomato and courgette seeds to start off in my living room but - and don't laugh - I'm actually thinking I might lug one of my little old el cheapo greenhouses up into my bathroom and set it up in there for the seedlings. It's a large, bright and sunny room which retains the heat so I reckon they might do well there and hey, I live on my own and have no-one to impress anyway so why not!

I mentioned before that I went out grocery shopping on Friday and it was really fine - not really any shortages and plenty of fresh fruit and veg, which makes the images I see of empty shelves and people lining up outside the shops in the UK all the more saddening! What the heck is that all about? My sister and her husband got back from Spain on Friday and she said that although they stayed in while they were there, again there were no shortages in the stores!! Shame on (some) Brits for such selfish behaviour! My sister and her husband will be staying indoors for a couple of weeks, of course, and like the rest of the country just have to get on with it. André and Lily made it back safely from Thailand on Saturday on their regular, scheduled flight and again they will be working from home in Switzerland and self-isolating. I'm just relieved they're all back home safely. I found out today that three colleagues have now tested positive for the virus and one person has lost a family member in Spain so it really is hitting close to home now! 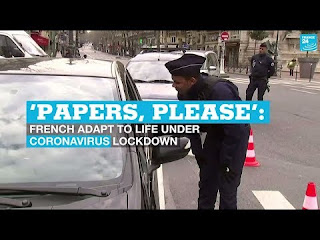 I have been watching the British government's nightly update on the situation and while I will never be a Bojo fan I have to say I'm impressed by the people he surrounds himself with, in particular Professor Chris Whitty, the UK's Chief Medical Officer. Although having a bit of a Mr. Bean appearance I've found him impressive and reassuring when giving his opinions and answering questions in an extremely composed and stiff upper lip kinda way! I suppose the good news at least is that Bojo doesn't keep firing his experts!

When I came in this evening I thought I may as well sit down and do some Italian homework that our teacher sent us. Just a couple of short stories to read and answer questions on so that took up another hour before I headed down to cook dinner. Another thing that surprises me though is that restaurants and cafés are closed in the UK now but they can still supply take-out meals! I suppose it surprises me because you have a snowflake's chance in hell of getting a take-out meal over here at any time, not just during a pandemic!!! Don't get me wrong, I'm glad these businesses can continue to provide this service for those who might need it, but it's just such an anathema to me because take-out doesn't exist here. There are no grocery store deliveries either. Maybe in Switzerland but not around here, so it's just not something we can count on. But what also surprises me still is how so many people just can't cook. I don't mean that they don't cook, but that they can't cook! I remember years ago meeting a colleague's sister who was over here on vacation. She had four kids and told me she never, ever cooked! Never! I think my jaw just dropped as I couldn't get my mind around the idea of never cooking for your family - or that such a thing was even possible! I suppose knowing the rudiments of how to cook went out the window at the same time as home economics classes did in school sad to say! What a loss those classes were. Both boys and girls at my school had to do at least three months each of woodwork, metalwork, sewing and cooking. We can't all be boffins can we and I really feel the loss of those classes did no-one any favours (although I was crap at metalwork, I have to admit)!

In other news I see that the UK put out a call to retired nurses and doctors to come back into service and so far 4,000 nurses and 500 doctors have stepped up to the plate. Given the fairly recent dispute between the government and junior doctors about their contracts I seriously hope that everyone remembers what these people are doing for us all right now, in particular when it comes to giving them the salaries they deserve!

In other news I had the weirdest message on my phone this evening. Around October last year I mentioned that I thought something might be wrong with my friend Brian in England as in the 10 years we had known each other he had never forgotten my birthday, always contacted me on Remembrance Sunday and always sent me a Christmas card - until last year, that is! I sent messages and tried his number but got nowhere, so given his age and his recent ill health I could only assume the worst. Well tonight I received a forwarded message from his number. It was a copy of a letter written to the Irish Times re the coronavirus. From Brian!!!!! So I wrote back and said "Brian???? Is that you????" and so far, several hours later, I've not received an answer. It's a bit like a couple of years ago when I woke up in the middle of the night to a "thumbs up" message from Ian, my friend in Bulgaria who died so suddenly about three years ago. In all honesty I think it's just a fluke, maybe a spam message or something, as I really think Brian would get in touch if he were able to, but it was definitely weird, and I still have the message on my phone, unlike Ian's message which disappeared after a few minutes! Maybe it was just Brian telling me to stay safe. I like to think so!

The big "joke's on you" I just read about is that Boris Johnson's father, Stanley, has applied for French citizenship on the grounds that his late mother was French!!! If that goes through it would allow Bojo and his siblings to also apply (his sister broke the news and is already rubbing her hands with glee apparently). So there you have it, another Brexiteer in the land of I'm all right Jack!

And finally, the UK is still not in total lockdown and the city of London is still open for business, with people simply being advised to maintain social distancing. Trouble is, while most people will indeed do the right thing some idiots will continue to believe the rules don't apply to them and ruin it for everyone. Just like the bloody idiot YouTube wannabe who, although not a Brit, must be a candidate for the Darwin Awards for the most stupid thing to do in her desperate search for fame. Apparently this "aspiring model" (aren't they all) and two-time guest on Dr. Phil, "took up the coronavirus challenge" and videoed herself licking the toilet seat on an airplane, all in the eternal quest for YouTube glory! Natural selection at its best (I hope)! 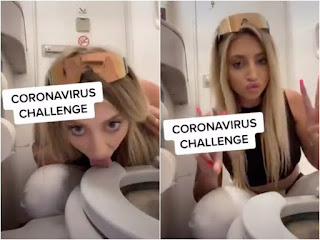