So it would seem that approximately one-quarter of Italy's population is now effectively in lockdown - 16 million people currently located in the regions designated as high risk in the coronavirus epidemic. I'm not at all sure from the news how this will all work out (I don't think many Italians know either). Are they going to be allowed out shopping? Should they go to work? What about businesses and services? I've no idea. What I do know is that Lombardy is just over the border from here. Forty-five minutes by car gets you to the Mont Blanc tunnel and in to the Aosta Valley on the Italian side, with Piedmont and Lombardy the neighbouring regions. As I was watching the news tonight they were saying that there are now over 7,000 cases of infection in the country, with an increase of 2,000 cases in the last hour alone - a phenomenal rate of acceleration! So now I'm just wondering if/when it will hit here. I'm eternally grateful that I'm retired and can self-isolate if necessary. Other than death, the worst case scenario would be "inconvenient" for me, but what on earth happens to the local businesses in particular, and the economy in general? Scary times indeed! 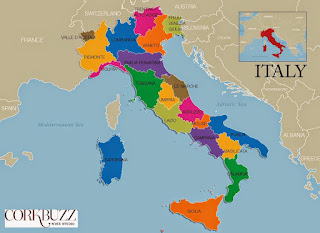 Even despite the proximity of Italy I haven't seen any evidence of panic buying of anything as yet. For some reason I bought a bottle of hand sanitizer about a month ago, probably the day I went hiking up to the waterfall and felt pretty grubby on the way down. I don't usually carry it with me unless I'm on my travels but I'm pleased to say I have some to carry around with me for the time being. And as for the "rush" on toilet paper - nope, not seen that at all. I had to laugh though at the chap in Australia who accidentally ordered 48 boxes of toilet paper online a month or so ago instead of 48 individual toilet rolls. Apparently he had the mickey taken out of him by his friends something terrible, so in light of the latest panic buying in Australia he published a rather funny video of "who's having the last laugh now"! Gotta love the Aussies!

Talking of Italians and toilets (we were weren't we?), at my Italian lesson on Wednesday we were learning the use of c'è and ci sono - "there is/there are". It makes sense in English but in French they don't distinguish between the two - il y a means both, so it was a novel idea for the French-speaking students in our group. Anyway, our teacher was asking us about our homes, our gardens. Do you have a garden? Do you have a balcony? etc. to get us to use c'è and ci sono. One of the things she asked was did our homes have doppi servizi, which basically means a full bathroom. Then she somehow wandered off on a tangent about how weird it was for her, as an Italian, to find bathrooms without a bidet. She said her grandmother would have been horrified to find no bidet and even she, as a 40-something Italian, found it strange that most homes round here do not have bidets. So then the conversation degenerated wandered on to the subject of bidets and their uses until I burst out laughing and asked if anyone realized we had just discussed bidets for the past 10 minutes!!! Either way we covered a lot of ground and it was a fun class! In amongst the different words we were learning she asked me if my home had la cantina, which, it turns out, is what the French call a faux ami, in the sense that la cantina is actually a basement and not, as the name would suggest, a cantine/kitchen! These are the kinds of words that trip you up when you learn a foreign language. For instance, in French sensible means sensitive and not sensible, so a faux ami! Gripping stuff isn't it!

Anyway, in other news I've managed to get some work done in the basement (la cantina) and the garden this weekend and it's been really pleasant. The crocuses (crocii?) and primroses are starting to bloom and my little patch of lawn is looking lovely - well at least to my eyes anyway - I don't need it to look like a bowling green! While I was outside working there was a knock at my door and a young lad asked if I would like to buy an Xbox 360 for €30! I told him I already had one (I don't but it seemed easier than turning him down), but since I saw he was going door-to-door I asked him why he didn't just put a notice up on the mail boxes round here. Well that must have sparked an interest in him because guess who ended up making him five flyers to put up!! I recognized him as the young lad who my neighbours had kicked out of my garden a few years ago when he was just coming in and breaking/stealing my ornaments. Actually he's the reason I put my side gate in, truth be told, but that's all water under the bridge now I guess as it was five years ago. At one point I asked him to write up one of the flyers (since I had a few to make) and he told me he "couldn't write that well"! I was stunned as he is 11 now! So I told him to just copy what I had written and he couldn't even do that! This is the youngest from the family I wrote about in another post where mom has run off with another man leaving dad and the last four of her seven children with dad - who is now in the process of drinking himself to death apparently! Remember - the one where their golden retriever followed me on my walk! It's sad really but what can I say. It didn't take him too long to see the sweets I had out on my cabinet so I told him to take one from each bowl. Well he ended up taking quite a few ("one of each colour", I think he said) and left with a bunch of flyers and pockets bulging with candy!

Then last night I did, indeed, go out with Ginette to the Soirée Réunionaise in her village but ... meh! It wasn't so great. They had four young women from Réunion who did a couple of African dances and that was pretty much it for the entertainment. I have to say the food was very good but pretty expensive, all the more so since they didn't include even one drink in the price. When I went to buy a glass of white wine they told us they only sold it by the bottle (????) so we both ended up having a glass of rum punch that nearly had us on our backsides!!! After that we stuck to water! She was telling me re her ex-boyfriend that she had recently sent him a "cease and desist" letter, which he probably received that very day, as he has been pestering the life out of her since she split from him, calling, showing up at her house and begging her to come back. She said it's funny how he was a miserable sod for three years and tighter than a duck's bum and now all of a sudden he can't do enough for her and wants only to lavish money on her!! In any case she told him to get lost and if he doesn't leave her alone she will take it further. Crikey, all that drama at 72!!! I don't do "drama" so I'm so glad I'm not in that situation. Maybe it'll be one of the requirements of the French citizenship aptitude test - how to throw a wobbly à la française! If so I'll have to practice! At about 11.30 it had turned into a blaring disco with strobe lights so I told her I was getting a headache (I wasn't but couldn't stand much more of it) and that I was going to leave. She agreed with me and we decided to leave at the same time but in the end I don't really regret going. If you don't try these things out you'll never know if they are good or bad will you! On the negative side, in order to make it on time to this do I missed the last five minutes of the England/Wales rugby match and it would seem that Wales managed to score two tries in those five minutes and I missed it!!! What a bummer! Just as I was leaving though she asked me if I skied. When I told her I didn't do cross country she said "no, downhill". Now I haven't done that for about 20 years but she asked if I wanted to go one afternoon when the weather is fine and we could try out a few easy slopes. So I guess it looks like I might be scratching around in my cantina some more looking for my ski gear very soon!


And finally I had the weirdest dream this morning just before I woke up. I used to get awful nightmares about being stuck in a maze or down a diamond mine when I was married (no prizes for guessing what they meant), or not being able to wash myself clean for some reason (again, no prizes), but all those kinds of dreams stopped after my divorce (and yet again, no prizes). But this dream had me sitting next to Boris Johnson (seriously????) while he was driving a bus through a tunnel (I do hope that's not a euphemism) and I had to keep telling him he was going over the central line or he was too close to the wall. What on earth was that all about? I wonder if that means ol' Bojo will soon be driving the country into a brick wall? Sadly I'm afraid that might be true if my dreams are anything to go by!
Posted by Treaders at 20:35