Well for us, at least, it started at noon today. So from today, and for the next 15 days, we have to self-isolate at home. There are exceptions, of course, and people will be allowed to leave their homes but you have to have a signed attestation de déplacement on you at all times. That basically is a form signed by yourself (wording proposed by the French government website) to say that you are out and about because (a) you need to get to work, (b) you need to buy essential supplies (groceries, medicines, etc.), (c) you need to take care of a vulnerable person, or (and this is the best one) (d) you've got to take the dog for a poop! Well it's not quite stated like that but I guess they know that people need to take their dogs out and people also feel the need to get out in the fresh air and exercise so we can actually go out for our jog (fat chance of me doing that) or walk but it must be local, we must be alone, and we must have that attestation on us. Failure to produce it gets a €38 fine, which can increase to over €100 for repeat offenders, so it's just as well to print it or copy it out and do the necessary I guess!

I had yoga yesterday morning and decided afterwards to go out for what turned out ultimately to be a "last hurrah" walk for a while. I took myself off to a place called Passy and spent a very pleasant hour or so walking round a couple of small lakes round there. But wouldn't you know it, all the skiers have gone home because they've closed the resorts a month early, the price of petrol is going down and down, the weather is glorious - and we're all now stuck at home! Sod's law, I guess, but it's a small price to pay even though I'm pretty sure the lockdown will be extended beyond the 15 day initial timeframe! 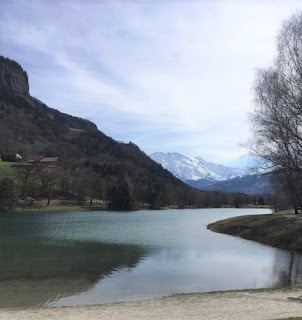 I spoke to Jordan yesterday and he will be going in to work, but the company they get most of their supplies from in Italy have already told them they have ceased production for the time being, so I don't know how long he will be properly employed. In any case he should get 70% of his salary whether he works or not but somehow I can see them finding plenty for him to do. Jen, as a nurse, is definitely going to be in full-time employment but she has also been put on a reserve list as a replacement for the hospital near me in La Roche in case of necessity. She hopes it doesn't come to moving here because she loves where she is currently working and even though she liked working in La Roche before she hated the administrators there, so I hope she can end up staying where she is. At this point it's out of her hands though isn't it!

I booked myself in for my regular monthly facial about 10 days ago which was very nice of course. Then the next day I found myself hacking bits off my hair with my sewing scissors so I dashed in to town to get it cut by a professional before I did any more damage. Then, remember when I left work and my colleagues very generously gave me a gift box as a leaving present? Well I chose an entry into a hot springs in Geneva with a massage to follow from that gift box, but what I hadn't realized was that there was a second free entry into the hot springs, to be used within one year. Well one year was up on 17 March 2020 so I also booked myself in for another massage last week - just in time, as it turns out, because since yesterday there is no more "non-essential" crossing of the Franco-Swiss border either!

My sister and her husband were caught short by this coronavirus and are in Spain at the moment and - we hope - have managed to get a flight out of there on Thursday. They are staying in their own small home there anyway so hotels are not a worry but in times like these I think everyone would prefer to be "at home" wouldn't they. My oldest son and his wife are in Thailand too. They booked it as a third anniversary trip and are loving it, although are somewhat "concerned" about the new travel ban. They've been in touch with the Swiss Embassy in Bangkok who told them that while things are ok there at the moment they should get back to Geneva as soon as possible. Today's flight out was fully booked and for Thursday's flight they wanted 3,000 Swiss francs ($3,000) one-way! Can you believe it! Their original return flight leaves on Friday anyway so they are sticking with that, but will keep the Embassy up-to-date if necessary. They've also looked at local air BnBs on the island and they say there are plenty if they get stuck, but it seems at the moment that Thailand is not overly affected by the virus (so far). Still, I'll be glad to see them safely home too!

My trip to Holland to see the tulips has gone down the pan of course so I'm waiting to see if they will reimburse or how that will work out. Can't be helped though can it. There does seem to be a fair amount of solidarity here with people offering to help older and more vulnerable people out - which is always nice to see! You hear so much about the bad side of the hoarding (not that I've seen any as yet, to be honest) and the nastiness and probably not enough about the good side of things do you. Like the florist who walked round giving away all his unsold stock today at lockdown!

And talking of "little ol' ladies", my lovely Tunisian friend from work called me yesterday to see if I was ok, what with me being a "little ol' lady living on her own"! Cheeky bugger - but it was very sweet of him anyway. All the more so since this little ol' lady decided if she was gonna be stuck at home for a couple of weeks it was time to knock some of the "must do" jobs off the list. So with that in mind I spent three hours pressure spraying the muck off my back terrace today, and very satisfying it was too. Well, satisfying for the first couple of hours but by hour three I was starting to get wet and slightly cold (in addition to having a face full of muck and crap) so I was glad when I finally finished up. To be honest my face is "as red as a turkey cock's arse" tonight (as my dad used to say), probably due to the wind blowing all that crud in my face, so in retrospect I probably could have done without the facial the other week! 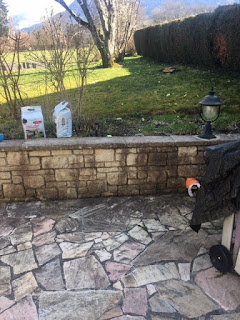 When I was looking through my bathroom cabinet for eye drops (got muck in my eyes from the pressure spraying) I realized I'd also got a couple of bottles of rubbing alcohol in there too, as well as a couple of (very old) disinfectant scrubs. Then, when I was reading Frugal in Istanbul's blog today (I can highly recommend it) she mentioned Turkish lemon cologne/sanitizer and I realized I actually had a bottle of it in my kitchen all this time. I bought it last time I was in Turkey as I loved it and the bloody thing has been staring me in the face all this time. So now I'm set to go, not that I'll bother with it at home as that's what soap and water is for, but it's good to have it in my bag just in case, or if the kids' need it!

I've got plenty of food in the house but I'll be curious to see what the situation is like when I do go out shopping (attestation in hand) later this week, or maybe even next week for fresh stuff. I suspect it won't be too bad anyway once people realize that supplies are not going to run out. Either way I'll not starve. Interestingly, the other week I intended to make stuffed cannelloni but realized I didn't have any ricotta when I got home. What I did have, though, was Boursin à l'ail (soft, garlic-flavoured cheese) so I used that instead and it was really good. I might get a bit sick of it by day 15 but what can I say, food is food isn't it! 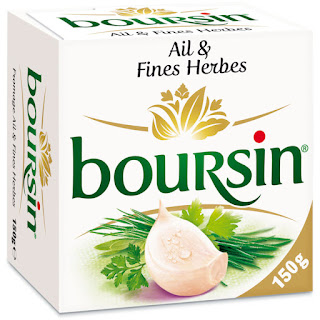 And finally, you know how FB suggests people you might know. Well at the moment it's going slightly mad because apparently I "might know" half the Indian sub-continent - or so it seems. I just delete all those suggestions but I had to laugh at the two I saw today. As it turns out I don't know either of them, but looking at the trout pout on the left and the dog on the right I think I prefer the dog! 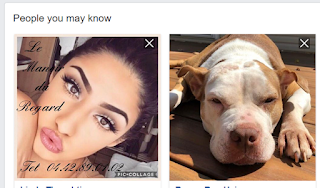