The news about the virus isn't getting any better is it - no surprises there, I guess. Italy had a "relatively" improved day yesterday with a dip in the number of deaths but it soon went up again today, sadly, with Spain looking to be hot on their heels. I saw on the news tonight that they have actually taken over an ice rink in Madrid to use as a makeshift morgue now. It's going to get a lot worse before it gets better isn't it!

Later in the news broadcast they were showing the plight of people trapped overseas (Brits in this case) and desperately trying to get back, with flights being cancelled left, right and centre. One poor family were trying to get home from Thailand but having just spent the last 24 hours in Bangkok Airport trying to get on a replacement flight they were getting nowhere fast. They could get a flight in a couple of days' time at a cost of £12,000!!!!! but, as they said, they didn't have that kind of money. Eventually (and I would probably say provisionally because who knows if "confirmed" flights will be cancelled between now and then) they managed to get a flight out on Sunday at an additional cost of just £2,000! But today is only Tuesday so what are they going to do between now and then? I can only thank the heavens above that my kids managed to get out of there when they did, and on their already scheduled flights. Again, as I say, this is just another facet of what is already a nightmare situation!

In better news they announced on the British news tonight that so far 35,000 volunteers have come forward to help out the NHS. That number is made up of retired doctors and nurses of course, but also medical students and interns in their final year of medicine. That's an amazing number of volunteers and the number is still rising. In addition, a nationally-organized volunteer scheme has been set up where people can volunteer in areas outside the medical field but where there is still a need, so hopefully some kind of order is being brought to the current madness.

Then this afternoon Ireland announced stronger lockdown measures to deal with the crisis, in addition to relief measures to be undertaken. I didn't catch all of it but one thing that struck me was that they had come to an agreement with private medical facilities and their staff to step in and work with the public sector on a not-for-profit basis to get them through this. In addition, there was guaranteed coverage by the government of unemployment pay (up to what sounded like a pretty generous limit), as well as a ban on all rent increases and evictions "for the duration". Over here I was expecting to hear President Macron speak tonight but ultimately we got the Minister for Health giving information on what is going on and, I believe, softening us up in time for an extension of the current lockdown for up to a possible six weeks! While I'm not thrilled at the idea of a six week lockdown, if that's what it takes to defeat this thing then that's what it takes - which made me all the more horrified to hear that Trump is pushing to get people back to work after two weeks against the advice of his medical advisors! I suppose, ultimately, if that happens only time will tell whether the "two week" or the "six week" roll of the dice was the correct one, won't it!

As for me, I'm still jumping from one project to the next but enjoying getting odds and sods done.  Even if I'm not making huge headway on any one particular thing at the moment that's just the way I roll. When I get fed up of sewing I stop and go down to the basement to work. Then when I've had enough of that I go out to the garden for a bit. As today is my neighbour's birthday (the wife), I decided to make up for my appalling cookies intended for her husband's birthday and make a batch of my "no fail" brownies. When they were done I ran round to their front door and played "Thunder and Lightening"! You remember playing that as a little kid right? Knock on the door like thunder and then run like lightening? Or was that just me? Anyway, she was delighted that I had remembered her birthday so while I was out back working on my raised beds a while later she wandered over to thank me (our back gardens are all open) - stopping a good 10 metres away of course. I was "shit shovelling" at the time as I was trying to empty some of the sludgy compost onto my raised beds but somehow that stuff had taken on the consistency and smell of horse muck and I was having a hard time of it. But then from beyond the hedge over at my other neighbours we could hear them barking out orders to each other. She'd say "but the hole is right in front of you" and he'd say "well just grab it with both hands"! So she'd yell back "you're behaving like we've never done this before"! At which point I commented to my neighbour that they were apparently making a porn movie! Well she got a fit of the giggles and the game was up. Turns out they were trying to put a new cover on their outdoor parasol but weren't having much luck! It's amazing how your mind plays tricks on you when you've been kept in isolation though isn't it!

I decided to become a proper little old lady too today as I finally dragged a card table upstairs into my TV room in order to do a "wasgij" I've had sitting around for ages (that also sounds like it has "porn movie" connotations doesn't it, but not a bit of it)! A "wasgij" is a jigsaw puzzle where the finished jigsaw uses the same characters but looks only slightly like the picture on the box. We'll see how long it takes me I guess. Additionally, in the "pass time" arena, I picked up a freebie book in English at my pilates class the other week and I have to admit I'm quite enjoying it. It's an easy read and I like his style, even though I'd never heard of this author before. I'm not sure if it's the kind of book you might like but I would definitely give it a thumbs up! 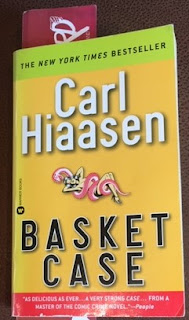 And while I know there's nothing funny about the coronavirus, there have been a few black humour stories/events all the same. One guy was saying how ridiculous it was to have a sign saying "wash your hands" at the entrance to the motorway. I mean, can you imagine getting pulled over by the motorway cops with your hands in a bucket of water singing two verses of God Save The Queen! And I also spotted the "Italian mayors' rants" that is doing the rounds at the moment too. As I say, while there is nothing funny about this pandemic, some of the things these mayors came out with were hilarious - unintentionally maybe - but hilarious nonetheless! And here I would point out that while I am indeed learning Italian I'm not quite at the level of understanding these guys so I took the translation from the sub-titles - and apologize in advance for the language. Well one mayor was going absolutely ballistic about people not respecting lockdown and "no, having your hairdresser come to your home instead of going to the salon does not constitute an essential or urgent necessity! You'll be in a goddamn closed casket so nobody will be looking at your f....ing hair"! Again, sorry about the language, but somehow that just about sums it all up doesn't it!
Posted by Treaders at 23:24