Well I got over myself pretty quickly last night. I knew I would anyway, but I guess I was just a bit surprised at how the news of the extended lockdown hit me. It was a pretty stupid reaction in any case because we were definitely expecting it and it's the right thing to do anyway! I suppose it was more a result of not actually speaking to anyone all day to be honest, and while mostly I'm fine with that sometimes it can be hard. Then again, as I've been sitting here reading today I've heard the neighbours having a couple of right ding-dongs so I guess we all have our crosses to bear don't we!

Anyway, this morning I sent a message to my friend asking how he was as I could tell he'd had a bellyful yesterday too. Instead of just text messaging him though I decided to video-call him on WhatsApp - only for him to answer me from the bath! Ha, I should have remembered! When he gets up he spends a good 45 minutes in the bath reading and while I figured it was late enough that he would be "decent" I obviously timed that a bit off. Oh well, no worries, he wasn't the slightest bit bothered by it and I wasn't either so we had a nice chat, which I think did us both good in the end. After about 10 minutes he said he had to go because he was running out of battery and bugger me if he didn't get up to get out of the bath just as his battery ran out. Teasing again!

After that I sent a message to my oldest son to see how they were doing. It's one week today since they got back from Thailand so I figured if they had been in contact with the virus in Thailand or on the return flight they would probably be showing symptoms by now, but he said they were both fine. They're working from home at the moment and André has another week of that but after that he has to go in to the office to work as he is on a list of "essential staff" (I guess there's a roster), ironically working at WHO. Still, with Geneva being as quiet as it is at the moment it shouldn't be too hard on him going into the office.

So all in all today was a much better day. I got some cleaning and gardening done and paid a few bills before sitting outside in the garden for an hour to just read and take in the sun's rays. It's an odd thing though as about this time every year my top bedroom seems to get an infestation of ladybirds. For a period of about three weeks, every time I go up there there are maybe 10 dead ladybirds on the floor. I guess there's something up in the roof, but I'm hoping when I get my roof done that will be taken care of too. I also found a bunch of old magazines, and the one below, in particular, has really whetted my appetite to get back out walking when this bloody pandemic is finally over, as it shows all different hikes in my local area (and even has proper maps inside)! I can't wait! 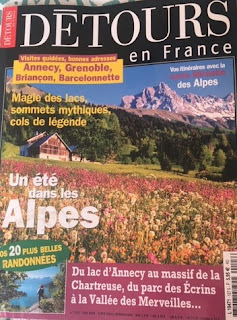 And talking of staying in touch during the pandemic, Marksgran mentioned how she was going to try to teach her mom how to use an iPhone so that they could stay in touch! Good luck with that. I know I could never have gotten my parents to use one of those things. Heck, my brother in England still can't use his (but having fingers like sausages doesn't help either). In fact, my brother in Wales who died last year was another one. He was a smart guy but his wife obviously took care of "all that technical stuff" so when she died suddenly he was lost. I remember him being delighted when I sent him an email and coached him through how to "reply" back to it. We eventually got him to use an iPhone too, although that never really took off until he met his new lady friend 18 months after my sister-in-law's death and with her being 150 miles away he had to learn how to use it. It's amazing what you can do when there's an incentive isn't it. When he finally realized he could actually leave messages on my phone it was pretty painful - you'd have thought he was in an extra in MASH, always ending his voice messages with "end of message, over and out"! I think he might have had delusions of being some kind of Rambo-figure with his new-found technical skills!

And finally, I've been watching the news on the pandemic obviously, but I've been trying not to watch it all day long. Just maybe once in the morning and once towards the end of the evening. I have to say, if I ever get caught in a pandemic again (and I hope I don't) I sincerely hope I end up on Team Cuomo! Now there's a leader! He gives the facts, sets out his plan, pulls no punches but also gives hope, I feel, and he knows his stuff. I don't know much (or anything actually) about his politics but from what I can see there's a man who can actually rise to the occasion! Very impresive!