Well it's day three of lockdown here and everything's going just fine. Well more than fine, strangely enough, because I've had this long list of things that need doing for ages and I'm finally starting to tick a few off. Now given that I no longer go out to work and in normal times only have a few hours' activities a week, I'm just wondering why my list ever got to be this long in the first place. But it's quite satisfying actually getting down to some of the nitty gritty. Yesterday I spent another couple of hours pressure-spraying the front of my house and hosing down the balcony, so that's the pressure spray put away (hopefully) for another 12 months! Then today I decided I was finally going to fill in a few of the holes in the concrete paving on my terrace. They've been there for a while but of course pressure-spraying showed up a few more eroded spots so I lugged a bag of quick-setting cement up from the basement (set like a brick already for the most part) and after bashing the hell out of it with a crowbar and a lump hammer I made up a small bucket of cement and starting "trowelling" it into the holes. It didn't look very good until I got water and a cloth and started tamping it down and now, while it's hardly a professional job, it definitely looks better than it did before and will hopefully stop bugging me every time I see it. To be honest though, I could probably have just mixed up another batch of that dreadful cookie mix I made for my neighbour the other week and used that - I bet the crazy paving would never move again after that!

I've also been trying out a few new vegetarian recipes as "going veggie" is something I'm quite interested in. I don't think I'll ever really go totally vegetarian but I am more and more drawn to that way of eating, all the more so since watching the documentaries Forks Over Knives and Food Inc. recently. I just feel more and more that meat is not really necessary in our diets and the inhumane way in which so many of our animals are raised and slaughtered makes me want to try to eliminate meat as much as possible. Trouble is, at the moment everything seems to be "chickpea curry" , or some version of it, and while I love chickpeas there is a limit. So today I spent a fair bit of time cooking yellow dahl lentils with aubergine and tomatoes. I'm not totally sold on it (maybe too much tomato sauce) so the jury's still out on that one. I did, however, use up the mushrooms I had stuffed at the back of my fridge to make garlic mushrooms - now they were delicious (but it's probably just as well I live alone - all that garlic you see). Still in addition to keeping vampires away I'm hoping it will also keep the coronavirus away - well that and turmeric maybe!

Earlier this afternoon I sent a quick message to the lady I know at the village Mairie and said that I was able-bodied and had time on my hands if there was any way I could be of help. She wrote back and said at the moment everything was pretty quiet but if I knew anyone near me who was living alone I might want to check in on them. So I gave it some thought and the only person I can think of near me who lives alone is me! Ha, job done then! But with that in mind I thought I'd better check in on my brother in England who also lives alone. I never usually call him because he is a technophobe, doesn't really know how to use his phone and in any case he stutters so he hates using it. But I had a quick chat with him anyway to see if he was ok and mentioned he might want to get a few bits and bobs in "just in case"! I know he's fine really but with my sister away I thought I'd better let him know he could call me if he was worried about anything. In any case, my sister and her husband finally made it back from Spain today on what they were calling a "repatriation flight". That's good news as the Spaniards have told all tourists it's time to leave the country as they are shutting all the hotels down! So one down, just the other one to go then!

I had a good long chat with "the other one" yesterday - i.e. my son who's in Thailand with his wife. I guess he was bored because we got into a rather political debate about the state of US politics. I shouldn't do it really but I quite enjoy a good banter with him. He is very politically-minded and I would say pretty well informed. He once told me that he not only listened to US news stations (as well as the BBC), but also to Al Jazeera, because if you wanted to know the real truth you had to hear a story from all sides didn't you. I thought that was pretty smart actually. Anyway, I can't say he's pro-Trump but he is just so disgusted with the Democrats it makes his blood boil. Says that all this in-fighting and behaving as badly as Trump (as though they were on reality TV) has done them no favours and risks losing them the next election as he genuinely thinks Trump will get back in!!! As you can imagine, it was an interesting discussion. As I say, he is very politically-minded and can diplomatically debate with anyone. He actually once had a protracted discussion with his very conservative American grandma about why abortion should be legalized - and she said that although she could never agree with him it was lovely to have such a spirited (but respectful) discussion with her own grandson! Anyway, hopefully he and Lily will be on their flights out of Thailand tomorrow night. At the moment everything looks to be on track, thank goodness!

I think I might take a trip out to the grocery store tomorrow to get fresh stuff as long as there are no queues (with my attestation in case I get stopped)! If that fails, I'm good. I have no idea whether or not they have paper products or soap in stock (I suspect they will, although not as much as normal) but I'm good anyway. And then it occurred to me, when I ended up emptying out the farmhouse my ex abandoned in 2015 I gave all the decent linens/towels etc. to charity, keeping the tattier stuff in my spare bedroom to cut up for rags. Well five years later and I'm nowhere near through using it all up (he had a lot of stuff, as you can imagine). Whenever I'm cleaning I just cut up a few more rags and throw them afterwards but here I am five years later and I've hardly made a dent in my pile! Crikey. My mom always used to say you can tell "posh" people because they actually buy their rags instead of cutting up their old sheets. I guess we weren't posh then and I'm still not now 'cos those unposh rags are still going strong!

My friend is already having a hard time in isolation, it would seem, because yesterday he sent me a message to say "temperature 34° and I'm bored out my mind"! I knew it! He lives in a small apartment so I guess there's not much he can be doing around the house. He does a lot of consulting work on international trade law now he's retired but I guess that's not enough to keep him busy either right now. I mentioned that I had thought of inviting him over here to wait out the quarantine with me but then thought the better of it as I was afraid one of us might murder the other stuck in close quarters for too long! He pretended to be offended but we both know that's the truth. So in the meantime he's bored and I'm loving it! While I know there's an awful lot of unhappiness going to come out of this coronavirus madness, I'm also kinda hoping that maybe, just maybe, people might learn to slow down and enjoy the quieter things in life. Who knows. Certainly the basic goodness of some people is starting to show too. I saw today that two of the UK's top footballers are going to open up hotels that they own in the London area to be used by exhausted NHS (medical) workers free of charge so that they don't have to struggle to get home after long shifts! As I say, bad times bring out the worst in some people but also the best in others!

I also saw a couple of things on the net that tickled me too this morning. One young woman had been house-sitting for a family she didn't know and posted that while the house was lovely they had the weirdest soap ever - it didn't lather and was in fact very unpleasant to wash with. She found out later that they had left a chunk of cheese out near the sink by accident before going away and she had been washing her hands with it! 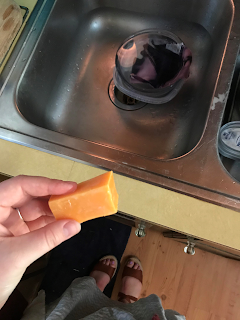 Then I read another story about an American couple travelling in Scotland who were absolutely rhapsodizing about the place - about everything, that is, except the soap they found in their room. They said it was grainy, didn't lather at all and left their hands scratched and blotchy. When they mentioned it to the hotel manager he burst out laughing as they'd been washing their hands with traditional Scottish shortbread! 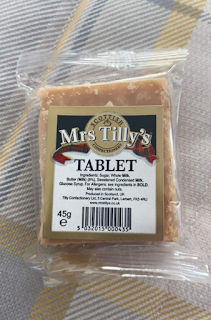 And finally, talking of "supplies" I just had to post this picture for Dave. Dave I saw this and thought of you. Hope your dogs are better behaved! 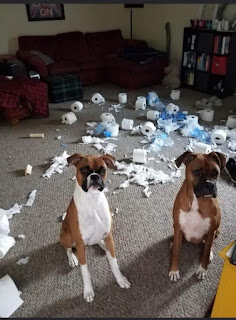