So on Thursday my friend and I met up in Geneva for a concert by the Strauss Festival Orchestra and Ballet Ensemble. And right from the start I loved it! I love Strauss's music and from the very first piece I was totally enthralled! I was somewhat surprised though to see that the theatre was only about two-thirds full - I really expected it to have sold out but that wasn't the case - which, I guess, is why I got the email offering me a 15% discount in the first place I suppose. Still, I'll take it! I used to get their programme of events sent to my work email, so after I retired I lost touch with much of what was going on in Geneva for a while. I suppose now, having since booked a few concerts using my private email address, I'll start receiving more regular updates.

They had a lady come on for about four songs singing opera - which I can take or leave frankly - but she did have a beautiful voice and was quite funny in some of her rôles. They also had dancers (as the name "Ballet Ensemble" suggests) and that I enjoyed very much, although to be honest I felt they didn't have that much room to dance. Towards the end of the evening they were playing a grand waltz when one of the male dancers walked on with a bottle of champagne which he was supposed to open and pour into several glasses. I didn't think for one minute that it was real but as he went to open the bottle the cork shot off and champagne (or some other fizzy stuff) spewed out all over the floor! I don't think that was supposed to happen somehow, but they were very professional and kept on going - although I was living in dread of one of them slipping in it! Thankfully that never happened!

The penultimate piece they played was The Blue Danube, which everyone recognizes and loves of course. But after that they played The Radetzky March for the grand finale and that was the piece that raised the roof! What I didn't know was that Johann Strauss Sr. wrote The Radetzky March and his son, Johann Strauss Jr. wrote The Blue Danube. Seems like there was just waaayyy too much talent in one family there don't you think!

Obviously this concert wasn't being filmed but since I love André Rieux I found a clip of his orchestra playing The Radetzky March (in Holland, im guessing, since they're all wearing orange). And guess what, I see that he's coming to Zurich in October and while my friend doesn't want to go, I have a friend who would like to go with me, assuming we can make the dates fit around his birthday celebrations! Damn, I hope Tony can make it!

I got up quite late this morning so got off to a slow start when I had been meaning to get some walking in. Around mid-day I was just thinking I couldn't be bothered to go out walking today when I looked on the 1,000 Mile website and saw that their motto was "boots on", so I thought sod it, "boots on", and here I go. The weather was glorious here today so there really was no excuse and I realize I need to seriously up my mileage if I'm going to achieve 1,000 miles in one year, as I'm nowhere near close to hitting the right daily target!  So I drove down the valley for about 30 minutes to a small leisure centre in the village of Thyez. Now my friend and I discovered this pretty little lake a few years ago when we went to a vide grenier (car boot/garage sale) there, but I hadn't realized that there is actually so much more there than just the lake/swimming area. There were kids playing football, tennis, basketball, a skateboard park, a ping pong table and of course the usual swings and slides for the younger kids. In fact, there is a more than decent riding/walking trail there which would make it a good place to go walking on days when the weather isn't so great and I don't want to walk in the mud. So I got in a 90 minute walk (minus the 15 minutes I spent chatting to a lady sitting on a bench - told you, I'll talk to anyone!) and got a few km in towards my total, but it's really nowhere near enough. So I'm hoping that as I get more consistent with my walking I can pick up the pace and the mileage, although from what I hear that gets easier once you take your hands out your pockets!!! Who would have thought! 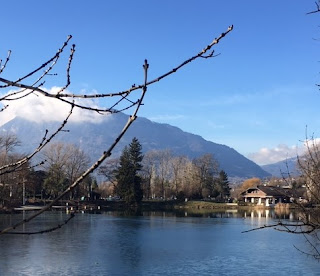