It's a small world isn't it!

I didn't get much walking in these past two days as it's been really foggy - too dangerous to be walking on the roads round here and pretty grim to boot! So I took the opportunity to drive back to Thonon this afternoon to take one of the sewing machines we bought for our club back to the seller as it's not sewing properly, but man was it hard going driving - a real "pea souper", as they say! So I'm glad I'm home now, and it's actually rather nice not having any plans tonight. I've just been sitting watching a couple of episodes of "Would I Lie To You" (Lee Mack was on fine form tonight), and eating some rather nice Algerian dates I bought from the market. For some weird reason I feel a bit like Cleopatra stuffing my face with dates - or could it be just because I'm sitting on my ass? Oh well, whatever!

And talking of feeling like Cleopatra, I went for a facial again this morning as part of my newly-decided-upon once-a-month treat. I still find it a bit weird being "spoilt" like this but I'm struggling along valiantly trying to get used to it! I kinda embarrassed myself again though as after much pummeling and prodding she applied a face mask then left me alone for ten minutes to relax while it dried. Trouble is, I'd had three cups of tea before I went out and was getting a bit desperate for a pee while I was supposed to be lying there "relaxing". Have you ever tried "relaxing" with a full bladder? Impossible right! So I decided I had no choice but to hop off the bed and run out to the loo - with no top on, greasy hair and a bright blue face! Which would have been okay I guess if no-one else had been there, but of course I just had to bump into a lady en route didn't I! Still, I guess we were all there for the same thing weren't we but damn if those cucumber slices didn't keep falling off! 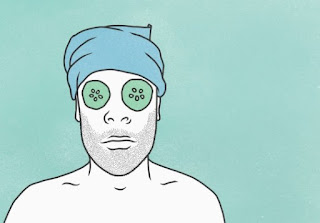 I saw in the news the other day that Princess Anne's oldest, Peter Phillips, is now cashing in on his royal credentials to plug milk in China, as is Diana's niece, Kitty Spencer, and Princess Michael of Kent (yep, that is the way she is referred to) is now also plugging some stem cell treatment centre in the Caribbean (they reckon that woman would go to the opening of an envelope if there was a free lunch involved)! And it would probably be easier to just draw up the short list of what Sarah Ferguson hasn't tried to plug using her royal connections! WTF!!!! So I suppose that's the route Harry and Megan will be taking - or will it be public speaking at how many thousands of ££££ a pop? Who knows, but really, who cares? Now I know there's good money in this kind of stuff but I'm forever amazed at the levels these people will stoop to when there are $$$$$ involved. I suppose they've all got their snouts in the trough in some way or another though haven't they. But the bigger idiots (in my humble opinion) are the "sheeple" that actually go out and buy this shit just because it's plugged by some celebrity (or celebrity wannabee). I mean, seriously, why would you go running out to buy some product just because it's being plugged by a Kardashian or some chinless wonder with protruding ears and a royal title? I suppose some of the lemmings are simply young and stupid, but I will never understand that kind of thing - but then again I don't suppose I'm part of their target audience anyway am I! I never would have been that dumb even when I was young (and probably stupid). It sure beats me though!

So where was I? Oh yes, "it's a small world". In her comment on yesterday's post Marksgran mentioned that her aunt had lived in Geneva and she knew it fairly well from having been a frequent visitor. She mentioned a small bakery in the old town and I'm pretty sure I know which one she's talking about. Then yesterday I saw an article about an attempted abduction of a 13 year old girl on her way to school in our local town of La Roche, so I posted a link to the article on Facebook. When I got back from Thonon this afternoon I opened up FB (I play Words with Friends quite a bit) and a lady from another FB group that I follow commented that her brother and a colleague's brother live in La Roche (this lady is French but lives in Texas). So yes, it would indeed seem to be a small world!

So that got me to thinking about a colleague who told me she was sunning herself on a beach in Crete many, many years ago with her boyfriend when all of a sudden she hears "Ello Janet, what are you doin' 'ere?" spoken with the very thick Wigan accent of a colleague of ours!

Then when I was doing my six-month "round Australia" backpacking trip when I was 24 I stopped off in Bali on the way over. Being on my own I didn't go out much at night but did end up going out to what I thought was "dinner" with a bunch of "older" Australian ladies (in their 50s I reckon so "ancient" to me at the time) when I realized that they weren't really interested in "dinner" so much as picking up young Balinese men (and paying for their "favours", if you get what I mean)! I was young, naive and horrified, so you can imagine my relief when a young European put me out of my misery and started chatting to me. Turns out he was Swiss, was from a place called Buochs (as was my boss), and guess what - his uncle was my boss! Again, what a small world, right?

And during my wonderful trip round Australia I met a young man called Jim in Darwin (God what a humid hellhole that was), and one day we got talking to an older lady who was working out in the desert doing some kind of research into earthquakes and earth tremors (or something like that, you can see how well I listened can't you). She was a fascinating lady to talk to and when I told her I worked in Switzerland at Organization XX she said "oh I know that building. Beautiful isn't it! In fact, I used to work there when it was the ILO (International Labour Organisation)! So fancy meeting a lady in the middle of the desert in Australia who was probably a previous occupant of my office (and may even have carved her initials into my desk - nah, I doubt that bit)!

Which makes me think, I have to think about writing about my six month trip around Australia at some point. I had a blast but I have hardly any photos because I got hit by a car on a pedestrian crossing fairly early in my trip and while I was unhurt my pretty expensive camera bit the dust as a result (something I only found out later). So yep, I guess I'll have to start dredging my brain for memories of that trip before it all disappears in a blur - or maybe not eh. Then again, maybe I will. I guess I'll be dead by the time my kids get around to reading this blog (if ever) so maybe I'll just go for it and to hell with it! Kids, take up any issues you have with my ghost when I come back to haunt you will you!