So what's new here at the moment? Not an awful lot really I suppose. Life is just ticking along nicely and the weather is still glorious, if cold, but then it is winter isn't it! We had rain on Friday which stopped me going out walking. Well I guess that's not strictly true because I could have just put on a different coat couldn't I, but if I'm honest I couldn't be arsed and I'm fine with that! While I'm enjoying the walking and have been pretty consistent with it, if I don't go out for some reason that's also fine. Saturday was again really sunny, but what I hadn't realized was that the rain from the previous day had actually caused black ice to form in certain areas and on two occasions my car went into a bit of a skid coming back from the market. I wasn't going fast of course, and I do have my winter tyres on, but it is a weird feeling all the same. Thankfully I had been able to pick my own car back up from the garage after they had spent most of the week repairing the damage caused by the wild boar. Turns out there was more damage than we originally thought which was not immediately visible from the outside, but the guy showed me pictures of where the internal damage had been done and it ended up costing €1,900 (that's about $2,100 at the moment). Thankfully I only had to pay €350 out of pocket, with the insurance picking up the tab for the rest. Thank goodness for that! Actually just looking at that exchange rate conversion I see that the euro is going down against the Swiss franc, or more likely the Swiss franc is going up (well that's what it looks like to me when I look at the Swiss franc/US$ exchange rate). That's all good for me as my pension is in Swiss francs and gives me more bang for my buck when I switch it into euros. I don't even want to look at what the GB£ is doing - it's probably losing points against the Matabele bongo bean as we speak thanks to Brexit but …. nah, everything is going to be just f-i-n-e if you just listen to Bojo! We'll see!

And talking of the economy, I see that the big boss was on TV with Trump in Davos today. I haven't had time to read the transcript of the interview but it could be interesting (to me at least)!

So where was I? Oh yes, routine. After yoga on Monday morning I headed out to a new-to-me spot to try to get some walking in, and it wasn't bad at all. Not as picturesque as many places but it is just down the road and for the most part easy walking - well I managed to get 9 km in that day so it can't have been that bad can it! 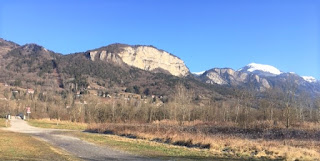 In fact, I was just looking at my walking totals and since 2 January I have logged 94 km (or 58.5 miles), all mileage that I wouldn't have done if I hadn't signed up for the walking challenge. So maybe that's what I need - an accountability incentive! I'm just barely on track to making the 1,000 miles in one year, and it will mean really upping my walking on days when I do walk because there are obviously going to be days when I can't, but I'm a stubborn bugger and I have to admit I'm quite enjoying it! I had a fitbit but that suddenly stopped charging and since I didn't want to buy another one I just bought myself a cheap pedometer to wear round my neck, given that I wasn't carrying my phone on me half the time. It's funny though but I noticed on my phone that it was tracking all kinds of weird things, one of which was called "cycle tracking", so I though, "oh great, if I decide to go out bike riding that might be useful". Stupid sod I am sometimes, because when I looked closer at it it can apparently tell when I'm ovulating (on a bike?). Ha, as if! I swear my kids would just shake their heads sometimes!

I also gave myself a good talking to today and got my act together enough to drive in to Geneva to use the gym at work (it's quite a trek and can be a pain in the butt if the traffic is bad). But as I was walking down from the car park I realized that I actually miss walking along the lake front or in the botanic gardens. It's so peaceful and yep, I kinda miss it. So I think I may start taking myself off down to Lake Annecy and start walking down there instead. I actually find Lake Annecy prettier than Lake Geneva so I can only think it will be good to go down there to walk and I'll still get that lovely "sea air" smell!

And finally, on Sunday I talked my friend into driving into Geneva to see Knives Out and it was pretty good. Daniel Craig's "southern" accent was a bit hard to take but then I think it was played for comedic effect. In fact the whole film was pretty funny and we both enjoyed it. Without giving too much away, there was one scene that involved someone leaving a message using "invisible ink", so as we were walking out I asked my friend if a spy was using invisible ink to leave a message how would he know when his pen was empty? He just looked at me like I was mad! Then I told him that tomorrow night I'm going with friends to see a tribute to the Bee Gees in Geneva and he asked me if it was the original group! Considering that three of the four brothers are dead I told him I thought that was highly unlikely don't you! So touché then!