As I was getting ready to go out for my walk yesterday my neighbour's daughter called out to me that she had my son, Jordan's, scarf in her car. She and her soon-to-be husband moved into a house they bought together on 20 December and on Sunday Ben, the fiancé, decided he was going to do some DIY to fix a dripping toilet cistern. Trouble is, he soon came unstuck and so decided he would run out to the DIY store to buy what he needed. Oh his faith is touching! Ya see Ben is English and he foolishly thought he could just run down to the store on a Sunday - like you do back home right? Wrong! This is France and mad as it sounds none of those stores are open on a Sunday. The garden centre just might be open on a Sunday morning if you're lucky, but anything else forget it! I always said if I was going to run a store here it would be either a garden centre or a DIY store and I'd make sure to have it open on Sundays because that's when people have the time and the inclination to shop! Now I know much of this is down to France's highly restrictive labour laws but still … Anyway, it left Ben in a bit of a mess, "the trickle" having turned into a veritable "flood" by all accounts, so Mathilde did what any sane person would do and called my son, the plumber. As luck would have it he was home on Sunday so he went over there and sorted it out for them, and that's how he ended up leaving his scarf at her place!

So today I thought I would take a trip out to a small fishing lake about 5 km from here and take a walk round it to keep accumulating my km! I called Jordan and said I would drop off his scarf if they were going to be in and while I was there chatting with them I asked Jen for any nice, easy walks around St. Jeoire that didn't involve going up into the mountains, as I don't want to get caught up in all the skiing traffic! I had seen one walk not too far away and since Jordan drives all over Haute Savoie with his job he was able to explain to me how to get there. But then Jen suggested I might like a walk around the Lac de la Tour/Lac du Môle, which is only about 2 km from their place. So with that she decided she would like to come with me. I'm not too sure how enthusiastic Jordan was but he came anyway, and although the lake is very small it was a lovely walk all the way round. And here's where the "blind faith" in the post title comes into it. I had figured it might get pretty cold today (it didn't as it turned out) so I had to have blind faith that I wouldn't slip on the ice and break a leg because I had put on a tatty pair of old long johns that had belonged to my ex underneath my sweat pants! You know what your mom says about always wearing clean underwear - well these long johns were exactly what would have horrified your mom! Anyway, as luck would have it, the temperature stayed above freezing and we were able to have a nice stroll around the lake, followed by a trip up nearer to where they used to live to wander round a ruined château that had been built in the 1300s and which had a spectacular view over the Arve valley. 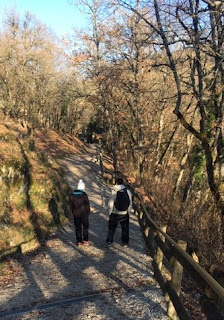 It was interesting listening to the kids talking about their future plans though. Their apartment is small but very sunny and while I was thinking they would pay it off as quickly as possible and then move to a house, they are talking about keeping it for a few years and then buying a house but renting out the apartment. Makes sense actually, because my thoughts for them and their retirement is to become landlords rather than putting their faith in a French pension, which is pitifully small and only likely to get worse! They're both adamant (Jordan more so than Jen actually) that this is where they want to remain as they both love the region and, as Jordan says, I have everything I could ever want here, and while we don't have the ocean we have enough lakes to make up for it! And he's right! It's nice to see that they are both so grounded though!

Anyway, as I dropped them back home Jen mentioned another lovely spot in the mountains that I might like where there are two small lakes you can walk round. So she ended up suggesting that if the weather is good next Sunday we all head up there for a hike. Wow, this walking business could be catching on then! I was also pleased to hear Jen say that she has given up smoking. It's early days yet but good on her. So I told her I was doing Dry January (although I actually started on 26 December) so I reckon with this and the walking challenge we could all end up uber fit by next December!

Anyway, around 4 p.m. I headed off towards home but stopped on the way to check out the lakes I had initially intended to walk around. In fact, as yoga starts again first thing tomorrow morning I might head out to these lakes right afterwards for a quick walk as it's supposed to be nice this week also. Then when I got home I saw on my FB feed that just after I had left them a 15 km tailback had developped on that road with all the skiers heading back from their Sunday afternoon skiing, so I reckon I got out just in time!

And on a totally different subject - or as my neighbour would say "jumping from the rooster to the donkey again" - my mind was drawn back to an event that took place in 1967. I know, I know, trying to corral my thoughts is like trying to herd cats. Anyway, on the "1,000 Miles A Year" FB page, someone posted photos of his walk this morning across Cannock Chase in England. And that is what made my mind jump back to 1967 (although I had to look the exact year up, to be honest). You see in 1966 two little girls, aged five and six, were abducted (separately) from the Birmingham area and subsequently murdered, with their bodies being dumped on Cannock Chase. Then, in 1967, seven year old Christine Darby was also abducted from the same area and her body was also found on Cannock Chase. The only lead police had to go on was that they were looking for a grey Austin A55 (I think). So one day, in August 1967, my mom and dad decided to take us out for the day (though I'm not sure where we were headed) and we ended up driving across Cannock Chase. And guess what car my dad was driving? Yep, you guessed it, a grey Austin A55! Anyway, we were pulled over by the police (I remember being terrified) and the officer wanted to ask my dad a few questions. "Can you tell me where you were on August 5th?" Of course my dad couldn't (I mean, who could really?) so my sister piped up from the back and said "I know. It was my birthday and we did such and such"! True! So then the officer asked my dad what his registration number was (licence plate) and my dad again said he didn't know. Now I was still only eight years old at the time but I piped up from the back seat "353 HOP"! And I was right!!! And the only reason I knew it was because it rhymed! Funny how over 50 years later I can still remember that licence number! A man named Raymond Morris was eventually arrested and convicted of the girls' murders and sentenced to 42 years in prison where, I believe, he has since died. Many years later we actually saw that car driving round Birmingham and my dad said it was the best car he had ever owned. Tragic as that situation was, I don't think my dad had ever been so glad to have his two little girls in the car with him that day!