I was "blog hopping" the other day and one of the bloggers mentioned the UK-based "Walk 1,000 Miles" group, so I went over and had a look - and now I'm inspired! I only bloody went and signed up didn't I! I must be mad, or maybe it's just new year's enthusiasm! I feel I just can't keep telling myself "oh you must get out and walk" and then do nothing about it although, to be fair, I've already been out walking three times since 1 January for about an hour at a time. I know this is a UK-based group and they of course can benefit from plotting their walks using UK ordnance survey maps, and joining up with other walkers, whereas I can't, but they seem such a nice, encouraging group so I went and signed up for the challenge! The idea, as the name suggests, is to walk 1,000 miles in one year, or in this case, in 2020! Or in fact, in one year from whenever you decide to start. Or walk less if you want to. Basically it's up to you, but the aim of the group, as I see it, is to encourage people to get out and get walking!

I think one of my biggest problems was always doing walks round here and not driving a little ways out to different routes, which is kinda silly actually as I don't mind driving at all. So with that in mind this morning I drove about 15 minutes up the mountain behind my house to a small ski resort called Orange. Technically it is part of my village but being further up the mountain we don't really "connect". And when I say "small" ski resort, I mean small. It really is for very young children to ski and for those that might want to do a bit of cross country skiing or luging. Not today though as there was no snow, but I suppose it'll arrive soon enough. 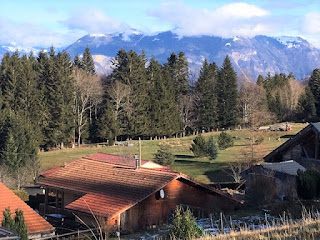 Obviously, since I have no physical disabilities, walking 1,000 miles in one year shouldn't be that difficult, I mean it works out to only 2.74 miles a day, or 4.4 km in my case. The problem as I see it is that for three months of the year we will be ankle deep in snow, and then for about two months of the year I just want to lie under a stone to escape the heat, so I guess that means that in order to compensate for those times I will have to go on some fairly long walks on the good days! We'll see how long the enthusiasm lasts but I know I have never regretted going out for a walk once I've made the effort to get out the door! Well I almost regretted it today as a ruddy great German shepherd was roaming around up at Orange, chasing after the one or two cars on the road with not an owner in sight. One guy drove all through the village slamming on his brakes and honking his horn trying to get rid of it. I hung back at my car for a while to see what the dog was like and if I needed to jump back into my car for protection. I wish people would keep their bloody dogs in their gardens!! While I like dogs I don't like being lunged at by a ruddy great dog, jumped all over with their muddy paws and in any case, some people, strangely enough, actually don't like dogs, if you can believe it. Anyway, as I set off further up the mountain I heard the car driver giving the dog's owner (who had obviously just let it out "for a roam") a mouthful and telling her to keep the bloody thing locked up. Good for you mate!

As it started to cloud over and turn cold I headed back home after about 90 minutes to have lunch, but when I looked at how many (few) km I  had done I was disappointed, so decided I had to go out again round the back of my housing plan to clock up a few more km. And wouldn't you know, another bloody dog came lunging and barking at me as I walked up the road. Now this particular dog has done it to me before (it's never fenced in) so I had the foresight to take my walking stick this time just in case. While I didn't need it for protection, luckily, I do think some dog owners need locking up more than their dogs do!

On the "trying out new recipes" front, I've been pretty good about that, although I'm rather disappointed so far. I succeeded in making the cheesecake that called for condensed milk, and while it tasted very nice it didn't set solid enough (they said this would be the case) so I won't be making that again. Then I made a potato and courgette rösti which turned out rather bleh, so another no-no. After that a crab chowder which was okay and I'm making stir-fried chicken and broccoli tonight using a lovely marinade I found on Mavis' blog over at $100 A Month! That one was a winner, thankfully!

And talking of recipes, as I'm putting my books back on the bookshelf in my living room I'm taking the time to go through them and decide if I should keep or donate them. But I found a Martha Stewart book/magazine which was God-knows how old. I tell ya, if you ever want a magazine that contains 100 pages, of which 50 are advertising, I've got a magazine you can have! Bloody hell, I've no idea why I bought it (I threw it in the bin), but I guess now I know why I don't buy glossy magazines any more. All that advertising!

And finally, for Northern Living Allowance, if you read this, I've tried to comment on your blog a few times with no luck, so I guess you have the same problem I do sometimes - people's comments just don't go through, even allowing for the fact that you have "comment moderation" on. Just thought you might want to know - I'm not ignoring you. And well done you on buying all the gear for your new fitness regime! Now we both have to keep at it don't we!