No, no, not Scooby, the indefatigable canine member of that 1970s private investigators' team, but scoby, a yeast and bacteria culture needed to make kombucha! I'm in the process of making one - well, at least, I hope I am - I'll know for sure in about four weeks, I guess!

Pretty gruesome looking isn't it! And I guess this is the point where my juvenile mind goes racing off on a tangent to another gruesome encounter of the bacterial kind! I remember when I was pregnant with my first son I was working at the World Bank and my medical insurance covered Lamaze pre-birthing classes. Now frankly I didn't find these particularly helpful (as it turned out, you can't daintily "pant" your way past the pain of pushing something the size of a basketball out your rear end), but it was very helpful in teaching about the various stages of labour and delivery and what might happen. One of the things that the very competent Lamaze lady told us was that in many cases before labour begins you might "lose the mucus plug" ahead of time - not always, but fairly often, she said. So she told us what to look out for and said that would probably be a good time to call the hospital for advice. I had to laugh when someone asked exactly what this "mucus plug" looked like and the lady said "well not to put too fine a point on it, but it looks like you blew your nose in your underwear" - and we all burst out laughing (and I still remember that 32 years later)! Still, it was a good thing she mentioned this because I actually lost mine with my second son three weeks before I went into labour and not, as my mom had said would happen, gone into labour within 24 hours. Had the Lamaze lady not described "the plug" I might have thought I'd given birth to a jelly fish!

Anyway, back to the plot. I mentioned in a previous post that I had decided to do "Dry January", not from the "giving up booze" point of view really but because I thought it might help me lose a few pounds. Well I actually "gave up" on 26 December and it's been a doddle so far, haven't missed the white wine at all oddly enough, but I have been a bit stumped as to what to drink instead. I don't like coke and all those sweet drinks so when I stumbled upon kombucha I realized I had hit pay dirt. Or maybe I just picked up a really good brand because I found it tasted a bit like cider and was really refreshing. Trouble is, at over €5 a bottle it is also quite expensive, so I decided to "Youtube" it and look up how to make my own, having been impressed seeing my friend messing around with her concoction when I went to visit recently. It seems the first thing you have to do is make a scoby (which actually isn't all that difficult but which can take anywhere from one to four weeks to grow), so that's the stage I'm at. Think I'll call mine Shaggy! Well "Shaggy" is now sitting in the dark in my spare bedroom and hopefully keeping just warm enough to grow into a real scoby. Will let you know how it pans out in a couple of weeks.

Anyway, while I was in the health food shop yesterday buying my kombucha I saw a couple of Brits trying to "mime" to the young assistant that they were looking for turmeric! Now how you "mime" the word "turmeric" beats me, unless you paint yourself yellowy-orange and put on the sari you just happen to have handy, so I went over and asked if I could help, much to their relief. ("Turmeric" is "curcuma" in French, just in case you're ever caught short!). But that incident got my mind wandering on my drive home about other daft things people have done while trying to communicate across the Tower of Babel (myself included of course, I've come out with some howlers). But one of the first incidents that popped into my mind was when our neighbours back in Birmingham had gone on a camping holiday to France many, many years ago. While they were there their eldest daughter started her periods for the first time and was in a lot of pain. Mom didn't want to leave her and their younger daughter alone so sent her non-French-speaking husband into town to buy sanitary towels. Well poor Norman obviously ended up in a right state as none of the assistants in the pharmacy spoke English. Turns out he ended up drawing one on a sheet of paper - and then they got it!!! My mom always used to double up when she told that story!

And when I flew out to Bulgaria to meet up with my old childhood friend in 2010, we were travelling round the country in his clapped out Postman Pat van and ended up staying in what were some fairly basic, Soviet-era campsites. And I mean basic! Very poor facilities and hardly anything in the way of grocery stores or other amenities. Anyway one day Ian decided that we'd have omelette for dinner but realized he didn't have any eggs, so off he trotted to the little (in)convenience store to get some. We had learned Russian at school 10 trillion years previously and he had been getting by with a few words of Russian during his time in Bulgaria but completely blanked when he walked in the store and couldn't see any eggs on display. When he did indeed come back with a dozen eggs I asked him how he'd managed that, so he did a rather impressive impersonation of a hen laying what was apparently a square egg and the elderly babushka in the store got it straight away! Oh happy days!

Which leads me off on another tangent of course. I'm still in the process of putting my books back on the shelves in the living room after having moved them all when my new floor was laid. Trouble is, I can't just put them all back, I have to look at each one and decide if I want to keep it, if it's too tatty and I want to throw it, or if I want to donate it. So to that end I now have a huge pile of books stacked on my coffee table in the TV room and also on the arm rests of the sofa where I sit watching TV, all waiting to have their fate decided. So if on the off chance I ever disappear from the ethernet please get the avalanche tracking dogs to come sniffing under the pile of books on my sofa 'cos there's a good chance I'll be buried alive under it! But, just today I opened a Delia Smith cookery book that my ex had taken with him when he moved out - and when I opened it I found a letter from him to me, saying how much he missed me now that I "wasn't there"! Well of course I "wasn't there" you idiot, you cheated on me and moved out. Still, it bothered me a bit as there was a sentimental side to him, although since the gf had cheated on him at this point I suspect he was just feeling a bit lonely. Still, it's weird to find something like that (it's not the first time) five years after he moved back to the States and all his stuff ended up dumped in my basement! But just to show how much I must have had my finger on the pulse of current events even then, I also found this book that I bought before I was married (so pre-1985): 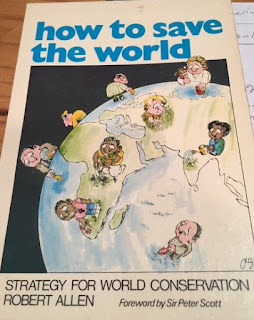 So ya see, I was obviously way ahead of Greta Thunberg (well, she hadn't actually been born at that point but let's not split hairs shall we), and I can see that the environment/conservation/recycling has always been something that's interested me. But if you want a bigger laugh, around the same time I must have also bought this: 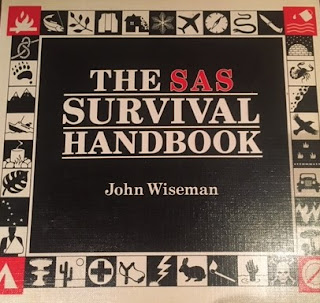 So again the same kinds of interest, but considering I live just 45 minutes from Geneva airport and hardly in the back of beyond, I don't think Bear Grylls has much to worry about do you!
Posted by Treaders at 20:00