Well I made it through a pretty hectic week this week but even though it was pleasurable I wouldn't want every week to be so jam-packed. Circumstances, I guess! I'm still trying to work in a few extra km walking every day and I have been doing well, even if I'm not really achieving great mileage. I guess what I mean is that if I hadn't signed up for the 1,000 mile challenge I would have just slobbed around at home, but I have made an effort to get out walking every day even if I'm not getting the mileage I would like. Still, it's better than nothing I guess!

On Tuesday I walked up to the Mairie to pick up attestations for Jordan and me regarding our length of residence in France. My attestation states that I moved into the village in April 1990 and am still resident here, while for Jordan she did one saying he had lived in the village from birth until October 2015 (when he moved in with Jen). After that I guess he can get attestations from his next villages for when he requests residency after Brexit. Instead of going straight home from the Mairie I decided to walk back in a loop through the woods at la Bénite Fontaine church and home past Stan's old shop - which got me an hour's walk in and about 5,000 steps. Stan is my Nigerian friend who used to have his little bar/shop near the railway line in the village but who retired about 18 months ago and now lives mainly in Nigeria but comes back to France on a regular basis to see his wife and grown up kids. Anyway, just as I was approaching his old shop, who should pop out of the group of men at the mobile still (turning walnuts into eau de vie) but Stan! Turns out he's back from Nigeria for a couple of months and it was great to see him! 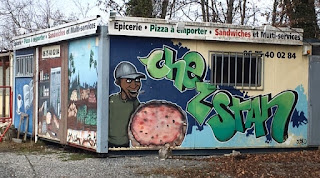 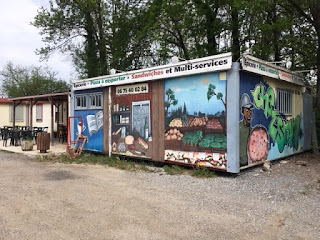 It was so lovely to see him and have a chat. He is back here until end February and in a couple of years' time his (French) wife will retire and join him, splitting her time between France and Nigeria. While I was chatting with him I noticed the farmer was in among the group of men chatting next to the still and he just gave me a smile and that was it. But you know, I'm not the only one to have really missed Stan's place. We have one restaurant in the village and nothing else, so not having somewhere for people to meet up for a chat is a real loss.

Oddly enough, I was chatting to my neighbour this morning and I mentioned that Stan was back. So she told me that she had seen one of his sons over Christmas and - get this - Sam has taken Nigerian citizenship (in addition to his French citizenship) and will, we think, be representing Nigeria in the winter Olympics in the cross-country skiing! Since it seems he will be a one-man team he will also be the flag-carrier apparently! And I think that's wonderful! All three of Stan's kids are athletic. In fact, they pushed their kids into sport as a way to deal with the fact that they are mixed race and have been on the receiving end of racism on occasion. Daniel plays rugby for Toulouse and has also played for France in the under 21s. Cécile has played handball for France and is a sports teacher in Montpellier, and Sam was on track for possible selection for France in cross-country skiing when he fell and broke his shoulder - thus putting paid to his dreams of representing France. He works as a ski moniteur and, hopefully, will now get to represent Nigeria in his chosen sport!

Then on Tuesday we started up our Tuesday afternoon yoga again, this time with my Monday morning teacher standing in as a replacement for the Tuesday teacher, who couldn't make it. So now I think my neighbour is totally sold on the Monday teacher - I told her she would prefer her - and she is going to look into coming to Monday morning yoga with me in future if possible because she loved the way this replacement teacher taught our class! Knew it! Then on Tuesday evening I had my first patchwork lesson of the year (thankfully only once a month as it can get too much), and this time we're doing a small project that won't take up as much time as my as yet unfinished Kaffee Fassett quilt. While I'm honestly not very good at it I continue to enjoy it and am still learning so much!

Then on Wednesday I had to talk myself into driving in to work to use the gym there, but I did it in the end, even if it wasn't exactly a hard work-out. I always hesitate to drive in to Geneva because of the traffic and because I have to cross back over to the other side of the lake for my Italian class, which also started back up this week. It all worked out well in the end, and the class is moving along at a fair old pace, but then that suits me as I don't like lessons that to my mind move too slowly. I took some truffles that I had bought over Christmas and then the Polish lady in our group showed up with panettone as she had just come back from Italy! Crikey, it's a good thing I signed up for the 1,000 miles walking group isn't it!

On Thursday it was back to pilates also, and I sense she is moving it up a notch as it was quite a bit tougher - or maybe I was just three weeks out from doing any kind of exercise, I don't know. I managed to fit in a hair appointment before heading back to Geneva for the Strauss concert in the evening (more on that in another post) but by golly I ache this week!

Today was the day I was supposed to try out snow-shoeing with a friend but the weather turned to rain (so snowing in the mountain) and we decided to give it a miss. But I knew I should try to get out anyway, so took myself off for a one hour walk around our town, but avoiding the woods because of all the mud. Trouble is, just down the road a golden retriever was running loose and he decided he would accompany me - which wouldn't have been a bad thing except the bloody thing kept dashing into the road and into oncoming traffic! One guy yelled at me to put my dog on a leash - so I yelled back that I would bear that in mind if I ever got one! Actually I know who this dog belongs to but (a) I didn't have anything to attach to his collar to get him under control, and (b) it's not my responsibility anyway! It's a shame actually because it is a sweet dog but I fear it'll end up getting killed or at the very least injured if they don't keep him in!

Turns out he actually belongs to a neighbour of Stan's. The wife had been married before and had three kids, and then remarried and had four kids with the current husband. I remember going for a coffee at Stan's one time and you could cut the atmosphere with a knife. Apparently her youngest kid was making a nuisance of himself at Stan's, banging on the display cabinets, opening the freezers and messing around, when Stan balled him and his friend out - and then balled the mother out. Quite rightly, I think, he told her that if she wasn't prepared to discipline her kids then he would - and I agreed with him. Her reply was that "he's only six", but as Stan said, "and one day he will be 15 and you still won't be able to control him". This was the little sod who was coming into my back garden and breaking/stealing my garden ornaments. One lady found him taking stuff from her garage and another found him in her house when she left her door open for a few minutes! And as Stan said, what can be forgiven of a six year old is not funny when he is pulling the same shit as a 15 year old! In fact, he is the reason I put the side gate in to block access to my back garden, as I didn't want him coming onto my property. Stan told me that most of her kids have been given "special needs" status - for which she gets an allowance, but he said she needs to start parenting these kids, giving them stability and discipline, rather than drugging them up to keep them docile! Just his opinion but I tend to agree with him as her older kids are so spaced out on medication it's sad to see! She's on to a pretty good thing actually because the allowances she gets for these kids are pretty generous. So generous, in fact, that she was telling everyone at Stan's one time that she had "retired" at age 42! One of the men just laughed and said "no, you just quit your job to live off the State" and she didn't like it one bit! This is all the more weird actually because one time when I was taking stuff down to the food bank shortly after she quit her job I actually bumped into her picking up food. After that I started going down later to deliver stuff as I didn't want to bump into people I might know!

Anyway, it turns out that she recently buggered off and left her husband and their four kids for another man (the youngest kid - the little "monster" - would be about 10 now I guess). Said husband is now (apparently) drinking himself to an early death, and hence the dog no longer gets walked but is just allowed to roam free (until he gets hit by a car I suppose). Talk about living in Peyton Place!

Anyway, on the cooking side and trying out new recipes, I tried a new (to me) lasagna recipe from the blog "Good Cheap Eats" and I really liked it. I don't really make lasagna since the kids moved out but thought I would give it a shot and I like it as it's less runny than my recipe and quite tasty. So score then!

I also managed to get a bit of cleaning done today too while having all the windows open, and changed the bed. And that's got to be one of life's joys - getting into a clean bed in a bedroom that has been properly aired. Absolute bliss!
Posted by Treaders at 18:36