Damn, I just wrote a whole blog post and new blogger seems to have shot it off into cyberspace somewhere! Oh well, here we go again then! So as I was saying before I was so rudely interrupted, sometimes I'm really glad we're six hours ahead of eastern U.S. time so that I had no inclination whatsoever to watch any of the RNC. I did manage five minutes of Trump's excruciating monotone monologue before the temptation to throw myself under a bus kicked in, but politics aside, given that there were several hundred unmasked, untested and non-socially distanced spectators I'll be curious to see if "this whole pandemic is a hoax" still holds water in about a week's time! I suspect not!

And what the hell happened in Kenosha? The idea that a 17 year old (or anyone outside the military frankly) can get their hands on a semi-automatic, walk casually down the street and kill someone with it just blows my mind. The sad thing - apart from the deaths and injuries he caused - is I wonder if he has spent half his life playing video games and thinks he finally "got to star in his own video" - you know, the kind where you can just buy a new life and start over if you get killed! Talk about not only destroying several other people's lives but also your own. I just wonder if he sleep-walked through the whole shit show in some kind of make-believe zombie mode! But to the people calling him a "hero", in what kind of alternate perverted universe does killing two people and blowing someone else's arm off make him a "hero"? Sadly, whoever wins in November, I think this kind of rioting and violence is far from over!

In more uplifting news, today was André's birthday and while the weather didn't hold for them to go go-karting, I at least got to eat out with the three of them at a lovely restaurant next to the Lac de la Tour. And the restaurant was heaving, which on the face of it isn't good, but the place was so big that we were, indeed, able to keep our distance from other diners. Not great maybe but I actually feel that as much as possible France needs to start returning to some kind of normality. That being said, Germany and France have again warned today that due to a spike in infections it might be necessary to envisage new lock downs in the future. I guess only time will tell!

Talking of France, I have my rescheduled French test in respect of my citizenship request on Thursday. I haven't been particularly worried about it but did think maybe I should do a couple of trial runs these last few days and I'm glad I did. Oddly enough the questions I'm most likely to fail are the aural comprehension ones - which is stupid because I can understand everything they say. The problem is that as you get further along in the test and on to the more difficult "accents", many of the answers, to my mind, are ambiguous. So "is this conversation discussing women setting up a business in Morocco or does it highlight the difficulties women face in a patriarchal society such as Morocco?" That kind of thing. So today, when I came back from lunch, I did another trial test. When I got to the end and looked at my score I had only got 32 out of 40 - which struck me as very odd because I've never scored that low. But that was when I realized that I had lost my internet connection on question nine and apparently the computer then decided to mark the first eight questions as "unanswered" and therefore wrong! Phew! Still, even with that score it was sufficient to pass the test. I'll be glad when it's over though as I need to get back to learning "all about France" just on the off chance I ever get an interview. Add to that the selfish bastards have changed half their government ministers since the Prime Minister's resignation so I've got to go through and learn the names of the most relevant ministers yet again. Nah, not really. I think from the naturalization point of view there are only three or four "important" ministers, such as who is the Minister for Europe? (Jean-Yves Le Drian, if you're interested)!

I'm also making headway through the pile of books I've had sitting on my coffee table for the last however many decades. The other day I picked up one by Stephen Fry and was only "cautiously optimistic" about it. I eventually gave up on the last book of his I tried reading because while I think Fry is hilarious the book was just way too pompous. This one is called Mrs. Fry's Diaries, supposedly written by the entirely fictitious Mrs. Stephen Fry (given that he's gay and is married to a much younger man) and their supposed family life with six kids on a council estate. And it's actually pretty good, I have to say. There are such gems as how Mrs. Winton "told me all about this new Reiki fortune teller she's just started seeing. First she gives you an intense scalp massage, then she reads your dandruff"! Another one has Mrs. Fry talking about a day out at Aintree (the biggest horse race in the country) where Stephen was pointing out the winners' enclosure "right next to the royal box", and the losers' enclosure "right next to the glue factory"! Fry is very drôle and I can just hear him in my head coming out with this lunacy in his posh, Cambridge-educated voice. Either way, it's easy reading and I'm quite enjoying it!

And finally, white van man. I had an encounter with white van man at the supermarket on Thursday. As I was getting out of my car, white van man came running over to me and asked if I "had any spare coins so that they could get out of here". I'm always a bit surprised by this kind of thing so I just said no. Then when I was leaving the supermarket I saw him leaving the cash register with the lady just having given him change for what looked like a €50 note (or at least he had two twenties in his hand). So I loaded up my car and just as I was about to leave another white van man pulled up diagonally behind me, thus effectively blocking me in as there was a car in front of me and one to my right. He wound the window down and asked if my car was for sale, which is odd as there's nothing special about it - it's just a well-maintained nine year old Ford Mondeo. When I told him no, he nevertheless continued to sit there for a couple of minutes, effectively preventing me from leaving! What the flip??? Eventually he moved off but as I was driving out of the parking lot I noticed the original white van pulled over on the side of the road and when I passed him he also went to pull out and swore rather loudly. Now I've no idea what was going on there. I reckon they were gypsies actually, but a few years ago my friend received 21 speeding tickets in the space of about three months, and this after having lived in France for over 25 years and never having got a ticket. So I'm leery, as you can imagine. In her case she's pretty sure someone with the same make of car had duplicate plates made (although sadly she couldn't prove it). She could prove one time when she was supposed to have been speeding near the border that she was actually on the other side of Geneva at a doctor's appointment, but to be honest the French courts didn't want to know. It was a very stressful time for her so I'm very aware of my gut feeling that these guys were up to no good. I hope I'm wrong but .... One thing's for sure, if I do start getting speeding tickets I will contest every one as and when. My friend didn't do this immediately because she genuinely thought she'd made an honest mistake the first couple of times, but by the time she'd hit 21 tickets it was already too late to contest them. I rather hope I'm wrong and that white van man number one was just a gypo trying to scam money out of me, and white van man number two was maybe looking for spare parts! Actually, that's one of the reasons I wanted to write this post - so I have the "white van man" incident documented on 27 August. I hope it doesn't come to anything other than my perhaps overly fertile imagination though! 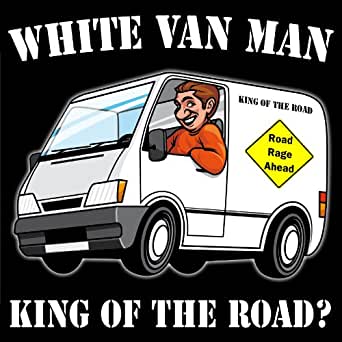