Well that was rather good!

There's not been an awful lot going on here again at the moment. The weather dropped to 28°C today so it was again bearable. I think they're predicting rain later in the week, I guess as a follow-on from the storm currently hammering Britain and Ireland. I can't say it bothers me one way or the other because I can always find things to do, whether it be in the garden or inside. I've worked a few hours in the garden these last few days putting stuff "to bed" so to speak. The veggie plot wasn't that great, although the tomatoes are looking good, and the peach tree is heaving with peaches. I just need them to ripen before the wasps get them all. Once I'd finished for the day I pushed myself to take one of my local walks down to the Bénite Fontaine. It's convenient because I don't have to take the car and I realize, since there's a little bit of climbing, that I need to get back to doing something slightly more strenuous than just walking on the flat. You have to walk down into the dell where the holy water spring is and then climb back out to the church. Nothing much - I mean seriously only about 10 minutes of climbing - but I realize I need to get back to challenging myself a bit more now that it's cooler. When I stopped to fill my water bottle I noticed that a family had brought their cars down into the dell, while another lady was sitting at a picnic table in the shade on her own. I must admit I had never thought of bringing a car down there, but it allowed the family to bring grandma and any number of coolers for a picnic in what is a rather lovely spot! 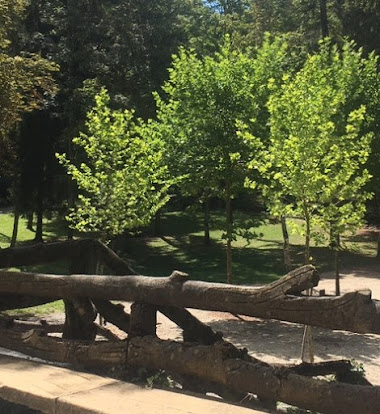 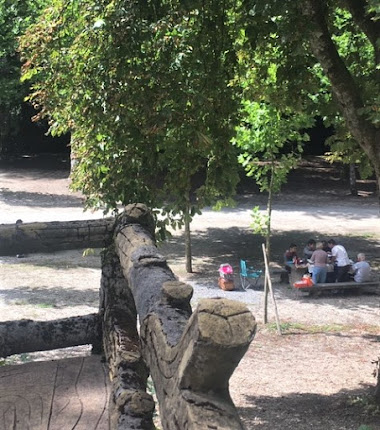 When I got back I noticed that the little island in front of our houses was all dug up and pretty much shredded over. When I stopped to chat with my neighbours they reckon we've now got a badger problem. I must say he's dug it up pretty thoroughly too. I wonder if I could tempt him in to my veggie plot once I've pulled everything up!
It's André's birthday on Sunday so I had asked the kids if they would like to come over to me for lunch to celebrate. André, however, had other ideas and suggested we all go out to eat at the lac de la Tour near Jordan and Jen's place as he's heard it is pretty good, and then they would like to go off go-karting afterwards. Suits me, as there is some good walking country round there, weather-permitting!
He took the day off today as he and Lily had a meeting with an adjudicator to see if their divorce paperwork is in order - which it is - so they've been given the green light to send it off and they could be divorced sometime in September! That's pretty fast isn't it - and kinda sad! That being said, they went for a coffee together afterwards and Lily asked if Ammie (grandma in the States) would mind if she kept in touch occasionally (not at all) and she told him that her grandma and aunt would also like to keep in touch with him as they were very fond of him. So he said he would stop in and see Abuela (Lily's grandma) as she has really been nice to him, but he told Lily that she has to realize that he won't be seeing them too often all the same. I told him I keep in touch with Ammie myself, although not with any of the rest of his dad's family. I call her maybe three times a year and we chat for about an hour. In the end, it's better to end it civilly isn't it. That being said, Lily asked if they could remain friends and he said that while he wouldn't be upset if he saw her again while out with friends, he didn't want to be around her too much at the beginning as he wanted to move on. That being said, if Pete was on the scene he wouldn't be there at all as Pete has definitely been crossed off the list. Even if nothing happened between Lily and Pete (he has no idea), in his opinion Pete very definitely crossed boundaries within his and Lily's marriage!
Moving on to other things, he then told me that he is loving the "envelope" budgeting system that we set up together as it gives him a tangible insight into what he has available to him to spend and how he is planning his different expenses. Apparently Lily was so impressed that she is now going to do the same - which is ironic because she's Swiss and works in a bank! But still, if it works, it works - I told him Nanny and Ted (my mom and dad) would be so proud if they could see him using "their old fashioned ways" to get a handle on his budget!
And finally, I was pulling stuff out the fridge tonight to see what needed using up because I'm tired of wasting food. I had two red and two yellow peppers so figured I'd find something to stuff them with. Then I pulled out a pre-made quinoa salad with pistachios, a packet of bacon lardons I had forgotten to use, half a bag of grated cheese and half a jar of spaghetti sauce. So I par-cooked the peppers and then stuffed them with a mixture of everything else all mixed together and by golly they were good. I'm not sure if I'll ever be able to replicate it but I'll sure give it a try as they were a definite hit!
Posted by Treaders at 21:10