As I'm trying to keep up the walking momentum in order to get to my 1,000 miles in 2020 (I passed 700 miles walked this week), I talked myself into going for a walk down to the lake at Thyez yesterday - my go-to walk when I can't be bothered to drive too far. And again it was beautiful. The temperature dropped down to about 27°C (around 80°F), with a lovely breeze blowing so it turned out to be the perfect day to walk. Again I think they had forecast possible thunderstorms but we got nothing in the end. Even so, it was strange to see how few people were at the lake considering it was such a beautiful day and a Sunday to boot. There was just one man on the beach and six people playing volleyball. A few fisherman and kids playing in the park. Further back at the picnic tables there were quite a few families out BBQing but if you wanted a table in the shade you would have got one. One lady was struggling to carry stuff towards a group of people setting up their picnics and shouted out "whatever you do don't come and help will you", so I just laughed and took some of her stuff for her. When I dropped it off they offered for me to have a drink with them, but as I wanted to get on with my walking I just thanked them and said I'd be on my way. I'd guess they were either Turkish or North African and probably about 20 of them all told, and it hit me then how I actually miss being part of a large family. We were a family of seven kids (I was number seven) so there was always someone around and we often went fishing/camping with uncles and aunts and cousins. Of course things change as you get older, my brother in Wales is dead, my sister is in Denmark and the others are in England. I'm divorced and while I have no desire to live with anyone ever again it did hit me a little yesterday that I missed "all that". Of course I have my kids but they have their own lives to live. Truth is, I know I like being in the hustle and bustle of lots of people and making plans for picnics and so on, especially now that I have the time. I guess it's just a weird time we're all going through, what with Covid and people having to quarantine if they've been abroad, but yesterday it hit me a little! Never mind, a good walk will soon sort that out!

Another thing that struck me was that the picnickers were mostly (but not all) either Turks or North Africans, as I mentioned above. When we came back to Switzerland from the States in 1989 we had a beautiful 3-bedroomed apartment in the vineyards just over the road from Lake Geneva. As André was only two we would take him down to the lake to play and you would likewise always find the Spaniards and Portuguese down there picnicking too. Then someone pointed out that the Swiss would most likely own their own homes (and therefore have gardens), and many of these Spaniards/Portuguese would be migrant workers so they would be in apartments. Never thought of it like that. Either way, they always seemed to be having a lot of fun!
I remember being down on the lake one time and two Spanish families had loaded up a huge table with all their food and drinks when the table started to keel over. It kinda happened in slow motion and my husband burst out laughing (it was funny) but I yelled "run" so we dashed over there and managed to help them hold the table up while the women rescued the food and booze. So they invited us to have a drink with them too! They were happy days!
While our apartment was beautiful and in a lovely spot, at the time, in 1989, we were paying SF 2,300 per month in rent ($2,300) and I knew that was ridiculous. So I pushed and pushed for us to move into France where that kind of money would easily cover a mortgage. I didn't really want to move into France as I loved where I lived but I knew moving was a no-brainer. That being said, I wouldn't move back to Switzerland now so we made the right decision in the end. And it seems André is coming to the same conclusion also, from what I was told today. He keeps saying to his friends "I can't believe it only costs ...... in France whereas in Switzerland it costs ....."! Finally, he's realizing that while Geneva is lovely, the prices? Nah, not so much!
Since I was only 15 minutes from Jordan and Jen's place I stopped by to see them. André had gone into Geneva to see friends so they were having a lazy afternoon to themselves. I mentioned to Jordan again that my heating system was still leaking and he'd better remind Max that I'm still waiting for him to fix it before I post something on Facebook (I wouldn't of course but I did tell him to tell Max that I would soon be French and then the real yelling would start). I mentioned to Jen that I had been cutting back branches on my damson bush and she said she could murder a damson tart right now, so I think I'll make one for her and take it over during the week. It'll be nice to do some baking again!
Then last evening I was invited over to my friend's for an apéro since her cousin was over. We had a great laugh telling stories of our various escapades, the cousin having lived in Colombia for a while, her sister having lived in Spain (and the US for the most part) and my friend and I telling our stories about living in France and Switzerland - you know all the stories of how you can screw up when it isn't your language. I may have had just a little too much to drink but ha, what the heck, the stories get better after a few glasses don't they!
I went to bed "early" by my standards last night but as I was reading around 11 p.m. I heard a "bang, bang, bang" that seemed to go on for ages. I thought it was weird to be lighting fireworks at that time, but then I realized it was probably down in the woods behind the church and they were most likely hunters (better that than serial killers, I guess). That would be where I saw my one-and-only deer one time and where the wild boar were coming from when they hit my car last year. Still, I wouldn't like to be out in the woods at night knowing they're down there hunting!
Anyway, this morning Jordan sent me a message to say that Max would stop over sometime today to take a look at my heating system, so I decided it would be better not to go out walking today. I did pop down to the recycling centre/tip though as I had quite a bit of stuff to get rid of - apparently so did half the town, it turns out. People were lined up waiting to get in and when I finally pulled in I noticed a woman had parked her car across two spots right in front of the "green" bins for the grass/hedge cuttings. Another ignorant driver. By doing that she was taking up two spots and yet people were lining up to get in! So I pulled up on one side of her and another woman pulled up on the other and I thought "I wonder if she'll get it when she has to wait to get out?" but she was still there after I left. Again, another ignorant, entitled sod!
I had to laugh though when I was pulling in - apparently someone was throwing away a horse! 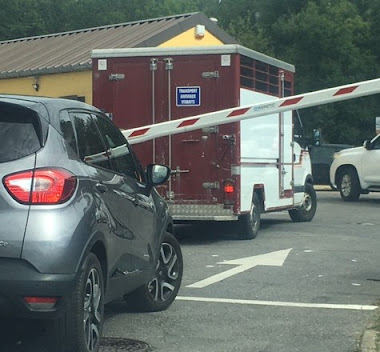 Anyway, Max called me and said he'd come by at 3 o'clock and did indeed show up bang on time. As he walked in he said "see, I'm right on time", so I just said "no, you're three months late" and he laughed. Jordan had been able to tighten one part of the leaking mechanism up but Max confirmed that he would need to order a new part but it was okay as "it was still under the one year guarantee". You're damn right it is buddy! We sat and chatted afterwards and I have to say he's been a great friend to my kids over the years. It was him that offered André a place to stay for as long as he wanted when he and Lily split up. They're all in the same band (he's the bass player, as well as being Jordan's boss) and have been mates for nearly 20 years, so I suspect I'll be seeing a lot more of him in the years to come.
And finally, someone posted the other day (sorry, can't remember who) about making "pot holders" for a family member. And of course that triggered a memory of when I was living in the States. Aunt Kris used to crochet beautiful blankets for all the new babies and one time crocheted me some "pot holders" for Christmas. I was a bit stumped as they looked pretty weird to me, but I didn't want to offend her so I went over to a small plant and put it inside the pot holder. Everyone burst out laughing and she said "you don't know what pot holders are do you"? and I said "I guess not". Turns out they were for getting hot pans out of the oven. Now if she'd have just said "oven gloves" we'd have been on the same wavelength! Divided by a common language, more like!
Posted by Treaders at 20:23