I couldn't get to sleep last night which, while unpleasant, is not the end of the world since it doesn't happen very often. I went to bed about 1 a.m. but ended up reading my book until 4 a.m. - when I finally nodded off - only to wake up at 7.30! If it's only the occasional time I can live with that (well obviously, I just did) but I do feel for people with long-term insomnia, it must be hell! It was raining when I got up and then I remembered I had promised myself I would go out walking today, because if little girls and little old ladies can do it, so can I! I decided I wanted to head out to three small lakes I had visited just before lockdown to see if you can actually walk around all three and how long it would take. There is also a very old bridge nearby that I wanted to visit called le Vieux Pont (the old bridge - not exactly given to hyperbole were they). When I looked it up I see that it was first mentioned in 1225 but it obviously dates quite a bit further back than that.

On a side note, that takes me off on another tangential "old bridge story" that I remember from many years ago (can't remember exactly when though I remember seeing it on British TV). There was a very old bridge that had reached an important centenary anniversary somewhere in Switzerland - either the Swiss German part or the Italian-speaking part, but I can't remember that either. So they had all the local dignitaries lined up and a massive ribbon tied across it for the Mayor to cut. The band was playing, the Mayor was holding the scissors - and the bloody bridge collapsed!!!! Thankfully no-one was on it at the time, and I later asked my friend's Swiss husband if he remembered it but he couldn't place it! Funny how it always stuck with me though!

Since I was heading out that way, I decided to stop in at the Saturday market in St. Pierre as I'm finding it difficult to store my fresh fruit and veg at the moment. Thinking about it, it might be a good idea to start shopping for it twice a week rather than just once in this heat. Anyway, as I was pulling into the parking lot, the lady just in front of me screeched her car to a halt and parked diagonally across two parking spaces. Now there were plenty of  spaces available where she could have parked well away from other cars if she was worried about her car getting damaged, but nope, she parked directly in between two cars but diagonally! Ignorant cow! I do wonder about people like that though! 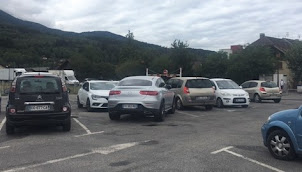 So I bought a few things - aubergines, courgettes, tomatoes and so on - and decided that since it was a bit cooler I wouldn't take them back home but head straight on out to Sallanches. Trouble is, I took the wrong bloody turn again and ended up back at the lake at Passy where I went a few days ago. Oh well, by this time I was getting hungry so decided to walk round it again since that was the main objective anyway. This time though, there were even fewer people than previously - even though it wasn't busy then. I guess since they had forecast thunder storms people stayed away, but we actually ended up not getting any rain. Obviously for people like me getting the lake almost to myself is great, but for the businesses there it's got to be very hard indeed seeing their August numbers drop so badly, right after such a strict lockdown!

When I pulled into the parking lot I handed over my €2 fee and realized that the young man didn't give me a ticket to display. Hmmmmm! He just waved me on through. So I tried to watch if he handed the next car a ticket (can't be sure) but on walking towards the lake I realized that some cars were displaying tickets and some weren't. That's obviously a nice little number he's got going there then. One for him and one for the boss! Since it was so quiet and I was hungry I decided to stop at the little restaurant there, blow my diet to hell with a Ceasar salad (very good!) and add in a glass of wine just to make sure I would feel like an abject failure. Nah, that didn't work, I thoroughly enjoyed myself! I think there were only five tables occupied on the terrace so I got to sit and watch the kids (and at least one dad) messing around on the "bouncy castle" kind of thingy!

I made it round in 45 minutes this time and it was more pleasant because the temperature had dropped and the wind had picked up - enough to get some good kite-flying in!

And talking of kite-flying (here we go again), I remember being in Denmark years ago visiting my sister with my then boyfriend. To give her a break we decided to take her little boy to the park and go fly a kite. It was really windy and the little guy and I were having a hard time of it. So my boyfriend - lovely as he was - then decided to "mansplain" to me exactly where I was going wrong and indicated that he would show me. Somewhere I have a fabulous picture of him all tied up in knots and struggling to get his arms free from the kite! He wasn't exactly easily given to laughing at himself but I almost peed myself when my little nephew took great joy in explaining what happened to my sister in Danish!
By the time I got back I was hot, and as I was taking my walking boots off I remembered my vegetables in the boot of the car. To say that I almost had ready-made ratatouille in my basket would be an understatement!
And finally, I see that Alexei Navalny, a Russian opponent of Vladimir Putin, appears to have been poisoned on a plane in Russia. Yet another poisoning, which makes the campaign of the three ladies who ran against long-time Belarus dictator, Alexander Lukashenko, all the more brave. Svetlana Tikhanovskaya - an English teacher - assisted by two other brave ladies, campaigned for fair and democratic elections. I believe all three of these ladies' husbands were political opponents of Lukashenko and had all been imprisoned. One of the ladies was also taken into custody just before the elections and had had her young children threatened. It came as no surprise to anyone that Lukashenko - who has been in power for 26 years - won! Very wisely these ladies have fled the country and taken their children to safety in Lithuania, although what "safety" means when you are dealing with these kinds of régimes who knows. The EU are already going to impose sanctions against Belarus and I hope Belarus will get to be the next country to indeed be able to hold democratic elections. Either way, the bravery of these three ordinary women is so inspiring!
Posted by Treaders at 22:21