We stayed in a hotel that was about 30 minutes out of La Spezia - which turned out to be a good choice as it happens, even if our little town hadn't really opened up for the season yet. It didn't matter anyway as we were always on the go and didn't really have any time to wander round! La Spezia was very pretty and it was from here that we were to catch the boat out to Cinque Terre - "the five hamlets", I guess, in English. Our driver dropped us off at the harbour where a guide was waiting for us and then the plan was that he would go park the coach and cycle back to meet us. Unfortunately he didn't make it because - as we found out later - he had been knocked off his bike by a young woman driving too fast!!! Thankfully he only suffered fairly minor bruising but did not want to take it any further! I'm just glad he was all right!

The bay leading out to Cinque Terre is referred to as the Golfo dei Poeti, or the Bay of Poets, but doesn't it sound so much more romantic in Italian!! and it was on the western side that we made our first stop at Portovenere - the Port of Venus. The boats we were on were kinda like taxi boats and people just hopped on and off all day visiting the different locations as they pleased. Our guide told us that we were very lucky to  have come before Easter (the start of the season) and to have good weather, because come May and June the weather would be hot and the place heaving! 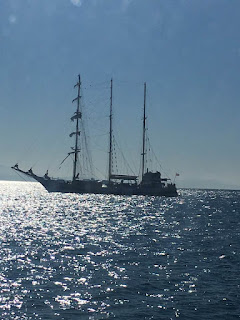 As each boat moored we were met by these guys (Senegalese mainly), hawking their wares and "real" Gucci handbags and "real" Rolex watches - all for the grand price of €10! I'm surprised they get away with hawking counterfeits and I wouldn't buy one anyway even though some of the stuff was pretty nice because I remember a few years ago people being stopped by mobile customs officers on the lake side in Evian just for buying this stuff and having it confiscated!

We didn't stop at each of the five hamlets - Monterosso, Vernazza, Corniglia, Manarola and Riomaggiore - as we didn't have enough time, so our first port of call after Portovenere was Corniglia. 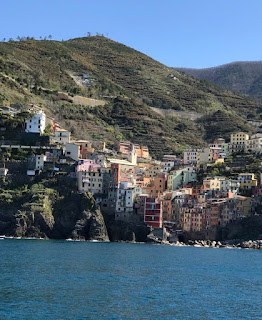 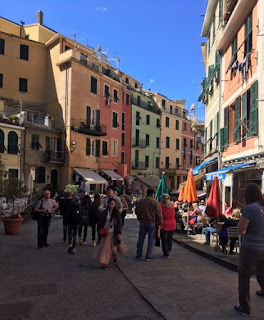 Corniglia was very pretty but was already starting to get crowded so my friend and I decided to forego the guided tour and just have a wander round on our own!

After that it was on to Riomaggiore and finally on to Monterosso for another four-course lunch, a wander round and a souvenir hunt. The vendors were all nice and cheerful, unlike some places I have visited, so I bought myself a pretty water jug and a few knick-knacks (to add to my ever-growing collection). 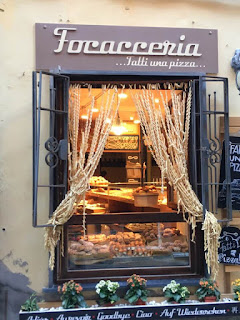 I just loved this focacceria - and that "fly net" is actually made out of pasta strung together! Neat huh!

Then it was back to our hotel for yet another four-course dinner!!! Wonderful food (again) but you wouldn't want to go swimming afterwards. So after dinner and a few drinks with our table companions it was off to bed for another early start the next day!
Posted by Treaders at 20:01