And the locals should know, although having lived here in this village for 30 years (and in this region for 36) you'd figure I would "think" like a local wouldn't you! Well apparently not! Ya see, round here they say never to plant your veggie plot until after les Saints de Glace have passed - that's from 11 to 13 May this year - because you can still get frost! Our village is at 800 metres above sea level (so around 2,400 feet) and yep, we did get frost twice last week! But every year we have such glorious months of March and April that I think "hey, spring is here, let's plant out all those seedlings I started". And every year I get shat upon from a great height (forgive the expression), the bloody weather turns and my seedlings get pummeled to smithereens! What's the expression - "keep doing what you always do and don't be surprised if you keep getting what you always get" - or something like that. Well I guess, to be honest, I did  listen somewhat this year because although I planted out a few cucumbers that I had grown from seed I did ferry them in and out of the house as the weather changed. So I've lost a few but I've still got some coming up that I finally learned to treat like the delicate seedlings that they are!

I absolutely love "roma" tomatoes - not sure what they call them in English - a kind of plum tomato that has little juice but tons of taste. But I find if I don't jump on the plants and buy them when I see them they often sell out! So I bought five decent-looking plants and have, indeed, been hardening them outside and bringing them in at night "just in case". I've got more seedlings on the go of course but I was thinking I would plant them all outside this weekend as I have a quiet few days - and then this happened!

The mountain behind my house is called Sous-Cou and is at about 1,600 metres. And we've still got bloody snow on it!!!!! Behind that to the right (but immersed in cloud) is Sous-Dine, which is the place to go locally if you want to see wild life (and where the hunters go). Beyond that is the Massif des Aravis, which is stunning of course, but seriously, at this point in the year shouldn't winter be over?


I had great plans to pressure spray my back terrace this morning - well that was until the hail came! Anyway, I nipped to our next village for the Saturday market and was chatting to the stall-holder there. He just laughed when I told him I had planted stuff out already and said "look at the bloody hail". His response? "Oh, you should always wait till after the Saints de Glace"! Maybe one day I'll learn!

Anyway, moving on, I went in to work yesterday as I had made plans to meet friends for lunch. I normally try to go in to work to use the gym on Wednesday (because the traffic is, theoretically, easier) but since I was meeting friends I took my gym bag and flowers for an adorable colleague who has just announced she is pregnant and pootled into Geneva around 10 a.m. So I piddled around in the gym for an hour or so, but you know what, although it is "piddling" (and it really is) I always feel so great when I leave! After that I went to lunch with a couple of friends - great Italian food (again!) and good company - and then came back to work as I had offered to drive one of my colleagues to the airport on the way home. But when we got back to work there were diplomatic cars arriving one after the other after the other - and the red carpet was out! Now since I'm no longer a staff member (but retirees still have access badges) I didn't know that U.N. Secretary-General Antonio Guterres was coming today to meet the big boss and give a speech - to which all staff were also invited! I would have been interested to hear his speech but since I had showed up in jeans and a t-shirt I thought it would have been out of place for me to attend. But still, here's me thinking that red carpet was for me (yeah, as if!)!


So moving on, I finally got around to starting reading "Fire and Fury" this week! I've had this book for a couple of months but since I always have piles of books sitting looking at me waiting to be read this one kinda got buried for a while. (A propos of nothing, I just finished reading "Thin Air" by Michelle Paver, which I kinda enjoyed - the story of ghostly hauntings out in the Himalayas, if you're interested)! Anyway, I haven't been able to put the book down, going to bed at 1-2 a.m. reading it every night. It's very well written (although too many "commas" maybe to my taste - you'd have to read it to understand, I guess. Sometimes the sentences get a bit convoluted with "sub" texts written between commas so I have to keep going back and re-reading to make sure I get all it all - and I'm no dummy when it comes to English - so that's only a minor criticism from my point of view)! That criticism aside, I find it an absolutely fascinating insight into the workings of the White House - or more exactly - the non-workings of the cast of characters in the current White House! It's pretty fascinating (and horrifying) stuff so far, so if you want a good read (and to totally depress yourself) read on! 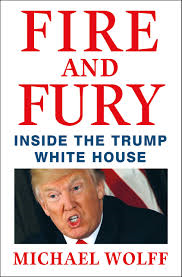 And finally, I see that the newspapers are full of the story of Vlad ("the Impaler"?) doing a face-plant while playing ice hockey! Don't get me wrong, as someone who can't skate I'm in no way making fun of his face-plant, but apparently his team won 14-6 (I think) with him scoring eight of the goals! Seriously? Do you think any of the opposing team would dare to tackle old shark eyes! And this, seemingly, a guy who the Donald worships at the alter of (I know, I know, Churchill would hate that sentence!)  Oh well, I hear the Donald was thinking of warming up on the sidelines just in case Vlad's victory was ever in doubt! Nah, I don't think there was ever any doubt who would score the winning goal do you? 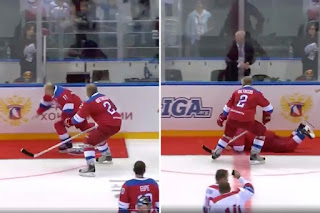 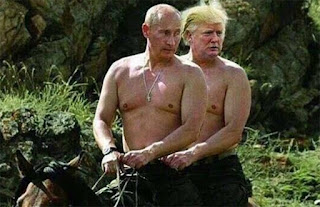