After our visit to Cinque Terre the schedule for the next day was the leaning tower of "pizza" and a trip to a marble quarry. I had mixed feelings about Pisa because for some reason I had this idea that it was a bit "shabby", although why I thought that I have no idea! So I got quite a shock when we pulled into the parking lot at Pisa and found out what a delightful place it is. Not shabby at all - it was beautiful!

The entrance way to the "walled part" was full of market stalls and the ever-present Senegalese selling their "real Luis Vuitton" bags. I did "cave" and bought myself a nice leather backpack (not Luis Vuitton) for use as cabin luggage on future travels, although I have none planned as yet! It's rather nice, if I do say so myself! When we walked through the arched entrance to the old town it actually took my breath away as it was so stunning! 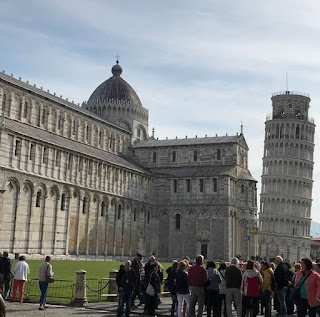 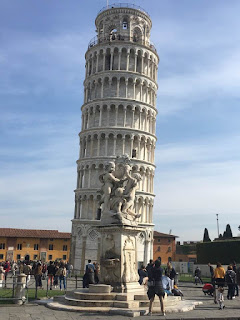 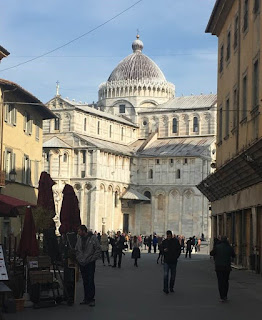 Of course people were taking all the "corny" pictures of themselves "holding" the tower up but luckily we got there around 10 a.m. before the crowds started piling in. Good planning all round on the part of our tour operator! My friend and I decided not to go into the buildings but rather to take a wander round the town itself and, my, how pretty it was. There was a plaza called Piazza dei Cavalieri just a couple of hundred metres away from the main square which seemed to house the main school district of Pisa, and again it was stunning!

After a couple of hours in Pisa it was back to the hotel for another four-course lunch (!) before we were due to head up to Carrara to visit the marble quarries! The mountains all along the coast oddly seemed to have "snow" on them but our driver explained to us that all that white "snow" was, in fact, white marble!  He took us up the mountain as far as he could but after that it was into jeeps for the hair-raising trip up to the main quarry! We had six jeeps (I think) and four people had to go into the back of each, open-sided jeep for the trip up. My friend and I were with two older ladies, one of whom was absolutely terrified! So terrified, in fact, that she kept her eyes shut for most of the journey. We were all bouncing around like bill-yo and her friend was roaring laughing. I suppose it would have been more frightening for us if we could have seen that there were no guard rails or anything over those ravines but sometimes we were just "driving blind". Once we got there a much older lady (I would put her at about 80) hopped out of the front jeep and doubled up laughing. Her laughter was so infectious she had us all in hysterics! Our guide knew his spiel inside out and made it a fun trip, but I would almost say that that jeep journey was the best part of our trip! 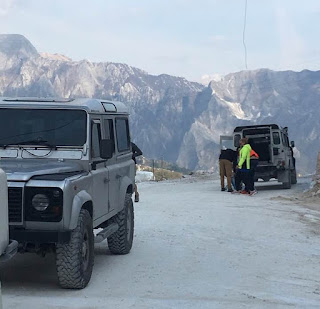 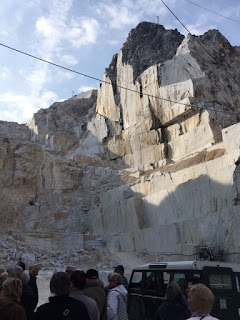 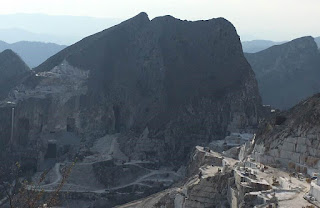 After that it was again back to the hotel because we obviously hadn't eaten a four-course meal in a while (I'm being facetious!), a couple of drinks and off to bed for yet another early start the next day!