And then it was off home!

We had yet another early start on our last day as our driver was saying that it could be quite hit and miss with the traffic (in more ways than one) during the week. But, as luck would have it, the traffic conditions on our way home were really good and we made pretty good time. We left after yet another sumptuous breakfast and I made sure to tell the hotel manager how much we appreciated the wonderful food and asked him to thank the chef and kitchen staff in particular! We stopped at a service station after a couple of hours for coffee and snacks then headed back up the Aosta valley where we were to have lunch at a place called Pont St. Martin, not too far from the French border. Another four-course meal? Nah, this time it was five-courses, and again it was excellent! When you take into account the travel, the hotel, the excursions and all the meals (which included wine and coffee), I really think our trip was very fairly priced at just over €600!

After lunch we had around 30 minutes for a little wander so we all trudged up to the famous "pont" - or Roman bridge which was built in … errrr Roman times! 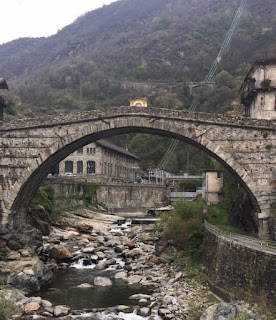 This picture just tickled me - "don't do it Winnie, don't do it!" 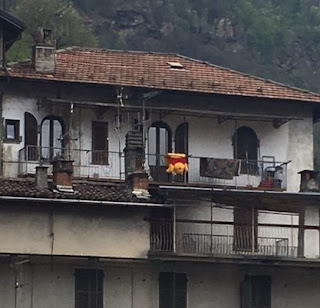 Another thing I found kinda interesting was the vines in this area! The supports for the vines were actually constructed horizontally sticking out from the side of the hill - thus making it easier to pick the (future) grapes! Smart huh!

About 30 minutes later we stopped at a large hypermarket for some last minute shopping. Just as the Swiss fairly routinely hop over to France to do their grocery shopping - it's quite a bit cheaper, especially wine, meat and cheese - many French also pop into Italy to buy certain goods, with Italian cheeses and hard liquor being considerably cheaper than in France. Now in this instance you have to take into account the cost of the toll for using the Mont Blanc tunnel but I guess if the savings are big enough it can be worth paying it and having a few people going by car!

Which kinda brings up the thought that if/when Brexit ever happens some towns in northern France (particularly near the Channel tunnel) will be very seriously affected if the Brits can no longer take day trips to France and fill up their cars with French goods without having to pay duty on them upon returning to the UK. I know the association of Maires in northern France is very worried about this situation and have taken it up with President Macron. I don't know if it will do them any good but …!

Anyway, my friend and I tootled round the supermarket and then got in line to pay in order to be back at the bus by 4.45 pm. Except, our lady cashier was a stereotypical Italian, chatting away to two men in front of us, kisses on both cheeks, talking with her hands, "hey Luigi, how's mamma? And Isabella. Cara mia, she must be so big no!" You get the gist of it. My friend was getting a bit pissed off but I found it quite charming (and in any case the bus wouldn't have left without us) - and we made it back on time anyway! But that kinda reminds me of my mom who seemed to think all foreigners were deaf so IF …. YOU ….. SPEAK ….. VERY ….. LOUDLY …. THEN …. THEY …. WILL …. UNDERSTAND! That's what this lady did to me when she was counting out my change VERY SLOWLY (this despite the fact that I live in France and yes, we use euros too)! Ah well, no harm done!

So we made it through the Mont Blanc tunnel with only about a 10 minute delay but on the French side! Oh my! They were showing at least a 90 minute delay to get into the tunnel which would have been very frustrating for people who thought they'd just pop into Italy to spend a few days over Easter! 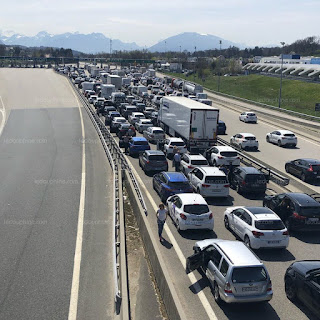 although to be fair I think that was more down to a gas leak than holiday traffic!

So that's it for the time being. Well not really I suppose as we are off to Turin market in two weeks time, but that is only a day trip (our annual mosy round the market). Oh and we have picked out another five trips we would like to take with this company, but only one is an overnighter. That's to the Christmas market in Alsace in December (obviously) and that trip is already almost fully booked up!!!! So now it's back to the routine and back on the diet, trying to shift goodness how many kilos I managed to pile on on such a short trip! But it was well worth it!