Well I still  have a million things flitting through my head to write about - hence the name of this blog really I suppose. But somehow, I added a few more! Today, being Ascension, it is a public holiday here in France, so not much going on. I didn't know if our local market was on as usual because of the  holiday but decided to forget about it and settle down to get a few things done at home. I mean, in France there is always another market tomorrow. And yes, indeed, I will head off to the market in Bonneville tomorrow before doing my grocery shopping. I have occasionally been to this market (not routinely being off on a Friday), but it will be good in any case to check out another one.

Anyway, where was I? Oh yes. There is an expression in French that goes "je saute du coq à l'âne" which basically means I "jump from the rooster to the donkey" - or my mind goes in a million different directions at once! I guess that's me at the moment.

Anyhoo, back to the real world. Mother's Day in France is always the last Sunday in May. Jordan was born on Sunday, 31 May in 1992, so on French Mother's Day. In Switzerland (where my oldest lives), Mother's Day is two weeks prior, so mid-May. Anyway, I knew Jordan and Jen were going to lunch at her mother's for Mother's Day and it didn't bother me, so I invited them to stop over on the evening. I can't say this stuff bothers me that much so having them go to her mom's for lunch was fine by me. (I remember one Christmas after my divorce that there was absolutely no way I was going to spend Christmas with their dad and his skank so told the kids to go to his place. They were torn of course but I just thought "get on with it", I ain't having him here so go there)! And I was fine with it!

Anyway, after lunch Jordan sent me a message to ask if Jen's mom could come over with them! WELL OF COURSE SHE CAN! I learned afterwards that mom wasn't doing too well so "come on over"! Well they came over and we started off playing some extremely daft board games while dinner was cooking, but you know what? It was fun! 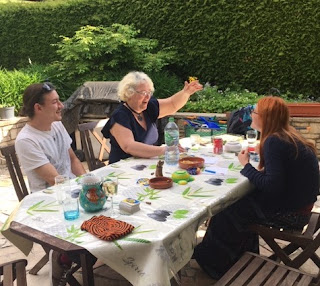 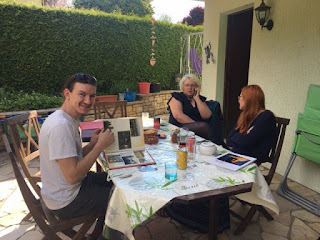 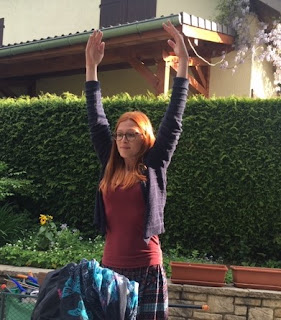 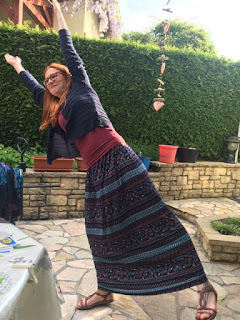 I tend to cook for an army anyway so I don't see where the problem is and we ended up having a very nice evening together!

Monday night was our last "Monday night sewing club", of which I am now the "Présidente". We didn't plan on sewing but had decided that we would all eat together. Everyone bought a dish and it was a very, very nice evening. The club meetings are not a course as such as everyone takes their projects and does what they want but we have a lady who comes along and who really knows how to sew and she helps out wherever. This is the first year for Patricia to help us out, and to say that she is really "rough around the edges" would be an understatement! She has had a tough life and it shows but she is actually very, very nice and we all appreciate her. Anecdotally, her father was a "native (US) Indian" (not sure how I'm supposed to phrase that), who came over to France just after WWII and never went back. But she said he was an evil, alcoholic bastard who ruled with a rod of iron (when he was sober enough to do so) and her mom lived a life of hell - until he abandoned her and their five children! So to say she is "tough" probably is an understatement! Add to that, a few years ago her 20-something year old son was dashing down the stairs to go out, fell, smashed the back of his skull in and is now permanently brain-damaged. She has had to fight to get him the help he needs knowing that he will never get better, so I'm sure you can see why we all take her "abrasive" tongue with so much leeway! In fact, on Monday evening she was ranting about something when I looked at her and said (in French), "you know Patricia, to hear you speak is pure poetry! When my appointment comes through for my naturalisation (to become French) and where I will have to have prove that I speak French fluently - maybe we can get together so that I can practice with you - I'm sure they will be impressed!" At which point she just doubled up laughing! Which was the whole point really! She is rough around the edges, but is good at what she does and we like her!

I had spoken to Geneviève previously and she said she would buy a wine set for Patricia as a thank you from all of us, so I said I would get some flowers, to show our appreciation. Well I went down to St. Pierre to my local shop that morning only to find out that they weren't open on Mondays! Damn! So I dashed off back to our local town where I thought/hoped our bigger flower shop would be open - which it was! I picked out a lovely arrangement and took it in to pay for it when the lady asked if "it was to be placed on the coffin immediately?" I said "I hope not, she's not dead"! At which point the lady was at pains to point out that "no of course, they weren't typically funereal flowers". When I think about it, that shop is mainly for funeral flowers but …. how was I to know. I thought "shall I tell Patricia or shan't I" - and in the end I thought "sod it" and I did. We all had a great laugh!

One big issue that came up as we were chatting over dinner was that our group is a very friendly, happy group. Mid-year Pascale showed up and asked if she could join! No prior contact, she just showed up! Well that was no problem of course, yep come along and join in! Except, Pascale was a miserable, demanding sodding cow from day one! What to do! She was obviously (physically) not well - that was apparent from the get go. Terribly, terribly thin, with a pinched mouth! But she was also very, very demanding right from the start! It didn't matter whether Patricia was helping someone else or not Pascale interrupted and "demanded" attention immediately! Now, looking at her you could see that there was something very, very wrong immediately. She was stick thin with a pinched mouth and a very, very sour personality. I had been absent one week (probably when I was in Sri Lanka or Cinque Terre) but the following week they asked me how old I was!!!! I said "you know I celebrated my 60th in Sicily in September so what gives?" So they asked me how old I thought Pascale was - to which I answered "not far off 80".  Turns out, she was also 60. So compare fatty old me to skinny old her at the same age, and I can tell you she didn't come out of that comparison well! I was stunned!

Now apparently she suffers from anorexia. Seemingly many years ago a boyfriend had told her she was too fat and …. there you go. But she is a thoroughly, thoroughly unpleasant person. Cynthia, one of our group, is Swiss and moved into France probably 20-30 years ago. At the time she had Swiss plates and said she remembered going to get her Swiss plates changed to French and Pascale happened to be working there (pre-anorexia). She told her that she would "denounce" her to the authorities if she didn't get it done in time!!! As Cynthia said, "I was well within the time limits and here I was doing the necessary to get my Swiss plates changed to French plates when this miserable cow 'threatened' me"! And she was right! She has always been a miserable sod apparently! It turns out that Pascale is married and has a daughter but is unpleasant to everyone. AND it turns out that when I missed one night when I was away she had been so, so rude to Patricia and Cynthia because Patricia was helping Cynthia and not her! I realize that this woman has problems, but it seems to me that she was more than unpleasant before that. My ex-husband had "problems", but beyond a certain point, "hey asshole, deal with them"!

So obviously a lot going on here. Cynthia knows her mom and says she is very sweet. God alone knows what Pascale's husband and daughter go through. BUT she is a thoroughly unpleasant person at the club and Patricia said "nope, she goes"! Now there were two of us who were willing to give her another chance but as Patricia rightly said if you end up with a "cow" like that coming to the club other nicer people will stay away so she has to accept the consequences of her behaviour. And they are right. She has, seemingly always been a thoroughly unpleasant person, so they have decided it is "niet" to her re-enrolling. But it's sad really isn't it!

And finally (for today), Jen asked me (confidentially) to translate something for her from French to English. So today I was intending to translate the order of service for their wedding ceremony but was having terrible problems with my computer. I had downloaded Office 365 as a staff member of my former employer and honestly there was no problem with my continuing to use it (until when?)! But every time I tried opening a word document I kept having to sign in with my former, employer account - and I had forgotten the password! In the meantime I had bought Office 365 for myself and downloaded it but couldn't get "word" to switch from the employer account to my personal account. Anyhoo, I logged on to Microsoft support with my problem, whereupon a lovely lady called Trista spent two-and-a-half hours trying to fix my problem by remote logging - and in the end she did it! But two-and-a-half-hours! Anyway, what can I say. I had nothing confidential on my computer so told her to go ahead and kept checking when she needed me to try logging in again (and again, and again). But hats off to Microsoft support - I was really impressed! In the meantime, I hope it will allow me to go ahead and translate Jen's order of service and, completely confidentially (schhhhtttt - don't tell Jordan) - she is practicing to recite her vows to him in English (once I have translated them of course)!