It seems like ages since I posted but I suppose it hasn't been really. I guess I've just been so busy (nothing that important of course) that time has flown by! And I've come to realize that I actually like being busy (for the most part) even in retirement. When I was at work I much preferred being busy rather than not having much to do. You get lazy don't you? Or at least I did! So where was I? Oh yes, Turin.

Last Saturday my friend and I took our, now annual, trip to Turin market, only this time, for the first time, we weren't lucky with the weather at all! It absolutely peed down all day, to the point that I think everyone on our bus was thoroughly soaked! For once I thought ahead and actually took a towel and change of socks in my bag, but boy did we get wet! Still, we both enjoyed it as always, and ate, yet again, in a little bistro off the main market square. And as always it was excellent. To be honest, I'm not sure you can eat badly in Italy at all!!! I didn't go nuts at the market this time though, just bought myself a very cheap pair of lazing around slacks (wish I'd bought three or four pairs - they turned out to be great), a nice, new handbag and a couple of shirts for my son. After that, it was fruit and veggies, and again they are just out of this world - and so cheap compared to here! 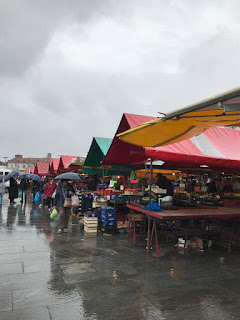 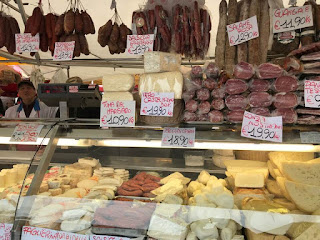 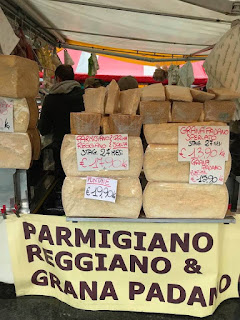 Now I know these are different varieties of avocado (bought in France on the left and in Italy on the right) but the quality of the much cheaper Italian avocado just bore no comparison!

We had a wander around the indoor fish and meat market, where everything looked so wonderful. I think next time I will get myself better organized and take a large cooler to stock up!

To get out of the rain, just before we were to head back to the bus my friend and I stopped off for a drink. Her hot chocolate was so thick you could have stood your spoon up in it! 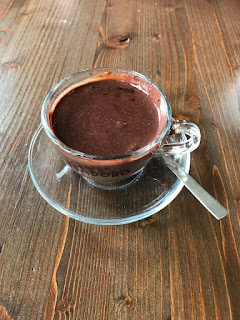 On the way back we again stopped off at the Italian hypermarket where people stocked up on the cheaper Italian produce and alcohol and then back home for around 8 p.m. It was a shame about the weather but what can I say … we still love going! We found out at the end of our trip that there had been a second bus going from our depot and bumped into a lovely lady that I used to know when I went to my Monday evening patchwork club. We also bumped into a colleague who is still working - the one who forwarded my tax information regarding my lump sum to the French tax authorities without my permission! She is one of those big "blousy" women, with trowelled on make-up, beehive hair and a loud mouth and though I tried to dodge her I got caught out. She was asking how retirement was and I told her how much I was enjoying it, to which she replied "well of course you were a higher grade than me - that's why you can afford to retire and I can't, even though I'm older"!!! She didn't see the irony of then going on to tell us that she went down to Turin clothes shopping every weekend while they were running these bus trips! I bit my tongue as there honestly is no point trying to reason with some people is there!

The next day was the semi-annual Foire du Tissus (Fabric Fair), where the big fabric sellers come down from Holland and Belgium to sell their beautiful fabrics. We were late getting there but whole busloads of people had come from Switzerland and taken back suitcases of fabric - I guess it's that much cheaper than in Switzerland. I wouldn't know, actually, as I wouldn't even know where to shop for fabric in Switzerland any more. Here again we bumped into three ladies from my former patchwork group and I promised to stop in and see them the following week. I was actually very reasonable and only bought two pieces of fabric for €10. You could go mad there, of course, but I reckon I have enough fabric to keep me happy for quite a while and a few projects on the go that need finishing up first. (In any case, don't tell anyone, but the Fair will be back in town in November!!). 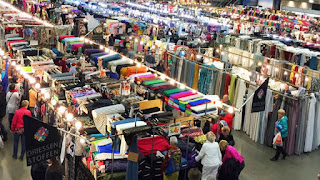 Anyway, I decided that I would, indeed, stop back in to visit my patchwork ladies as they were a nice group. So I had a shot at baking Anzac cookies (for the first time) to take to visit. They didn't work out exactly as planned as I made them too runny and they were "gooping" all over the place. Not to worry, I cut them out with a cookie-cutter after baking and they turned out great in the end! Anyway, I popped in to see the ladies just as they were having a coffee and cake break during their all-afternoon sewing session. I told them that I wouldn't be coming back to the group as I didn't want to take on too many weekly commitments, but they said to just to pop along a couple of times a month when I felt like it - so I probably will as I have so much to learn from them. Their work is beautiful!  But .. don't laugh … when I got home I felt like I was going to sneeze so tried to reach into my trouser pocket for my hankie, only I couldn't get it … I had had my brand new Italian trousers on backwards all day and hadn't noticed! Seriously! You wouldn't want me to make alterations to your clothes now would you!

And I know I was saying in a previous post about how we Brits love to talk about the weather but look at these babies which have been hanging overhead for about the last week! Yeah, spring! Ya gotta love it! 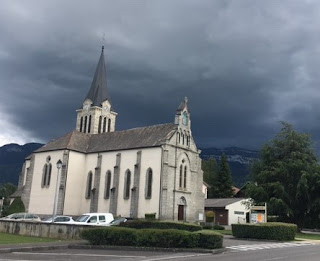 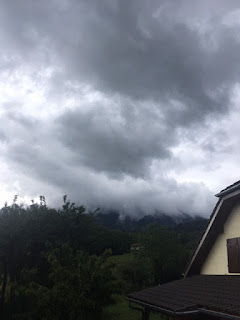 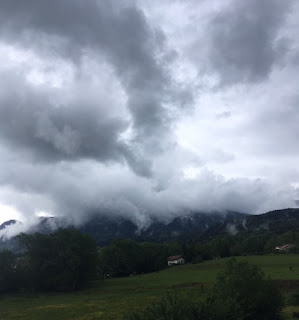