And then there was Italy!

Just before Easter I got back from a four-day trip to Cinque Terre in Italy, and while I'm completely knackered it was so worth it! I know it sounds like I never stop travelling - and truth be told I feel like my feet haven't touched the ground since I retired - but it wasn't actually planned that way! Of course no-one could predict having to fly back and forth to Wales due to my brother's illness and subsequent death. Then the trip to Sri Lanka in March had been planned before I even knew I was retiring, so it was to be my annual "winter sunshine break" before going back to work! Well as we all know it didn't quite work out like that! After that, my friend spotted that our local bus company was doing a trip to Cinque Terre in Italy in April (it has long been on my bucket list) and "should we go for it"? They hadn't done this trip last year as they tend to alternate years but the girl that we booked with said it's a trip that could reasonably sell out every year so we jumped on it and reserved in January. Good job we did too as there were only eight places remaining (I think) and no single rooms left. That meant my friend having to put up with my snoring in a twin room (I did forewarn her) but guess what? She snores too so it didn't work out too badly in the end!

Anyway, we dropped off my car at the travel agent's and picked up the bus at 6 a.m. It's only around 500 km to Cinque Terre but bear in mind that you have to go through the Mont Blanc tunnel (11 km/7 miles under the Mont Blanc) before you get into Italy and then down through the winding roads of the Aosta valley before you hit any kind of straight roads. So you're obviously not going to be breaking any world speed records here! In fact, our driver told us that the Italians had recently introduced "tronçon" radars. A "tronçon" is a "leg" as in the "leg" of a journey, so they know that if you went through one radar at place X in the Aosta valley you should not pass the radar at place Y in less than XX number of hours - if you do you have been speeding and they will catch you. Our driver said it works too! So now you know - if you are driving in Italy watch out for the maximum speed limits!

I always find it sad and kinda weird going through this tunnel though as our (very knowledgeable) bus driver was talking about the 1999 fire as we went through (has it really been 20 years?) and the changes that had been made to tunnel security since. The fire was caused by a refrigerated truck carrying margarine and flour catching fire, killing 39 people in the process, including a brave young Italian named Pierluccio Tinazzi who managed to ferry nine victims out on his scooter before being overcome himself and dying as he tried to save a tenth victim!

Anyway, after travelling for a couple more hours, we stopped just after 9 o'clock for a break where the driver broke out the bread, ham, cheese, coffee and red wine that was provided by the company! Not that he drank any wine of course - I think only one man had a glass. Then again, I suppose the sun is always over the yardarm somewhere in the world isn't it!

Around mid-day we arrived in Genoa where we were treated to our first, four course Italian meal!!! Four courses!!! Crikey - and that is just routine in Italy - but it was so good!  And Genoa, of course, is where the bridge tragically collapsed in August 2018 killing over 40 people! Again, crikey! Can you see a pattern here? But when you see the landscape round there and realize it is subject to earthquakes and therefore how the landscape is virtually just mountains and valleys, you can imagine how difficult transiting Genoa had become because of that collapse!

Our driver was telling us that on one trip they were actually hit with a fairly substantial earth tremor but I was kinda hoping we could give that a miss! I've had enough "excitement" to do me! And, although we didn't get to see much of Genoa I have to admit it was a very beautiful city! 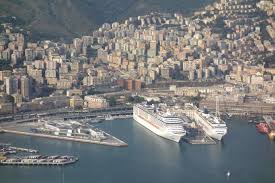 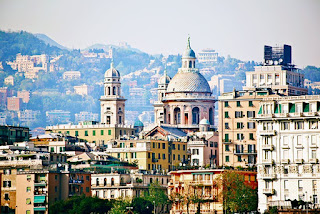 In another couple of hours we made it to our hotel where my friend and I had a decent enough twin room - and another wonderful four-course evening meal before going to bed for an early morning start the next day to visit Cinque Terre! Blimey, we hadn't even spent one night in Italy yet and we already felt like Tweedledum and Tweedledee!