Crikey, I don't half get side-tracked don't I!!!!! Anyway, back to Sri Lanka again! Next day we headed up to Kandy, which is situated in the centre of the country. Actually, and going off on a totally different tangent (yet again), I read "The Tea Planter's Wife" by Dinah Jefferies sometime ago, which is set in Ceylon (as it was then) and loved it. I've read a few of her books and love the way she manages to give you the feel of the place in her writing. I remember her describing travelling down to Kandy for supplies and so on and now, having seen the place for myself, I can see how evocative her writing is! Our hotel for this night was the fairly majestic Queens Hotel. Well I say "fairly majestic" as it had obviously been pretty classy and, I suppose, fashionable, many years ago, but I have to admit it was a little "tired". Oh the main reception and dining room and so on were pretty nice, all beautiful wooden floors, but the rooms and the bathrooms definitely needed money spent on them and updating!


Actually, my room had a kind of small corridor leading off it with a door to an adjoining room (I'm guessing) and then on to my bathroom, but I did find it somewhat "spooky" so whenever I feel like that I always wedge either a chair or my suitcase up against the adjoining door "just in case"! On our trip there was a group of three friends who travelled together once a year, having met up in India on a previous trip. They were about my age, I would guess, or maybe just a couple of years younger. Anyway, while they were friendly enough they pretty much kept to themselves and did their own thing, so I got quite a shock the next morning when one of the woman said she had had a man banging on her door during the night. Now these three could put the booze away and there was also much drinking and revelry coming from a wedding party at the same hotel, but she said it frightened the life out of her! I don't know if she called reception but I certainly would have and asked them to send someone up to make him go away! Then the next morning we were told to put our suitcases outside our rooms by 7.30 a.m. so that the porters could load them on to the bus. I was at the end of a long corridor in the penultimate room and there was a Buddhist monk just "prowling" around as I was putting my suitcase out. All the different nationalities were pretty much kept on separate floors and I'm 100% certain he wasn't staying in that corridor so I made an excuse to go back to my room "to check on something" and he was just coming out of the last room in my corridor where the door was unlocked! You know, the one with the adjoining door to my room! He wasn't staying in that room and he definitely gave me the creeps, what with the hotel having a bit of a feel like the hotel in "The Shining". Can't say I was unhappy to leave there!

A group of us decided to go out for dinner that evening and again the food was very good, after which we went to a display of Sri Lankan dancing (and drumming - which was pretty impressive). Both the men and the women wore beautiful costumes and as long as it doesn't go on forever I actually enjoy it very much! 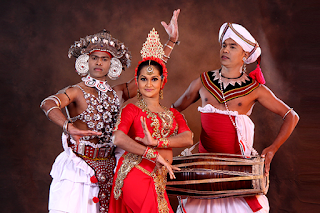 Anyway, the whole point of that stopover was to visit the Temple of the Tooth (which, it is said, contains a shrine housing one of Buddha's teeth), and the temple was indeed really spectacular! Whenever you visit these temples you are expected to cover your arms and your legs (at least as far down as your knees - both men and women) AND your head must be uncovered and shoes are not allowed (although you could walk around in socks). Now at some of the other temples I saw people in shorts, which I thought was disrespectful, but nobody said anything to them. At this temple, however, there was no way anyone would have gotten in if they didn't meet the strict dress code. The men went in through one door and the women through another, and although I had on long trousers and a shawl to cover my arms, there was a lady security guard there who tugged my shawl high up to my neck and knotted it (the shawl not my neck)! Our guide, Prasana, told us that one time he had a Turkish lady on one of his trips and she insisted that she was going to keep her veil on - but there was no way she would get past the security at the temple like that! Oh she kicked up a big fuss but there was no doing. My thoughts are "if you are adamant that you are not removing your veil, why go visit a temple in the first place"? Doesn't make sense to me!

The temple, of course, was stunningly beautiful but very crowded and I was as hot as hell with my torniquet of a shawl! But it was definitely worth a visit, although I felt my pictures couldn't do it justice so had to use some google pictures to try to show how beautiful it was! 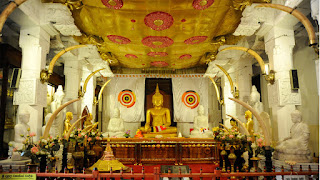 As I say, I don't feel that even the google pictures do it justice - but it really was just stunning and so worth the visit!
Posted by Treaders at 18:16