What a magical New Year's Eve!

Do you know how some day's are just diamonds, how some days just seem to work out! Well New Year's Eve was just one of them. It was obviously a good visitor's combination trip because I followed the same route some years ago with my family and we all agreed it was such a great way to celebrate the New Year.

As I mentioned previously, I had a friend over from England for four nights. We met in Peru four years ago and had remained in touch.Steve had even been out to visit me once previously when he was on business in Zurich. Turns out he is still just as much fun as I remember and we had a wonderful time. On top of that, the weather cooperated 100% - though not for the skiers of course, but for we lesser mortals it was just fantastic.

On the morning of 31st we headed out to Lavey-les-Bains which is a hot springs about two hours from here. We took the "scenic route" (although to be honest around here all routes are "scenic", following Lake Geneva on the north side in order to arrive high up above Vevey, Montreux and the Château de Chillon. Again we lucked out as it started out foggy but as we got to the highest point on the motorway the fog started to lift!

Another 45 minutes and we were at Lavey. It was freezing cold out but the springs, of course, were steaming and sooooooo relaxing. It wasn't too packed considering and at one point I was standing under one of the pressure jets having my back pummelled when I looked at the man next to me and recognized a work colleague with his young son (don't usually see 'em with their clothes off do ya!). We had a chat and he told me that his wife - who is also a colleague - had gone off to Strasbourg with their daughter. Steve and I had been talking about just how you should never assume you won't be caught out if you are having an affair because I mean, what were the chances of me bumping into a colleague (fair, I suppose) but again what were the chances of my standing next to him in the steaming mist of Lavey?  Of course he was there with his son and not his mistress but crikey it's a small world isn't it!

After about three hours we headed off back home via Evian, which is on the south side of Lake Geneva. I knew the "Festival des Flottins" was on but didn't really know much about it, although I knew that Steve would like Evian anyway. Well what a lovely surprise "Les Flottins" was! And here, for your greater delight is their story!


* * *
"Listen, listen! And you will hear.  And if you want to believe, you will believe! Wherever you are... sprinkle a little pixie dust around you and tune in to the sound of fairy bells!

Since the beginning of time, fairy-folk of all kinds from throughout the Alps, including elves, sirens, nymphs, witches, fairies, pixies and hobgoblins, have been washed up on the beach in Evian. From snowfalls to avalanches, from trickling springs to streams to rivers, from small rivers to the majestic Rhone, they are carried along on their driftwood rafts according to the whims of Mother Nature, until they finally reach the banks of Lake Geneva, a magical place where they find rest. These tiny creatures are known as Flottins…”

Every winter, Flottins flock to their village, built entirely from pieces of driftwood washed up by the river. In their bright, cheerful world, these joyful travellers lead a peaceful existence. But one November evening, as Santa Claus set out on a practice flight over Lake Geneva, a squabble between the leading reindeer forced the sleigh into an emergency landing on the water. Panic stations! The inhabitants of the village immediately swam out into the lake to save them and, that very night, they set about building a magnificent cabin from driftwood for their marooned visitors. Since then, Santa Claus pays a visit to his Flottin friends once a year before setting out on his big trip...

These magical creatures were all over Evian and kids were allowed to climb and play anywhere they wanted. 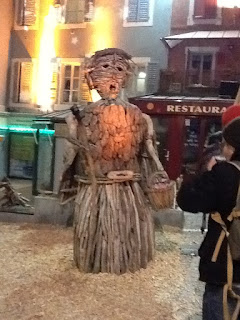 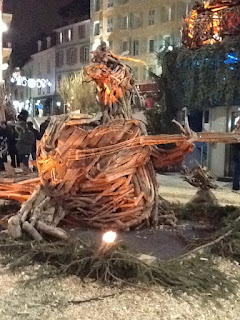 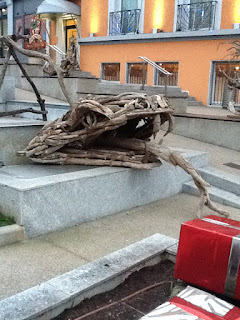 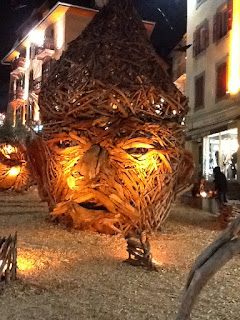 The whole town was filled with these things and the nearer you got to the casino (which of course was beautifully lit up) the more there were. It was just stunning and I can't even say it was that crowded. After a couple of hours and a few hot drinks in Evian we headed off home to spend New Year's Eve in front of the TV watching comedy shows, eating smoked salmon blinis with a bottle of champagne. As I say, some days are just diamonds!
Posted by Treaders at 14:54