The trials and tribulations of being a woman!

Yesterday I had lunch with a group of friends/former colleagues. We have all worked together over the years and as time goes by we, as a group, are passing from "active" to retired colleagues.  I started working with Janet in 1980 when I first came to Geneva and she retired about three years ago, so we go way back. I have to admit we had an awful lot of fun in those days. In fact, we all worked hard but were able to have some great times along the way too. It has always been a very friendly place to work but as time went by and the number of employees more than doubled it has become difficult to maintain that kind of friendly, family atmosphere. Don't get me wrong, it is still a great place to work, though just not as "familial" as it used to be.

Anyway, the girls were asking about my preparations for my son's wedding in July so I was telling them about how I had seen a beautiful dress, how I was definitely going to lose 16 kg (yeah right) and that I was thinking of getting a spray-on tan for the event. I had had one many years ago - oh, about 20 I would guess - and it turned out lovely. It was one of those shower-type salons where you go in there starkers except for your shower hat and then get sprayed on all sides for about 20 seconds. The tan was very subtle as I am not dark skinned and I looked really "healthy" as opposed to tanned. Trouble is, it was quite expensive and only lasted about five days so I didn't bother going back.

I am fair skinned and tend to go from lily white/blue to bright red with freckles then back to whitish/blue. In fact the only time I ever had a decent tan was when I back-packed round Australia for six months so my tan had six months to build up. I tell ya, when I landed back in London on December 14th 1983 (see how I remember the date) in my shorts and t-shirt (freezing my buns off because all my clothes had got soaked in Jakarta), very briefly I was probably the most tanned person at Heathrow Airport! That feeling of smug satisfaction lasted all of about 10 minutes until I got outside in the freezing snow and cold and had to try to fish out something not totally sodden to wear on the journey back to mom and dad's!

Anyway, fast forward to about seven years ago and they opened a new beauty salon directly over the road from work, I decided to give it another shot.  Of course, I was expecting something like the last set-up so I got the shock of my life when she handed me something that looked like a condom, told me to take all my clothes off and "put that on" (the condom - turned out it was a two-inch square of plastic to "cover my modesty"), and "would you mind if Françoise comes along to watch as she is a trainee?"  What!!! Who was going to be watching me looking like a beached whale wearing a condom?  But of course, being a wimp, I said yes. They actually sprayed/sponged me all over with the fake tan, the crowning humiliation of which was when they asked me to lift my boobs (off my knees) so that they could get under there! Oh the shame. I have to admit though that yet again it looked good, but, again, it only lasted about five days.

So when I told the "ladies that lunch" about my plans one of them reminded me of her experience at the same salon. They sprayed her with the fake tan and when she woke up the next morning, instead of a beautiful allover tan she looked like a leopard. Apparently some of the holes in the spray nozzle had been blocked and she ending up covered in polka-dots. I mean, seriously! Of course it's hysterical now but at the time she didn't find it very funny. Another friend was telling us about the time she tried it before going out that same evening (she's a redhead so doesn't tan) and somehow she managed to get covered in what can only be described as "dripping paint". She spent the afternoon locked in her (absent) boss's office trying to scrub herself down to get rid of the drip stains. She said she ended up bright red all over and scratched to hell!

Oh my goodness, that has given me food for thought. I think I might just try one of those gentle sprays you can buy over the counter, just for the bits that you can see. After all, I don't want to end up looking like Ross in that episode of Friends! 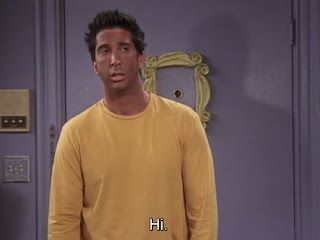