And the rest of Christmas

Christmas 2015 was a lovely break. The weather was mild and I got an awful lot done but you know how sometimes when you don't actually do anything fun it seems to feel like less of a break than if you actually let your hair down a bit!  Well this Christmas was definitely different. I had a lovely Christmas Day lunch with my family and a friend. I made rack of lamb and gratin, which turned out pretty well, followed by fruit salad because I find the food over the holidays way, way too heavy. My oldest mentioned that the Irish comedian Dara O'Briain was appearing in Geneva at the end of January so seven of us have booked tickets for that. Dara is hilarious and it will be so nice to go out with my kids so I am really looking forward to it.

Then, as I mentioned yesterday, Steve came out from England for the new year. As he arrived early in the morning we went straight from the airport to Annecy (trying to pack in as much as possible of course). The Christmas market was still on so we had a lovely time, eating tartiflette and wandering round the market and the old town.

(I couldn't get a decent picture of the stands so I have just included a shot of what was the old prison "in the day" as the market takes place all around that area). While it was busy it wasn't heaving so that proved a nice start to his stay. 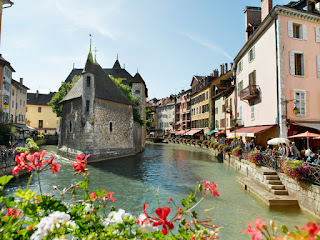 The next day we headed up to my favourite ski resort of La Clusaz (about 40 minutes from home). Again beautiful weather but no snow. La Clusaz is a medium-sized resort and they just don't have the capability to manufacture snow on such a large scale so I hate to think how much money they would be losing. The daily ski lift was €37 and someone mentioned that they could expect 20,000 visitors (per day? per Christmas week?  - I'm not sure) but in any case it must be fairly catastrophic for the lift operators, the seasonal workers, the restaurants etc., not to mention how disappointing it would be to people who had reserved accommodation for the Christmas week. There were a few small groups of ski classes but only for the toddlers as there just wasn't the snow (although the kids looked great all decked out in their ski gear). We decided to take the cable car up to the Plateau de Beauregard which should have been covered in snow but there was none! We had a lovely lunch outside on the terrace and while admittedly our restaurant was packed ... oh my goodness, how much money must they have been losing over the Christmas break! 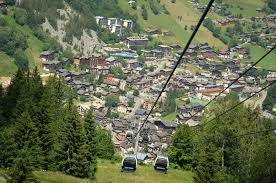 I posted yesterday about the lovely time we had on New Year's Eve at Lavey and Evian so on New Year's Day, as we had stayed up till 5 a.m., we decided to spend the day at home slobbing around and putting the world to rights. Since we can both yack for England that wasn't a problem!

For his return flight I had told Steve to book as late a flight as possible just in case we got hammered by snow/traffic. That gave us time to have a wander around Yvoire (a medieval village on the lake) and then a quick lunch in Geneva's old town before I took him off to the airport.

There was hardly anything open at Yvoire, of course, but we were still able to have a walk around and a coffee.  Very few shops were open but while everything was pretty, all Christmasy and so on, this lady mannequin caught my eye! 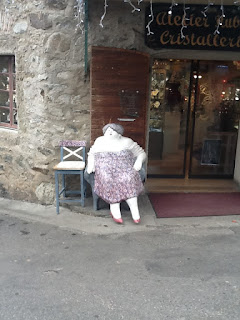 It was kinda scary thinking that if I don't do anything about my weight before my son's wedding I might end up looking like that so now it's time to get serious (to be fair, I have been good so far since returning to work, exercising, walking, gym etc. - so just another 180 days to go then!).

It's Steve's birthday next week and as I was taking down the Christmas cards I had a wonderful idea! Steve and I are both divorced and while we have had relationships both of us are pretty adamant that we will never get married again, nor will we ever live with someone again (I know you can never say "never", but I'm pretty sure "never" means "never")! We both own our own homes and neither of us are of an age to start again or feel inclined to say to another "significant other" during a second divorce "here, take 50% of the home I bought with my own money"! He refers to himself as a king in his own little castle, so I guess that makes me a queen. So after cutting, sticking and pasting (all with my tongue sticking out), I just sent him this birthday card (I had to black out his last name for obvious reasons).  Happy birthday Steve!